A war has broken out in a Cornish seaside town as locals clash with ‘scruffy’ street traders who do hair braids and henna tattoos.

The hair and ink artists have been plying their trade near the harbour of Padstow in Cornwall for decades to capture tourism income.

But locals in the upmarket resort – known as Padstein for the influence of celebrity chef Rick Stein – are demanding they are booted out as they are not in keeping with the surroundings.

The spat has spiralled to include local Conservative MP Scott Mann, who has raised the issue in parliament.

Hair and ink artists (pictured: Cher Ricard and Natasha Rowley) have been plying their trade near the harbour of Padstow in Cornwall for decades to capture tourism income 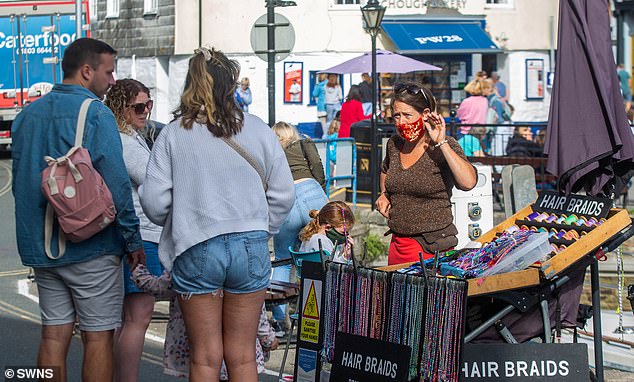 A war has broken out amongst the Cornish locals and the traders, who say a ‘vigilante hate group’ has launched a targeted campaign against them

Since lockdown was lifted, several of the hair braiders claim they are now being harassed and verbally abused on a regular basis.

They have even labelled a section of the local community a ‘vigilante hate group’ for what they described as a sustained and targeted campaign.

The divide has now reached an all-time high and has even led to calls from MP Mr Mann for the traders to be removed.

He described them this week as ‘so-called businesses’ but several of the traders have responded calling for a truce and a better understanding of what they do.

During the recent staycation boom, they also claim they have been more popular than ever with tourists.

Healso runs a fish and chip shop in the town. 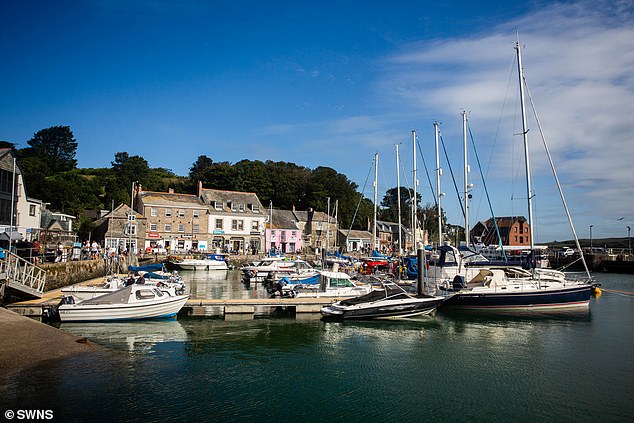 And despite claiming to bring further money and footfall into the town, the traders claim a ‘hateful’ closed facebook group has been plotting ways to remove them altogether.

Natasha Rowley, 47, said they have consistently proved they had done nothing wrong.

She said: ‘I’ve been doing this for 23 years and 11 years in Padstow and we have always had some animosity from a few locals.

‘They think we are not legitimate traders and not very educated. In the past there has been a bit of moaning and this and that. 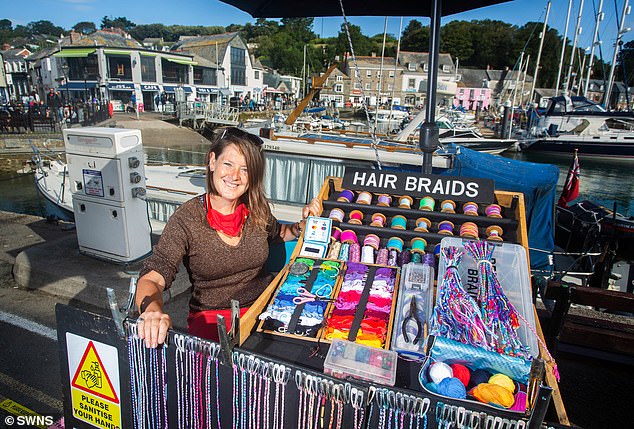 Natasha Rowley, 47, pictured while working at Padstow harbour, said the traders have faced abuse despite ‘consistently proving they had done nothing wrong’ 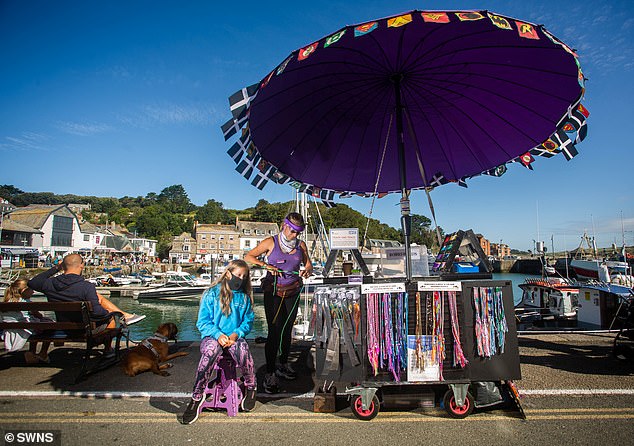 ‘But with Covid things have really turned nasty. They don’t understand we are insured the same way as hairdressers.

‘They have been coming up and down the street shouting and swearing.

‘One lady was given such a horrible amount of abuse first thing in the morning she was reduced to tears.

‘This is nothing more than bullying and harassment. It has really affected some of us. 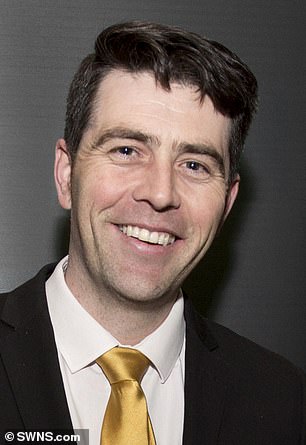 ‘It is by no means everyone, but there is a small percentage of Padstow that operate like this.

‘They have an issue with us and seem to have some influence within the town council that creates problems.

‘There could be some snobbery, but I think it is more that they are just not educated.’

Another hair braider Cher Ricard, also 47, said: ‘They are totally uneducated and just don’t think we are legitimate.

‘They wrongly think we are not insured or registered with HMRC but we are here in all weathers, 60-70 hours a week, providing a valuable service.

‘They seem to think we are stealing money from them.

‘People say they are worried about chain stores, but we create a vibrancy and a holiday memory for visitors that they keep coming back to.

‘We have been used to people saying nasty things on social media but we haven’t suffered this level of verbal abuse until this year. It was after coronavirus it really accelerated.

‘The MP has even tried to take the issue to parliament and get us shut down.

‘Every year we receive so much vitriol from a Padstow residents vigilante hate group. 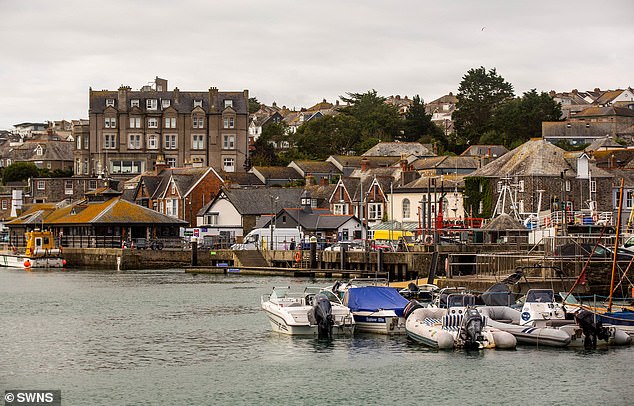 ‘The few shops and residents that show us any kindness get pressured so badly they end up forced to refuse us the simple use of a toilet for example.

‘We have ignored the threats and petty school room attitudes for ten years but with Covid things have turned really nasty and need to stop.’

Natasha added: ‘We have put up with this for years but we just want it to end.

‘The tourists love us but we know there is a nasty element in Padstow that has a problem with us.

‘Some of these are influential people and the hardest thing is seeing our friends being bullied and harassed. 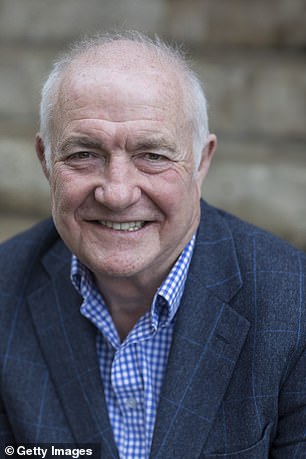 ‘We should be part of people’s holiday but they are just spreading hate. They are always shouting aggressively at us and being nasty.

‘It is constant and they will probably not stop until we go. But we are not going anywhere.

‘It is the behavior of nasty school bullies.

‘The tourists don’t see us as an eyesore. They see us as colourful and vibrant.

‘But coronavirus has seen some locals vent their frustrations a lot more and things have got a bit out of hand.’

‘People come to Padstow because of what we do. It is a place most know for a celebrity chef, but is also a place known for hair braiding.

‘But the locals like to swear at us. We have been called an eyesore and accused of not paying tax or using card machines.

‘They just don’t think we contribute to society in a positive way but they just see what they want to see.

‘All we ask is for a truce and for them to take a step back and really see what we do.’

Scott Mann MP confirmed he had raised the issue of the street traders in parliament and said he was still working to try to find a way to move them on.

He said: ‘We have been working with all the stakeholders in Padstow on this issue. It can never be right that these so-called “businesses” can trade from the quay without paying rates whilst disrupting businesses working in a legitimate way.

‘Whilst local solutions are being worked on to remove them from working around the quay, there needs to be a change in the licensing laws to ensure henna tattooists and hair braiders are classified as street traders and treated like others.

‘Any commercial enterprise whether it is a street trader or fixed premises should be subject to the same rules, regulations and taxation.’

Cornwall Council said: ‘Due to the fact hair braiders have no fixed base of work, they are not governed by street trading laws and therefore do not need to obtain a formal consent from Cornwall Council.

‘The Health & Safety Executive (HSE) has enforcing powers on this type of work and police could use enforcement powers if operators were causing an obstruction.’