A love story about an engaged, precious, young socialite from a wealthy, New York family who reunites with a righteous eco-warrior she met years earlier at a glamorous wedding on the Italian island of Capri is set to be the novel of the summer.

Sex and Vanity, the latest offering from Crazy Rich Asians author Kevin Kwan, has already won rave reviews, with the Atlantic branding it ‘The Shakespeare of Status Anxiety’ and Town and Country calling it ‘a razor-sharp take on the one percent’.

It tells the tale of the very glamorous life of Manhattan’s elite, and even features a fictionalised version of Cornelia Guest – the goddaughter of King Edward VIII and Wallis Simpson, an old friend of Kwan.

Speaking to Tatler, Kwan said the novel is inspired by his own entry into ‘the real Gossip Girl world’ which included ‘running with Park Avenue Princesses’ who flit between ‘six parties at night, heading uptown, downtown, staying out until dawn and appearing in the tabloids the next morning’.

Sex and Vanity, the latest offering from Crazy Rich Asians author Kevin Kwan, has already won rave reviews. It tells the tale of the very glamorous life of Manhattan’s elite, and even features a a fictionalised version of Cornelia Guest (pictured in 1989) – the goddaughter of King Edward VIII and Wallis Simpson, and old friend of Kwan 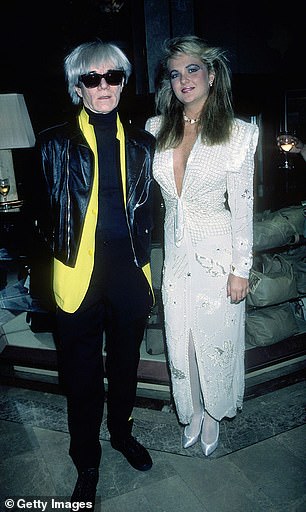 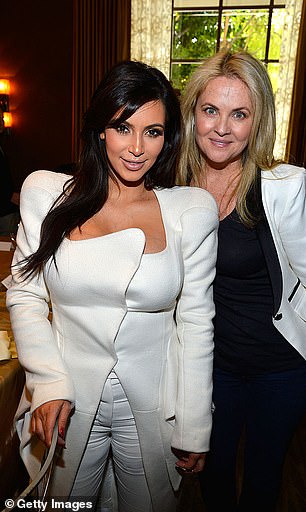 Guest, a former debutante who was childhood friends with Truman Capote and ‘BFFs with Andy Warhol ‘(left in  1985) has become an animal rights activist in recent years. She is pictured left with Kim Kardashain at DuJour magazine’s Spring issue in 2013

Guest, a former debutante who was childhood friends with Truman Capote and ‘BFFs with Andy Warhol’ has become an animal rights activist in recent years.

Her real-life passion is reflected in the fiction, which includes a scene at a glitzy gala to raise funds for an animal shelter gala, where the socialite’s pet dogs eat all the canapés for the high society guests.

‘Cornelia is someone who really epitomises the Park Avenue princess, she was cool enough that she spent most of her time downtown, partying with Andy Warhol at Studio 54. She straddled both worlds. And in a strange way, I did that too,’ Kwan added to Tatler.Lucie Tang Churchill

Many have drawn comparisons from the racy novel to the Cecily von Ziegesar’s Gossip Girl books which became a huge Noughties TV hit. 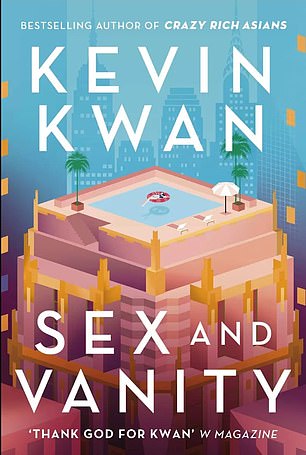 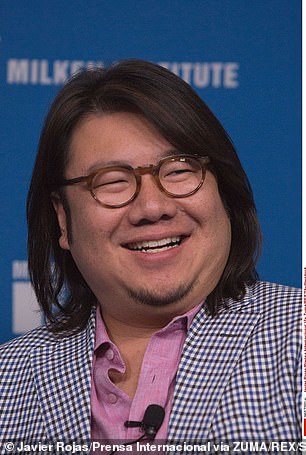 Speaking to Tatle , Kwan (right) said the novel is inspired by his own entry into ‘the real Gossip Girl world’ which included ‘running with Park Avenue Princesses’ who flit between ‘six parties at night, heading uptown, downtown, staying out until dawn and appearing in the tabloids the next morning’. The book jacket is pictured left

Extract from Sex and Vanity

Cecil pulled her toward him and began kissing her neck, reaching that sweet spot right below her ear.

Lucie sighed softly in languorous pleasure. “Er … will you do Lady Mary, please?”

“Okay.” Lucie nodded, clearing her throat and breaking out her best British accent:

“What on God’s earth are you doing here? I really don’t think it’s appropriate for you to be in my bedchamber, sir.”

“I couldn’t resist, I had to see you! Please, let me worship you in my seraglio and bring you to the gates of paradise,” Cecil said in a vaguely Omar Sharif–esque accent.

“But my lady’s maid could discover us at any minute.”

“Don’t worry, I gave Anna a very generous tip to disappear. Besides, she’s too busy schtupping that gimp Bates in the servants’ quarters to notice your cries of pleasure tonight.”

“No, you’re wrong. Anna is always watching over me.”

“Well, let me watch over this,” Cecil said as he slowly unhooked Lucie’s bra from behind.

As she turned to face him, he stared at her with his mouth agape. “Don’t move!” he whispered, utterly transfixed by the sight of her body.

As he traced the curve of her breasts with his finger, he muttered,

He buried his face into her chest as she began to unzip his perfectly pressed Dormeuil trousers.

“Mr. Pamuk!” Lucie let out an exaggerated gasp. “My goodness, is this what happens to boys who eat too much Turkish delight?”

“Sorry, Lady Mary isn’t doing it for me tonight. Can we transition to Alexandra?”

Lucie almost wanted to roll her eyes. She was enjoying the Lady Mary pantomime, but she knew this was going to happen—Cecil always ended up wanting Alexandra.

As if sensing her reticence, Cecil pleaded, “I promise this is the only time I’ll ask you for the rest of the month.”

“Well, in that case …” Lucie gave him a mischievous smile and took a deep breath, raised her arm, and slapped him clear across the face. Cecil gasped loudly, grinning.

“You peasant! How dare you insult me with your … your filthy Rasputin?” Lucie roared with outrage.

“Tell me about the heirloom dagger! Tell me more about it, baby,” Cecil grunted, his jaw clenched and his breath quickening.

“It’s a scimitar with a gold filigree handle studded with ancient Burmese jade and a scabbard crafted of lapis lazuli and inlaid amber. The razor-sharp blade is hand-forged of meteoric iron, hardened and hardened by centuries of pounding against the jagged steppes of the Caucasus.”

“Agggrrrhhhh!” Cecil shuddered in ecstasy, hugging Lucie tightly as he began sobbing against her shoulder like a little boy.

Excited readers have already given the novel, released last week, rave reviews on Goodreads, calling it a ‘read in one sitting’ kind of book and ‘the perfect summer read’.

Others compared it to E.M. Forster’s A Room With A View and called it a fun romp.

‘The Crazy Rich Asians trilogy will always be my must-read classics. So happy to finally have my hands on Kevin Kwan’s new book SEX AND VANITY. I’m ready!!!’ wrote one.

‘Stayed up half the night reading Kevin Kwan’s “Sex and Vanity” and all I can say is that it’s different from “Crazy Rich Asians” and more thought-provoking,’ another penned.

‘Ordered the eBook as soon as I heard about this — it was a ‘read in one sitting’ kind of book, and I loved everything about it. The perfect summer read,’ commented a third. 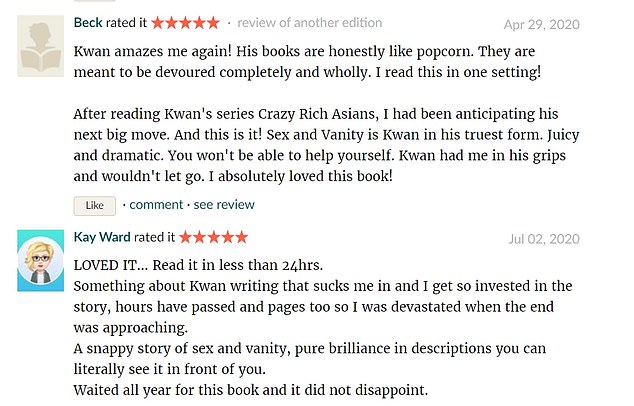 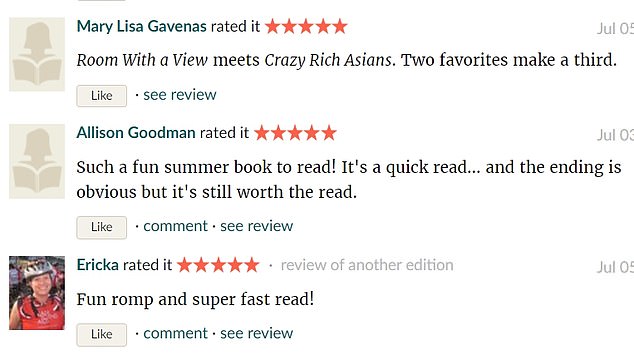 Excited readers have already given the novel, released last week, rave reviews, calling it a ‘read in one sitting’ kind of book and ‘the perfect summer read’ (pictured)

Kwan has described the book as ‘a love letter to New York’ and it follows his smash hit trilogy Crazy Rich Asians, which was adapted into a hit film which grossed $283 million (£225 million) in 2018.

Like Gossip Girl, Sex and Vanity is set in the Big Apple and explores the very glamorous and often scandalous lives of wealthy socialites – including the rapacious nouveau riche –  and their interactions with high and mighty old money families, Waspy Upper East siders, and dynasties of Asian American Wall Street families.

It focuses on the tale of Lucie Tang Churchill, a biracial New Yorker whose mother is of Chinese descent and has ‘Wall Street money,’ while her father ‘came over on the Mayflower’ and has generational wealth. 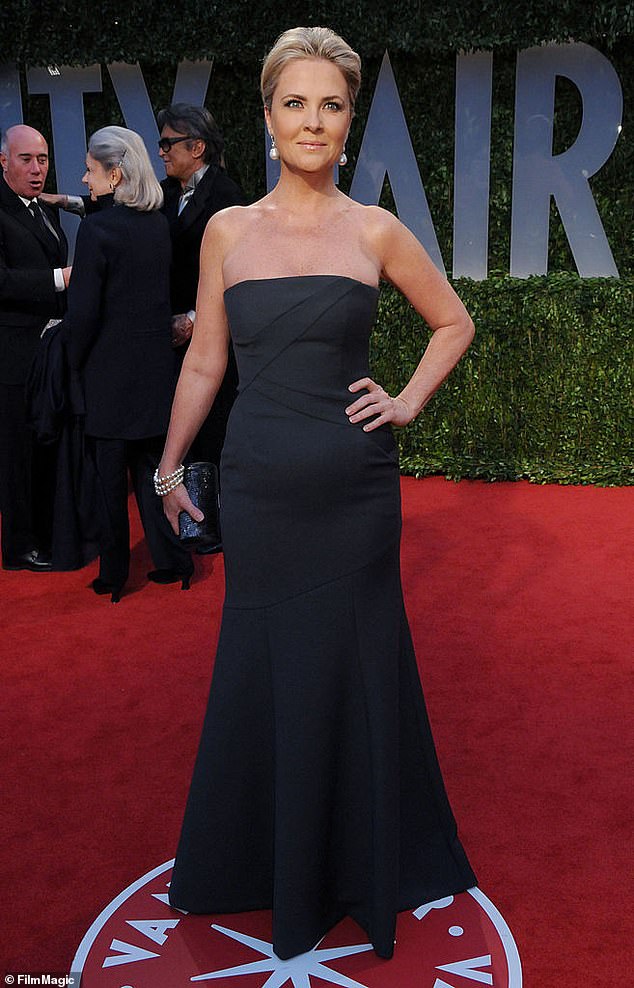 Cornelia Guest, the real life socialist who stars in the racy, glitzy, novel, is pictured in a stunning  black gown at the 2009 Vanity Fair Oscar’s Party

The novel opens with the nuptials of a Tatler-cover girl and Taiwanese heiress to an Italian count on the idyllic island of Capri.

She considers him ‘a brooding weirdo that takes himself much too seriously’, but a spark quickly develops between the diametrically opposed pair.

Unsure what her parents will think of the Hong Kong surfer boy, Lucie flees the  island and returns to the comfort of the Upper East Side. 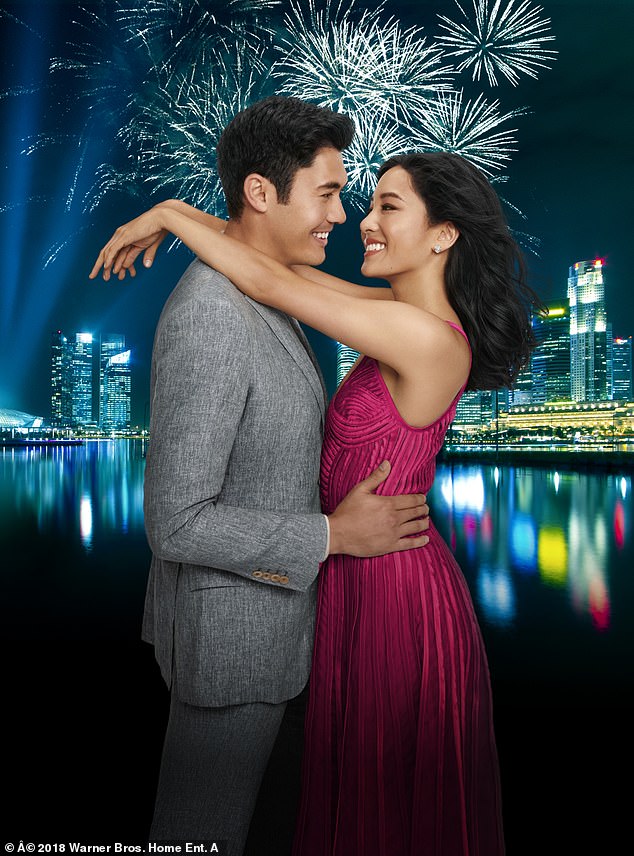 Kwan has described the book as ‘a love letter to New York’ and it follows his smash hit trilogy Crazy Rich Asians, which was adapted into a hit film which grossed $283 million (£225 million) in 2018.  The film starred Constance Wu and Henry Golding (pictured)

The reader next meets Lucie five years later, where she’s engaged to a ludicrous, Instagram-obsessed billionaire millennial (referred to as a ‘billennial’) called Cecil.

Cecil is described as ‘Armie Hammer handsome’, and one of the most desirable bachelor’s on the planet. He gives Lucie a ring ‘the size of a rhino’s testicle’.

Kwan based ‘ghastly’ Cecil on an amalgam of friends he knew in New York, but says the character provokes sympathy as the amount of money they’re born into creates a toxic lifestyle.

‘[Lucie’s] life, her image, her whole being up till this point, had been a study in perfection,’ Kwan tells the reader.

‘She had gone to Brearley [an all-girls private school on the Upper East Side of Manhattan] and had always been popular as Lucie Tang Churchill, the cool half-Asian girl. She had graduated from Brown with honors. 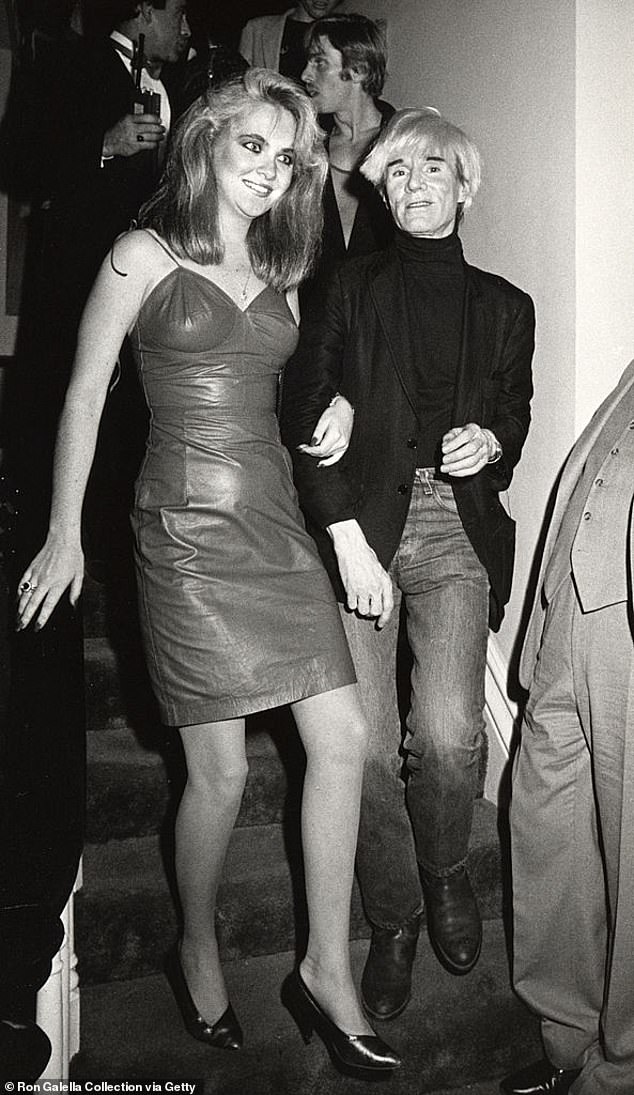 Cornelia made her name in the 1980s as an IT girl and friend of many stars – including Andy Warhol. Pictured, together in New York

‘She had landed her dream job with the coolest company in town, and she was about to marry a dashing, erudite gentleman whom even Esquire proclaimed “The Most Desired Dude on the Planet.”

‘They would live in an exquisitely original town house in the West Village, summer in East Hampton, and maybe even get a place in Provence.

But when Lucie comes across George again in a yoga class, she’s reminded of her old feelings – and notions of old-fashioned propriety are set against a whirlwind of trendy restaurants, ultra-fashionable clothes, high-tech drones and cocaine-fuelled parties.

Her conflict continues throughout the novel, with Kwan also exploring her complicated emotions about being biracial. 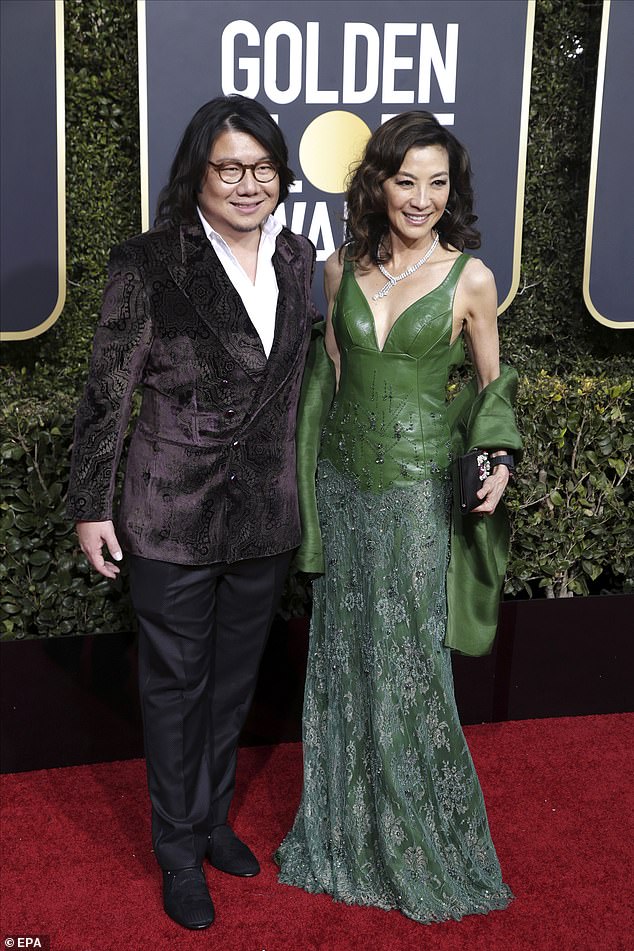 Her mother was born in Seattle, but she often gets asked ‘where are you from’, she resents her brother for looking more Caucasian than her, and George’s Asian background is the reason she doesn’t immediately fall for him – despite electric, exciting sex scenes.

Kwan also pokes fun at the one per cent in the novel. Every time a new character is introduced, he gives their full educational history in brackets, starting at pre-school, such as ‘I’m Renee Pike (Saint Cecilia / Port Neches Middle School / Central Senior High / UT / Harvard Business School).’

While he admits he’s poking fun of it, Kwan added to Town and Country it was inspired by real life as it’s ‘the most New York thing’.

‘You go to any cocktail party, and people name drop their schools within the first five minutes. It’s a way of connection, but it’s a portrait of a person in five words.’

The novel is the first in a trilogy, with the second set to explore London’s upper class and the third will take the protagonists to Paris.