A pawsome slam dunk! Corgi with a natural talent for basketball goes viral after owner shares videos of the pup sending the ball into the hoop and scoring every time

A corgi who has won legions of fans with her talent for basketball is back with another video showing off her impressive skills.

Lilo, a six-year-old Pembroke Welsh Corgi from Houston, Texas went viral last year after her owner, Denny Ku, 29, taught her how to shoot hoops during lockdown.

A new video of Lilo is making the rounds on Twitter after it was shared by another famed corgi account, where the pup shows her well-developed skills at ‘trick shots,’ bouncing the ball on the wall or a lamp before it went into the hoop.

People have been raving about the talented pup, sharing how they would like to be able to train their own dogs to be like Lilo, who’s earned herself the nickname ‘Steph Furry,’ after the basketball player Stephen Curry.

‘She protec, her stroke is hot, she’s steph furry with the shot,’ wrote the account Pavlov the Corgi, sharing a video of pup sending balls into the basket with Denny. 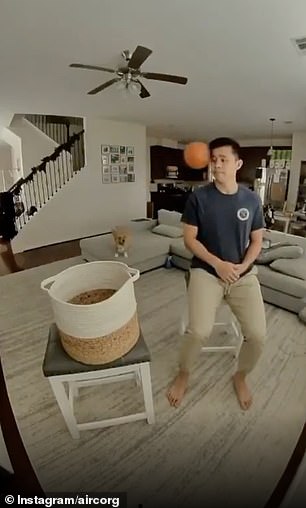 Lilo, a six-years-old Welsh Pembroke Corgi from Houston Texas is getting some love online after another Corgi account shared videos of the pup shooting basketball hoops with her owner

In the video, the unstoppable pup could be seen scoring from different angles and completing several trick shots.

Denny, confident in his corgi’s basketball abilities, threw the ball behind him, not even making sure if Lilo would catch it.

The corgi, who was standing at the top of Ku’s stairs, bopped the ball with her nose into a basket place at the bottom of the stairs.

In a second clip in the same video, Ku and Lilo were in the living-room. The corgi managed to shoot the ball from the couch into the basket. 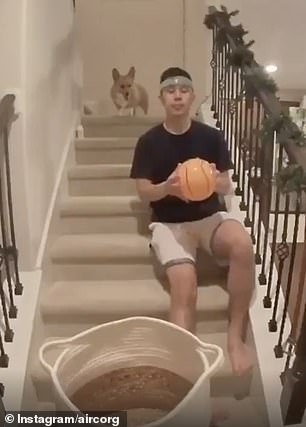 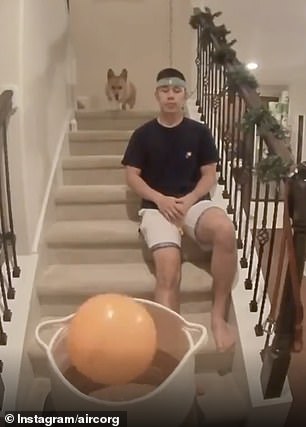 In a recent video, Denny, 29 and Lilo, both pictures, showed their skills by playing doggy basketball in their stairs

Ku, who was sat in front of his dog but saw him score, celebrated by punching the air.

Later on, Ku was seen throwing the ball while working at the desk in his bedroom.

Lilo, who was on the floor, easily sent the ball into the basket, which was propped on the desk next to Ku.

The last video was a blooper which showed how Lilo had thrown the ball towards Ku so it’d bounce off his head while trying to shoot the ball in the living-room. 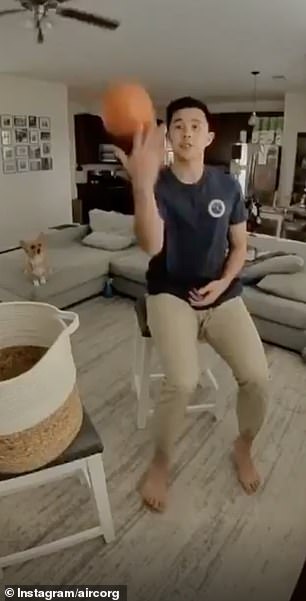 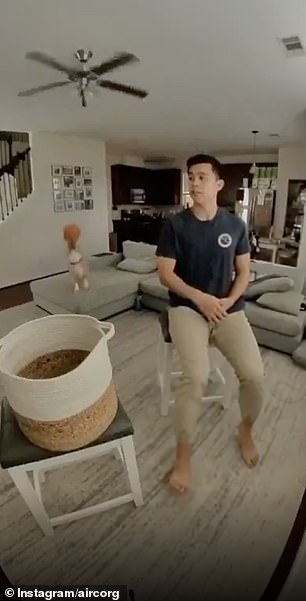 Ku is so confident in the abilities of his Corgi that he has started to throw the ball without looking whether Lilo would catch it with her nose, pictured

After the new video went viral online, people said they wished their dogs were like Lilo.

‘I should get that dog,’ one joke.

‘I wish I could train my corgydor like her,’ one said.

‘Omg this is incredible! The athleticism,’ said another.

‘This gave me goosebumps,’ one said.