A policeman standing just 5ft 2in has revealed how a relentless 14-year campaign of bullying by his colleagues first began and what drove him to to consider legal action.

Alan Thorn, 64, first joined the force when he was 48 and during training one of his instructors gave him a cruel nickname because of his height that stuck.

‘He called me Frodo. I had no idea what Frodo meant until I asked one of the young blokes there and he informed me it was a hobbit out of Lord of the Rings,’ he told A Current Affair.

‘I don’t believe a lot of people would have known my real name, they just knew me as Frodo.’

The torment gradually got worse and the father-of-two claims he now suffers depression, anxiety and PTSD due to ‘systematic’ bullying from his co-workers at a Sydney police station.

A 5ft 2in policeman, Alan Thorn (pictured on A Current Affair), has revealed how a relentless 14-year campaign of bullying by his colleagues first began 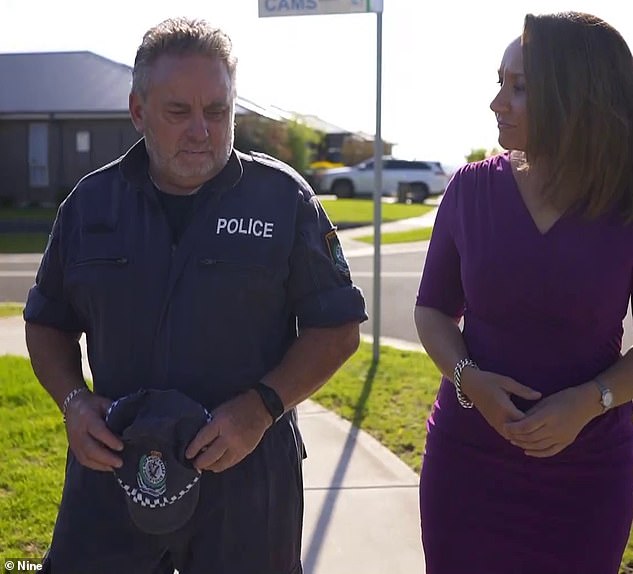 One Christmas he was given a garden gnome as his secret Santa gift and colleagues started calling him ‘Papa Smurf’.

His workplace became even more toxic when Campbelltown Station cops plastered a wall with images of dwarfs and crude memes, nicknaming it the ‘The Great Little Wall of Thorny’

‘I’ve been this height since I was 14. I just didn’t grow,’ he told the program.

‘But I’m still as hard and as tough as you blokes.’

At first he said the insults were ‘like water off a duck’s back’ but it eventually became too much to bear and he was forced to take stress leave.

‘I don’t really want to put up with this but I don’t want to make myself a target either. I didn’t want to be seen as weak I suppose,’ Mr Thorn said.

‘If you show weakness as a cop whether it’s to the outside or the inside, you get targeted. 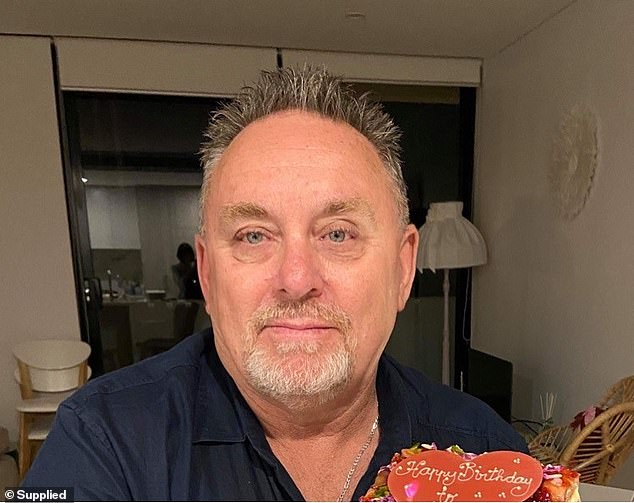 Alan Thorn, 64, (pictured) said he has been left suffering depression, anxiety and PTSD following ‘systematic’ bullying from his co-workers at a Sydney police station 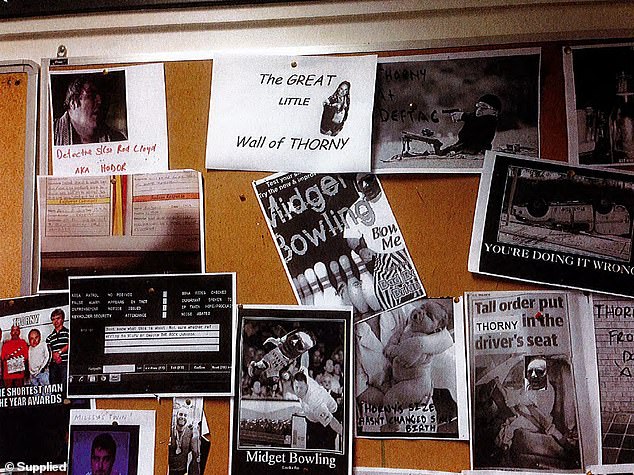 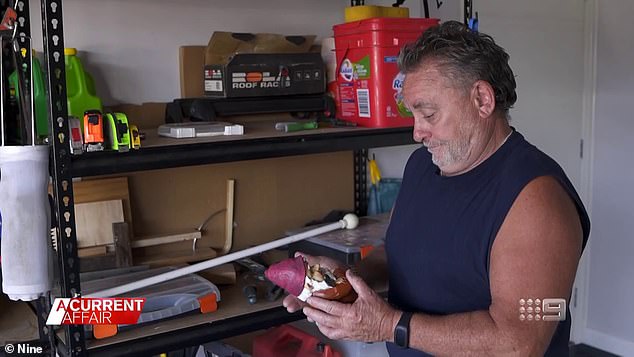 Officers went to the trouble of superimposing his face onto images and putting them up on the ‘meme wall’, with one depicting a pair of baby shoes with the caption ‘Thorny’s new work boots’.

Mr Thorn is also seen being used as a bowling ball in ‘midget bowling’, doing random breath tests in a toy car and attending the ‘Shortest Man of the Year’ awards.

He claims his colleagues left phone books in police trucks to help him reach the pedals and that he once found a clock hung low on the wall with the note: ‘Who allowed Thorny to put up the clock?’

When Mr Thorn returned to work after receiving treatment for prostate cancer in 2017, the bullying continued and he found a catheter bag in his pigeon hole on display for everyone to see. 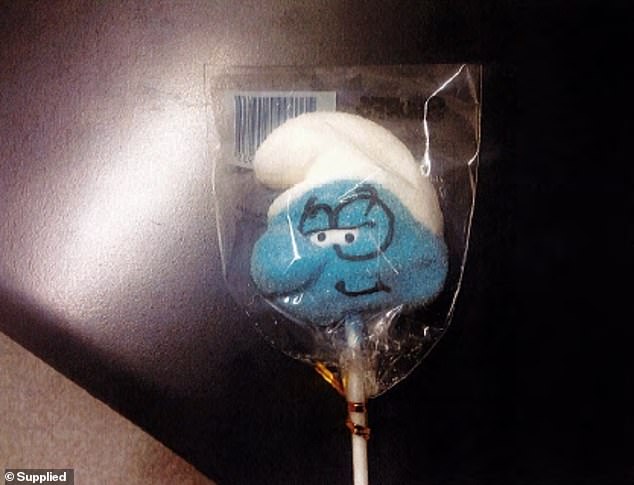 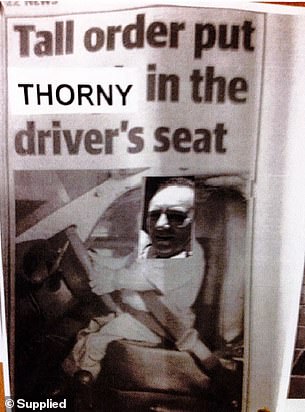 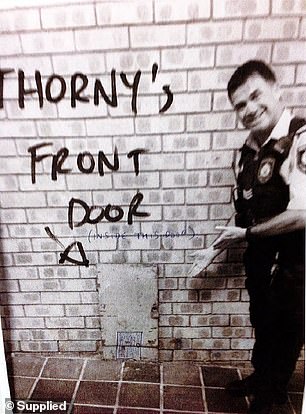 Mr Thorn’s face was superimposed on a variety of crude memes on a ‘banter wall’, a common feature in police stations across Sydney, his lawyers has said

His lawyer Paul James from Operation Legal Australia said the urine drain was put there to make light of incontinence issues sometimes experienced by patients.

‘I just couldn’t believe that a workplace would have such material up on the wall,’ he said.

‘This is what happens when you have a workplace culture that isn’t checked over time.

‘We even had a situation where a detective superintendent laughed at that board and just walked past it.’

The director of the Wollongong firm wrote to Police Minister David Elliott to demand the NSW Police Force issue an apology.

Mr James told Daily Mail Australia ‘banter walls’ like the one used to mock his client were a common feature in police stations across Sydney.

However, he said the crude images came at a time when Mr Thorn’s mother had just died, he received his cancer diagnosis, and was trying to resolve disciplinary issues at work.

The lawyer said not a single police officer was investigated for the wall of shame his client was forced to look at every day from 2011 to 2015.

In the letter addressed to the police minister Mr James wrote: ‘No commander, inspector, or sergeant thought it was inappropriate as they simply walked past it.

‘They condone the workplace bullying for an extended period and did nothing.’

He described his client’s treatment as ‘tax payer funded workplace bullying’ and said the wall was a complete waste of police time and resources. 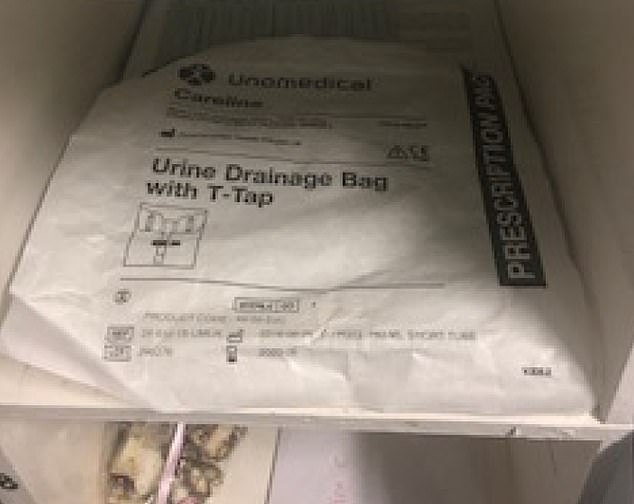 When Mr Thorn returned to work after receiving treatment for prostate cancer in 2017, he found a catheter bag in his pigeon hole on display for everyone to see (pictured) 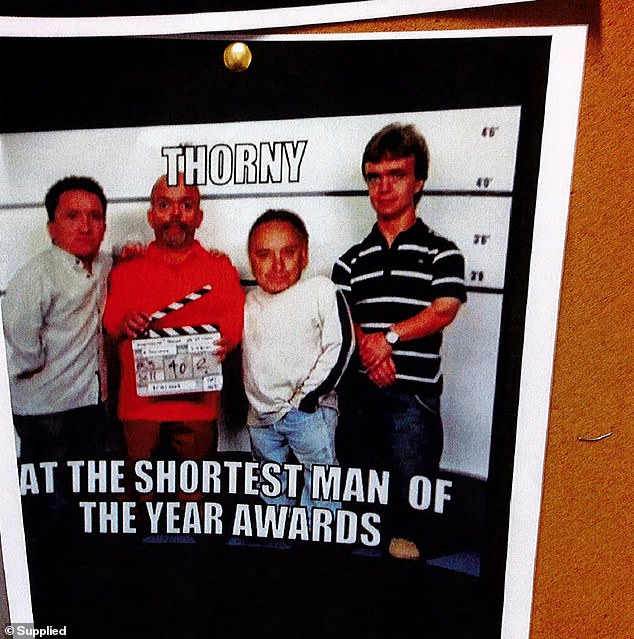 Mr Thorn’s lawyer has demanded an apology from the NSW Police Force for the alleged bullying his client endured for 14 years at a Sydney station (pictured, the ‘banter wall’) 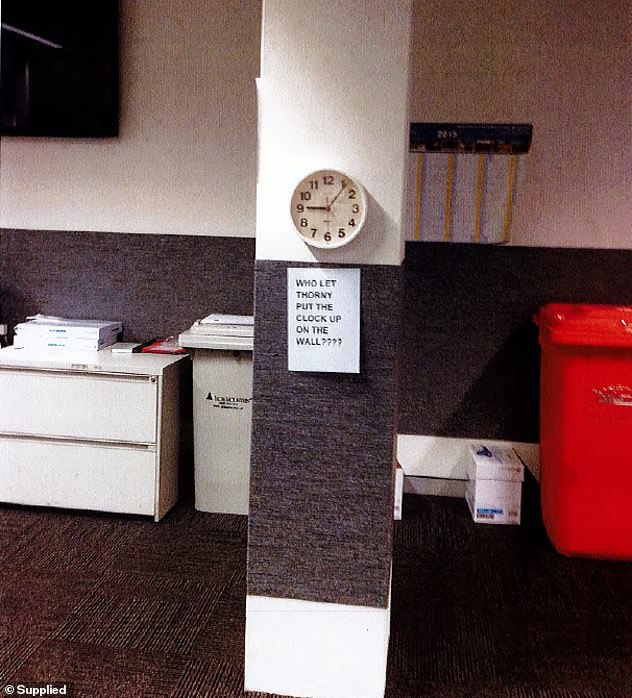 Mr Thorn once found a clock hung low on the station wall with the note: ‘Who allowed Thorny to put up the clock?’ (pictured)

Mr James called for the independent watchdog – the Law Enforcement Conduct Commission – to launch an investigation into the alleged bullying and provide Mr Thorn with compensation for mediation and legal fees.

‘The Commissioner of Police must be informed to take steps to ensure all commands undertake an audit to ensure no other police station has displayed materials on walls, lockers, doors that may be deemed offensive, or amount to workplace bullying and harassment,’ the letter states.

Mr Thorn has previously complained to the station’s HR department who in turn sent out a strong-worded email telling staff involved it was ‘time to grow up’. 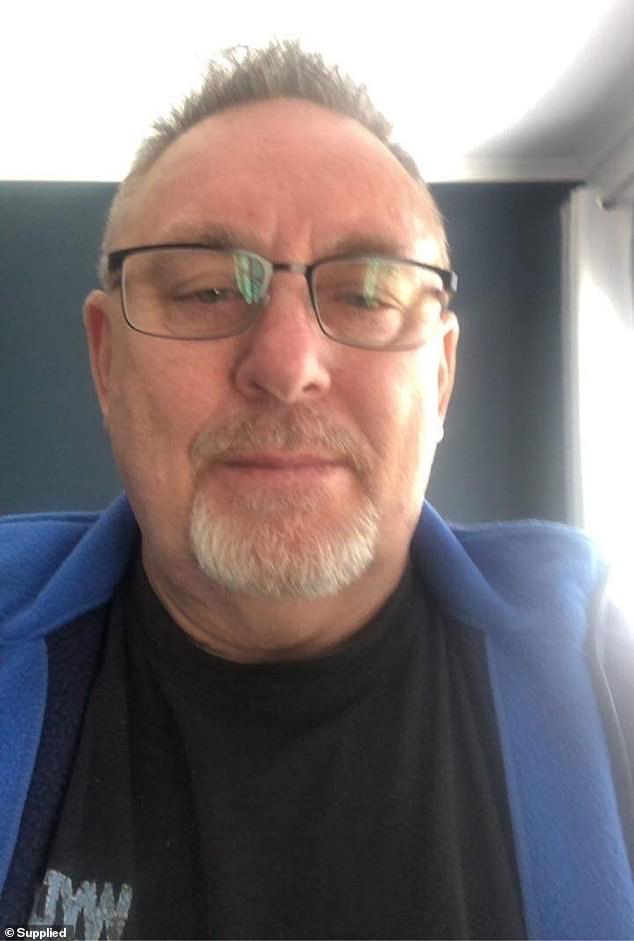 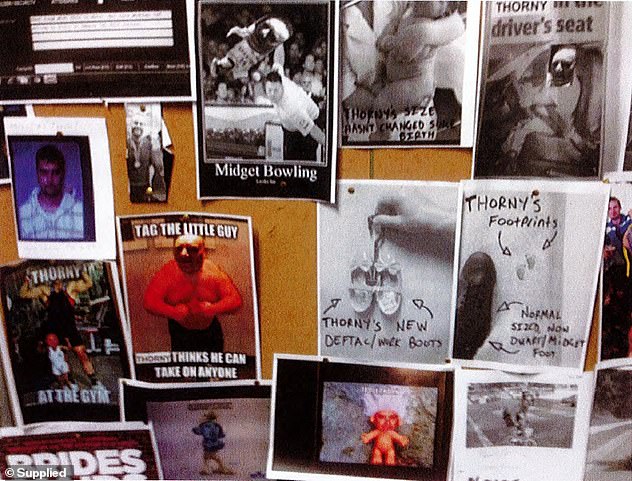 Officers had gone to the trouble of superimposing his face onto the images, with one depicting a pair of baby shoes with the caption ‘Thorny’s new work boots’ (pictured)

The email encouraged officers to abide by the code of conduct but did little to curb the alleged bullying that continued for years with no signs of slowing down.

Recently, a colleague texted the officer a meme about ‘Throw a Short Person Day’ after he returned to work after cancer treatments.

The cruel ‘holiday’ is considered as a chance to ‘grab your friend and throw them, drag them, or do anything to them because they’re short!’

‘Must be 5’4 or over to throw someone. Everyone under… you better hide.’

Many of Mr Thorn’s struggles were compounded when he was reprimanded for disciplinary action for entering into a relationship with a victim of domestic violence he had responded to.

‘It had happened seven or eight months after the incident. I thought it was long enough but I was informed that it’s never long enough,’ he said. 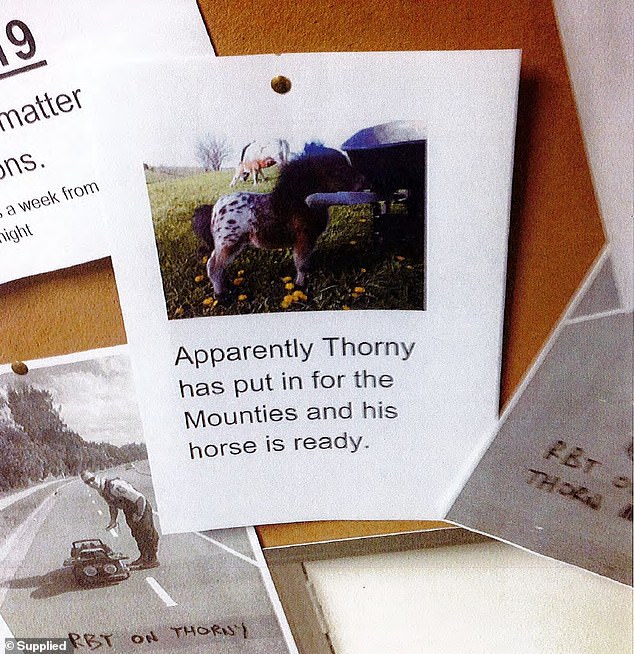 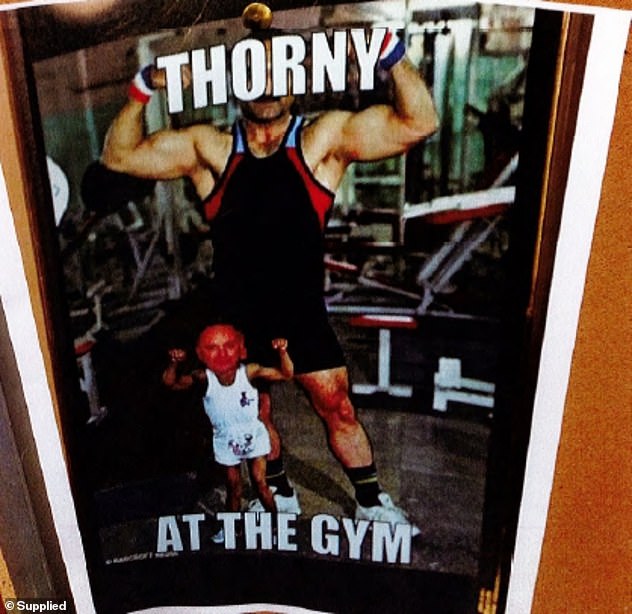 A NSW Police spokesperson said the force does not tolerate bullying and harassment in the workplace (pictured, a meme from the station’s ‘banter wall’)

NSW Police told Daily Mail Australia it did not tolerate bullying and harassment in the workplace.

‘All employees are expected to comply with the Code of Conduct and Ethics,’ it said.

‘The command has been advised of an appeal being lodged before the Industrial Relations Commission and as such, we are unable to provide comment.’

Mr Thorn said he just wants police to accept that ‘these thing happened’ and for it to be stopped.

‘Get off you backsides and do something serious or you’re going to lose people left right and centre,’ he said.