A glamorous conwoman who led a lavish lifestyle of holidays and shopping by ripping off victims through online property rental fraud is behind bars after returning to the UK.

Leah Farley, 31, spent two years dodging the authorities in Turkey after she failed to turn up to court for sentencing.

She was finally arrested when she handed herself into police at Birmingham airport when she flew back from Turkey on Thursday night. 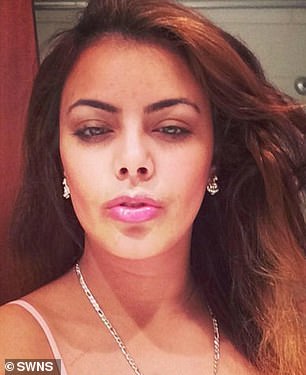 Leah Farley (pictured), 31, was the ringleader of a gang who carried out online property rental fraud. She was finally arrested on Thursday night after handing herself into police

Farley was the ringleader of a gang who carried out multiple scams involving rental properties and sales of electronic goods online.

The thousands she made by swindling her victims went on nights out, clothes and lavish foreign holidays.

Farley – who was jailed for 44 months in her absence in 2017 – was due to appear at Wolverhampton Crown Court today.

She was first arrested in September 2015 and eventually pleaded guilty to her crimes in January 2017 after a lengthy investigation.

This led to the arrests of two accomplices Martie Verdie, 29, and Emran Meah, 25.

Verdie, from Smethwick, was jailed for four years while Meah was fined £3,000 and given 240 hours of unpaid work.

Farley recruited the pair to help her set up fake sales profiles on property rental websites, where she advertised properties for rent.

She also manipulated friends, family and even a man with learning difficulties into having money paid into their bank accounts, telling them it was assisting her in receiving benefits for her children.

All three were charged in November 2016 with conspiring to commit fraud by false representation between October 2013 and October 2015.

Farley skipped the country in November 2017 days before she was due to be sentenced for her part in the online scams.

She was jailed in her absence at Birmingham Crown Court and ordered to repay the full amount of her ill-gotten gains. 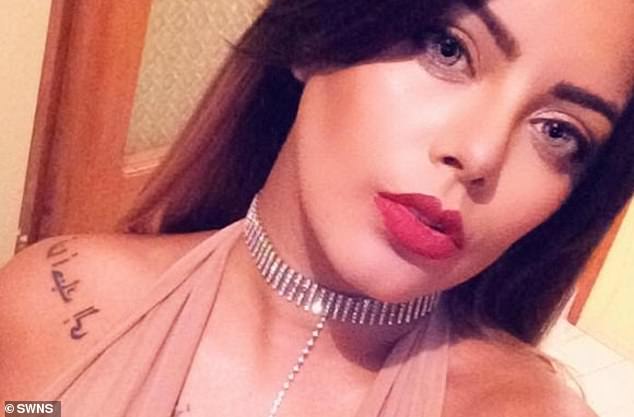 Farley, above, was first arrested in September 2015 and eventually pleaded guilty to her crimes in January 2017 after a lengthy investigation, before fleeing the UK

The court heard mobile phone buyers and house hunters were collectively duped out of £17,500.

Farley and her accomplices created fake Facebook accounts where they claimed to be selling iPhones and other mobiles at knockdown prices.

Dozens of people fell for their lies that the phones could be bought at bargain prices as they had contacts who snapped them up cheaply at police auctions.

Farley, of Northfield, West Midlands, supplemented her fraudulent income by also purporting to be a landlord offering properties to rent online.

The sophisticated fraudster stole a passport from a Birmingham apartment in 2012 which she used to set up a website selling non-existent goods and property.

In 2015 she conned four people into handing over deposits of around £1,000 to secure flats advertised on the website Open Rent.

However, none of the rentals existed and some of the house hunters only realised they’d been scammed as they prepared to move in.

And while they were left desperately trying to find emergency accommodation, Farley used their cash to book a week-long holiday to Salou in Spain.

Police arrested Farley on October 30, 2015 and she admitted her crimes but fled the UK to Turkey where she has family before she was sentenced.

Extradition proceedings were started but she returned to the UK on her own accord and handed herself into police when she landed at Birmingham Airport.

Detective Constable Richard Potts, of West Midlands Police Economic Crime Unit, said: ‘This was a fairly basic scam in that she was taking money for products she simply didn’t own – but she created a wealth of bogus online profiles to give the impression she was a genuine online seller.

‘She harvested personal information from a woman who suffered a burglary several years ago in which her passport was stolen.

‘Farley came into possession of that passport and effectively stole her identity.

‘Farley callously persuaded family members and friends to take payments for her into their own bank accounts so they were unwittingly helping her launder crime proceeds.

‘And she was still claiming state benefits like child support on top of the thousands she was cunning out of victims.’

Potts revealed that all of the house hunters handed over big deposits without seeing the properties they were interested in renting.

He added: ‘It’s really important before parting with large sums of money that people do their due diligence.

‘Some victims gave Farley £1,000 on the back of photos posted online and a ‘pleasant’ phone conversation.

‘Fraudsters are good at what they do; one of Farley’s tricks was to tell customers there was another tenant waiting to move in and the only way to secure the agreement was to make full payment immediately into a specified bank account.

‘It sounds obvious but never pay money to a person you’ve not met and whose identity is not verified.

‘Use trusted websites and their suggested payment methods. Go and visit the premise you are interested in and get to know the estate agents.’