A convicted killer who used a narwhal tusk to help bring down Fishmongers’ Hall terrorist Usman Khan during his London Bridge rampage has been directed for early release from prison.

Steven Gallant, who was jailed for life with a minimum term of 17 years in 2005 for the murder of a firefighter in Hull, was one of three men who restrained Khan until armed police arrived at the scene and shot the 28-year-old jihadist dead in November 2019.

Khan, who had two large knives and a fake suicide belt, fatally stabbed Cambridge graduates Jack Merritt, 25, and Saskia Jones, 23, and injured three other people before running on to London Bridge.

Giving evidence at the inquest in April this year into the victims’ deaths, Mr Gallant said he ‘whacked’ Khan with a narwhal tusk but was empty-handed by the time of the battle on the bridge.

A spokesperson for the Parole Board said: ‘We can confirm that a panel of the Parole Board has directed the release of Steven Gallant following an oral hearing. Parole Board decisions are solely focused on what risk a prisoner could represent to the public if released and whether that risk is manageable in the community. 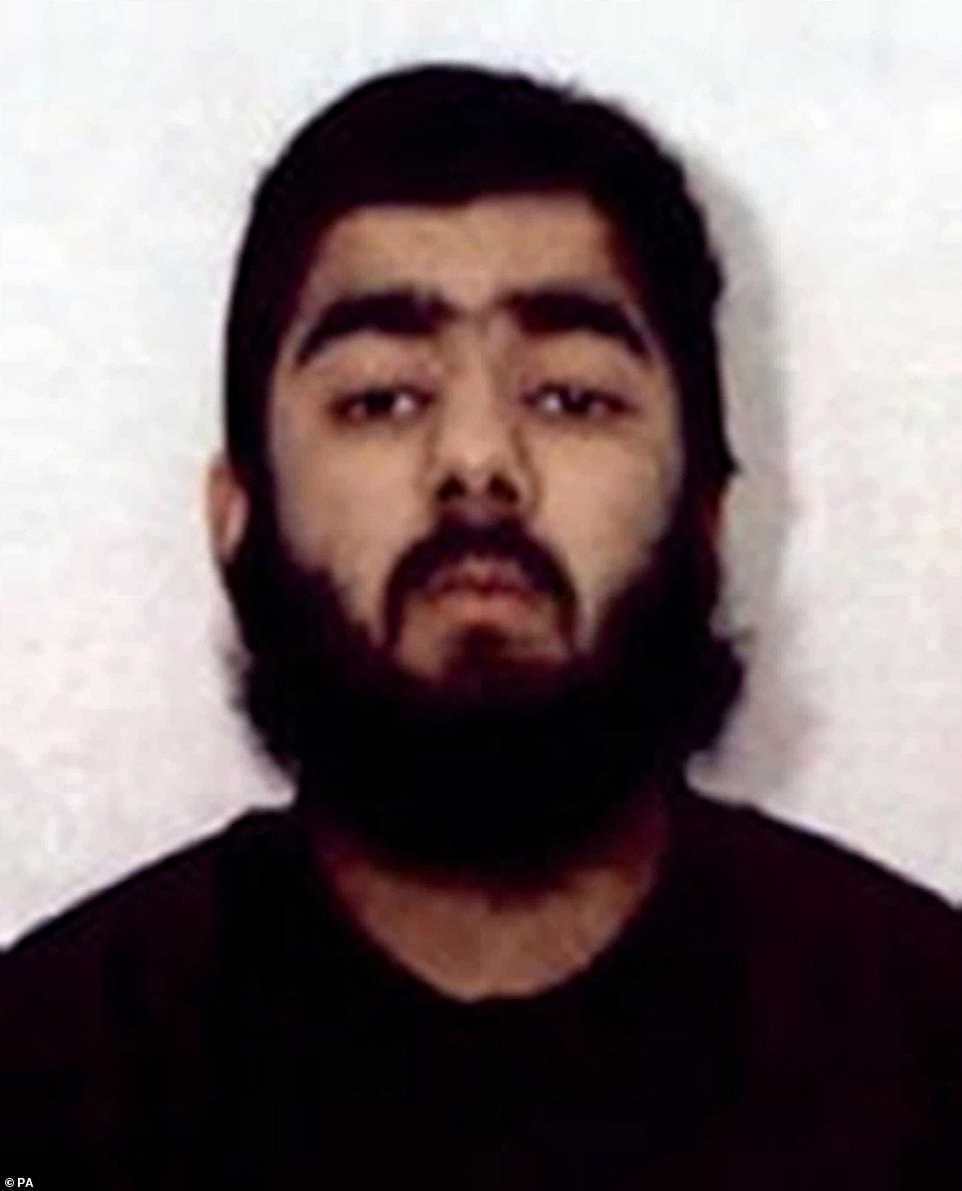 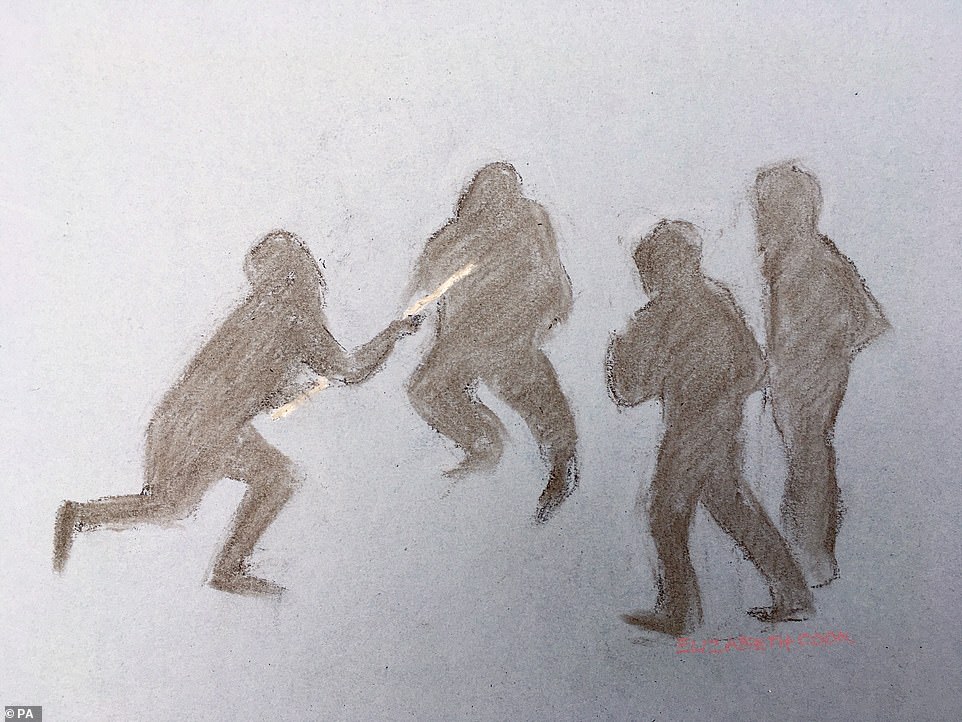 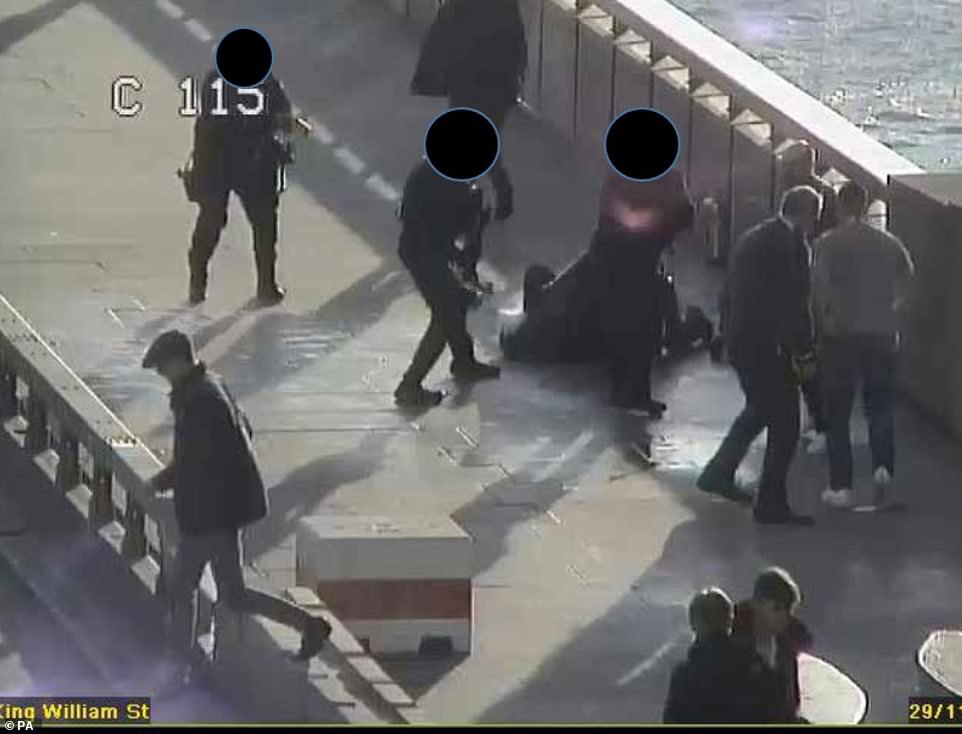 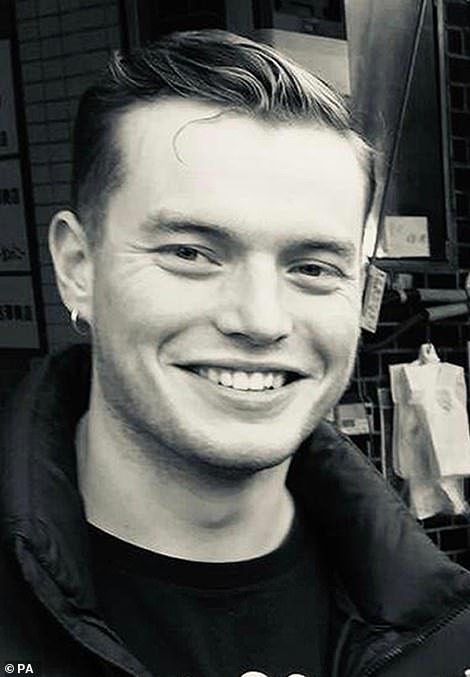 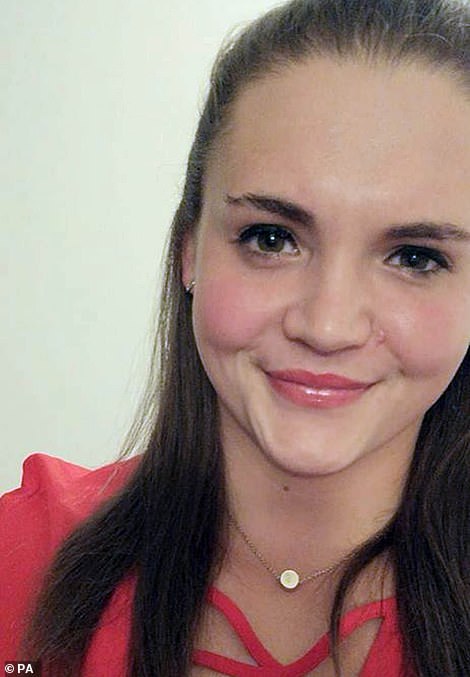 ‘A panel will carefully examine a huge range of evidence, including details of the original crime, and any evidence of behaviour change, as well as explore the harm done and impact the crime has had on the victims.’

The decision on release is provisional for 21 days subject to any appeal by the Justice Secretary.

Mr Gallant had been on day release at the event for reformed prisoners in Fishmongers’ Hall when he helped end Khan’s rampage. His actions on the day later saw his sentence cut following an intervention by the Queen.

The Ministry of Justice revealed in October that the monarch had employed the little-used ‘Royal Prerogative of Mercy’ to bring Mr Gallant’s case before the Parole Board 10 months early.

It was considered at a remote oral hearing on June 21, during which Mr Gallant gave evidence. 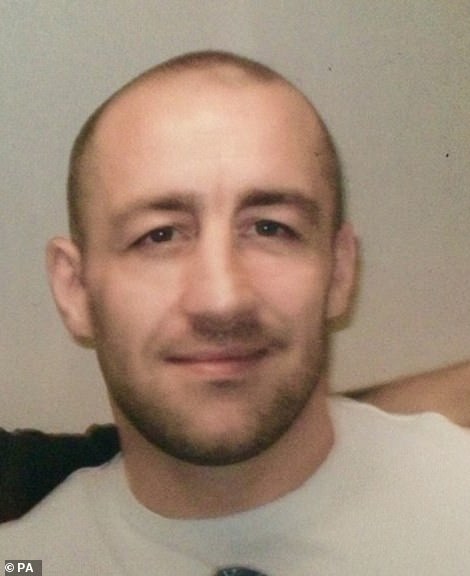 In a summary of the Parole Board’s decision, it said the panel had recognised his conduct during the Fishmongers’ Hall incident but ‘was clear that it was not a reason to direct his release’.

The board said professional witnesses had recommended Mr Gallant be released on licence, telling the panel he had ‘worked hard to understand and address his risk factors and to bring about a change to his life’.

Of its decision, the board said: ‘After considering the circumstances of his index offending, his pattern of previous offending, the progress made while in custody, the details of the release plan and all the evidence presented at the hearing, the panel was satisfied that Mr Gallant was suitable for release.’

Conditions of his release on licence would include a curfew, staying at a designated address and to comply with an exclusion zone to avoid contact with his victim’s family.

During the inquest for Mr Merritt and Ms Jones, Mr Gallant recalled a crowd of bystanders gathering and somebody suggesting to ‘give him (Khan) a kicking’.

He told jurors: ‘I said no, we had control of him at that time. It would make it more difficult.’

Mr Gallant said Khan managed to get up, so he gave the suspect ‘a couple of uppercuts to the face’, which he said helped to ‘stun him a little bit’.

Ms Jones and Mr Merritt were stabbed to death by convicted terrorist Khan at an alumni event put on by Learning Together on November 29, 2019.  The extremist, who wore a fake bomb vest, was tackled by delegates armed with a narwhal tusk and a fire extinguisher, and driven out onto nearby London Bridge where he was shot dead by police. 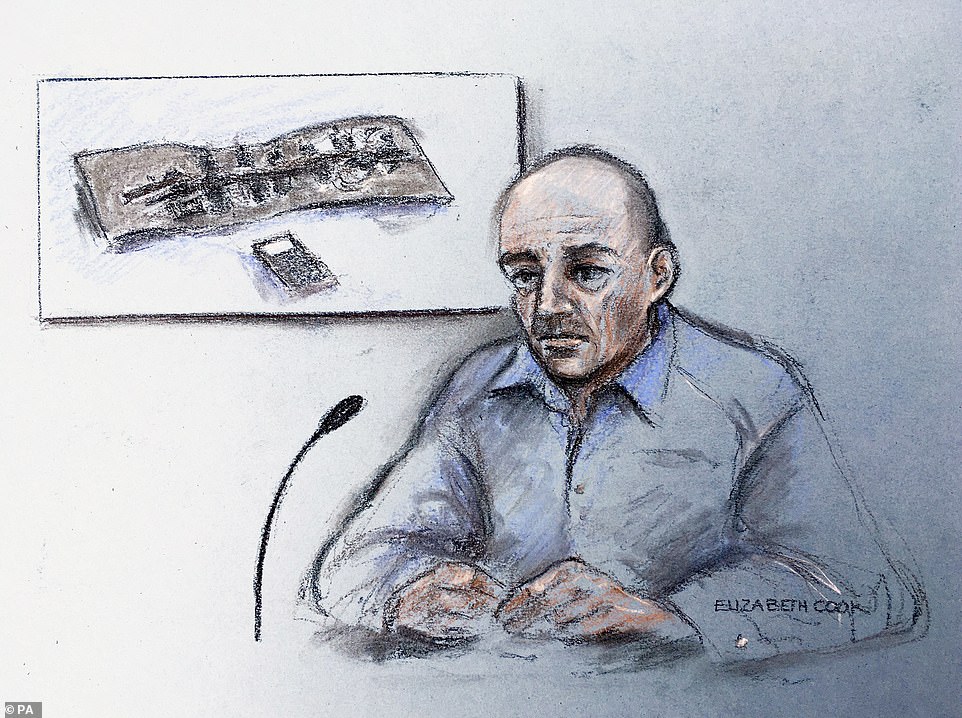 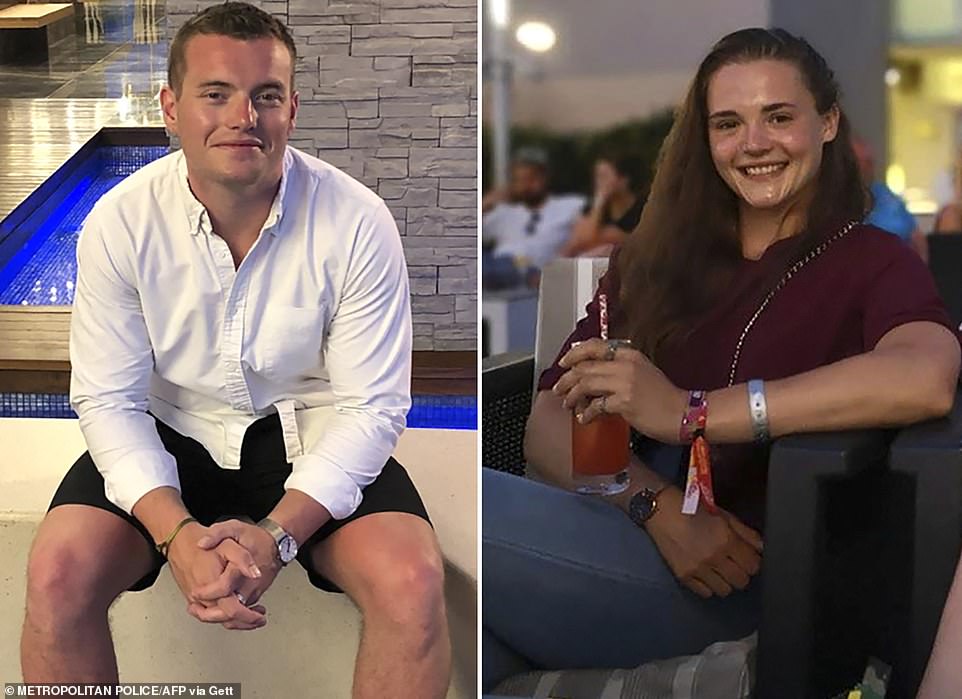 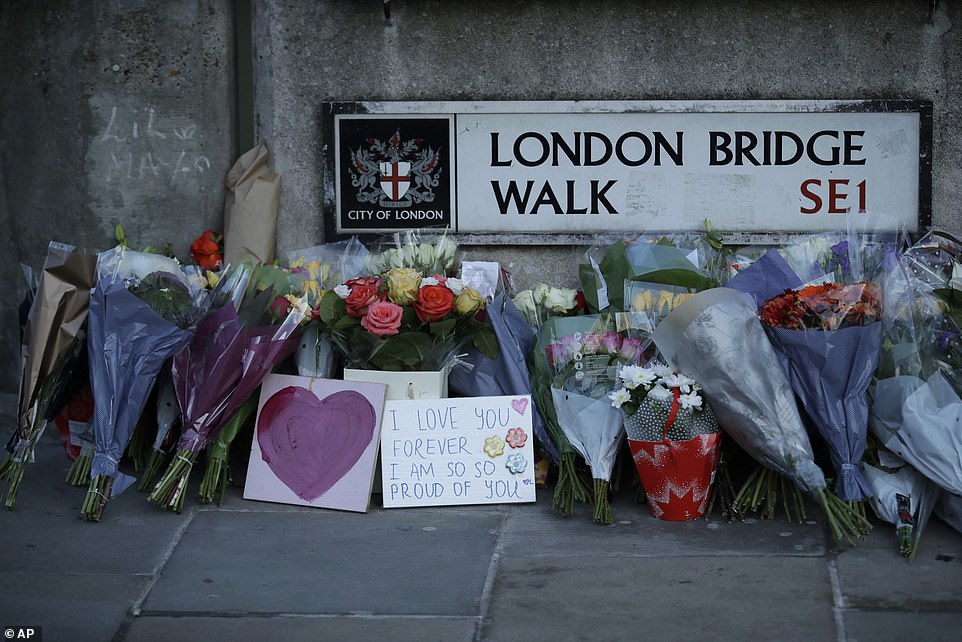 The Fishmongers’ Hall terrorist fled to London Bridge, where he was shot at 20 times by police 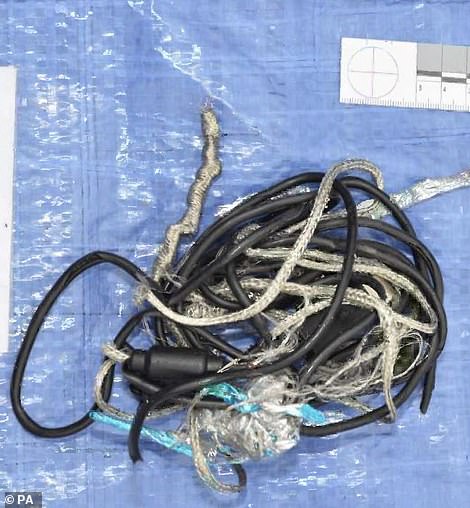 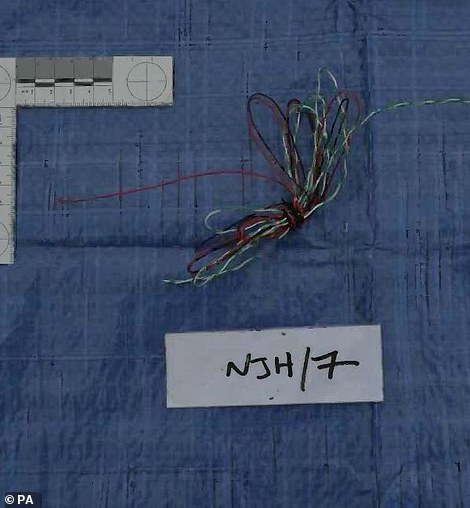 Wiring detectives believe was part of the fake suicide vest

An inquest at the Guildhall in the City of London heard he had been released from prison 11 months earlier under strict licence conditions and was under investigation by counter-terrorism police and MI5.

But the ‘manipulative and duplicitous’ terrorist hid his murderous intent from those tasked with keeping the public safe, the hearing was told. The combination of his lies and communication break-downs between authorities meant he was able to travel free to London to wage his bloodthirsty attack.

The jury found the victims had been ‘unlawfully killed’ and confirmed basic facts surrounding their deaths. It concluded that failings in Khan’s management in the community and information-sharing and guidance by agencies responsible for monitoring or investigating Khan contributed to the deaths.

Jurors also found that omissions or deficiencies in the organisation of the event at Fishmongers’ Hall and its security contributed to the deaths.

Khan was arrested in December 2010 and sentenced to 16 years in jail after he eventually admitted planning to set up a terrorist training camp in Pakistan and plotting to bomb the London Stock Exchange.

Though he was regarded as one of the most high-risk inmates across the prison estate, Khan’s sentence was varied on appeal – meaning he no longer needed the approval of the Parole Board before his release.

The jihadist, from Staffordshire, was released on Christmas Eve 2018, to complete the rest of his sentence on licence in the community.  Less than a year later, he launched his attack at London Bridge.