Nitpicking can kill: Constantly criticising your partner and pointing out their faults could send them to an early grave, study finds

By Sophie Freeman for the Daily Mail

It’s not always easy to bite your tongue in a long-term relationship. But pointing out your other half’s faults could send them to an early grave, a study suggests.

It found older people who reported higher levels of criticism in their partnerships were significantly more likely to die within the following five years.

The effect was the same for men and women alike, and independent of factors such as whether a person had other close family or friends. Lead author Professor Jamila Bookwala said frequent criticism can put damaging stress on the body.

‘It can be a type of chronic interpersonal stressor, and, just like other chronic stressors, can have a cumulative and enduring negative impact on not only health and well-being – morbidity – but also mortality,’ she said.

Professor Bookwala’s team from Lafayette College in Pennsylvania analysed data from 1,734 men and women who had been interviewed for the National Social Life, Health and Ageing Project.

All were aged between 57 and 85, with an average age of 68, and 90 per cent were married. The rest were living together or in an otherwise intimate relationship.

They were asked about their relationships, including how often they felt their partner criticised them. Answers were given on a three-point sliding scale – with one meaning ‘hardly ever or never’, two meaning ‘some of the time’, and three meaning ‘often’. With every unit increase in the response scale, the risk of the person being dead when researchers followed up increased significantly. 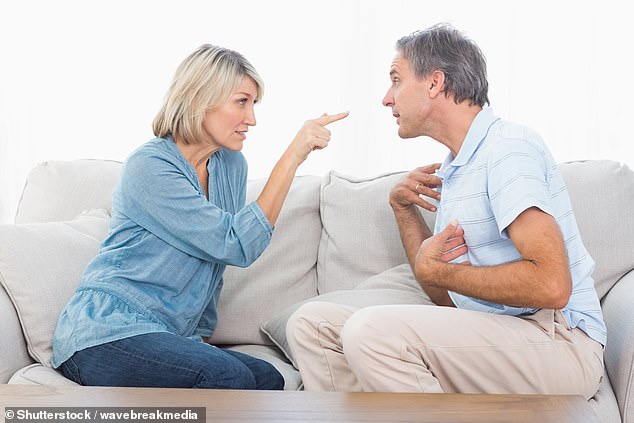 The results were analysed in a way that removed other factors that could account for the results, such as participants’ weight, age, use of medication, education level and the size of their family and friendship networks.

The study also analysed the positive aspects of participants’ relationships – feeling they could open up to their partner and rely on them – but these had no effect on the results.

Professor Bookwala, whose research is published in the scientific journal Health Psychology, concluded: ‘Put simply: stop criticising your partner – it can negatively impact their health and how long they’ll live.’