Conservative MP Dehenna Davison says the pain of losing her father to a single punch when she was just 13 was harder to take because his killer was never sentenced.

Speaking to the Times, the Bishop Auckland MP said the fact the man who hit her father Dominic, who was just 35 when he was killed in a Sheffield pub in 2007, didn’t serve a prison sentence has spurred her on to fight for justice for other families in similar situations.

Her father’s aggressor stood trial for the 2007 crime but there was disputed evidence, with witness testimonies split, meaning he wasn’t convicted.

‘Knowing my dad as I did, knowing that he wasn’t a violent man, it was hard to come to terms with,’ says Davison, who launched the All Party Parliamentary Group for One-Punch Assaults in February this year. 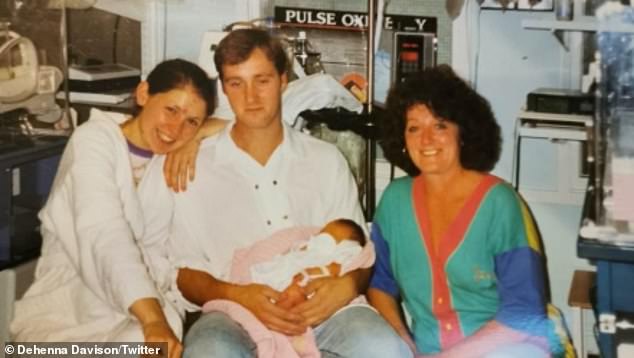 Ms Davison posted a picture of her father on Twitter after the 2019 election, dedicating the victory in Bishop Auckland to her family. Her father’s killer evaded jail after witnesses were split in their evidence over what happened 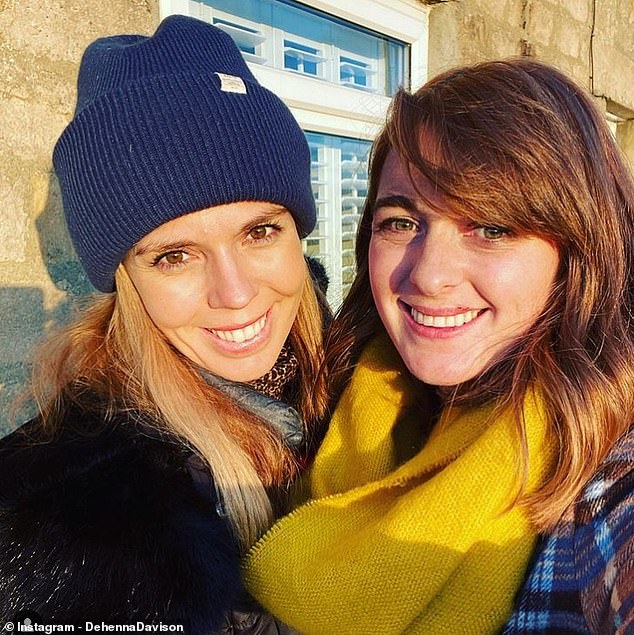 #ToryGirlSquad: Carrie Symonds has been ‘incredible and offered loads of support and advice’ says Davison, and the pair have bonded over their love of dogs, even taking their respective rescue dogs Dilyn and Carter on the Tory campaign trail in 2019

Now 27, Davison is very much a rising star of the Conservative party and counts the Prime Minister’s partner Carrie Symonds as one of her close friends – the pair both own rescue dogs.

A photo posted on social media by Davison in 2019 saw the pals campaigning with Symonds’ Jack Russell cross Dilyn and Davison’s terrier cross Carter. At the time, Davison posted the snap to her followers with the caption #ToryGirlSquad.

Of her friendship with Ms Symonds, who’s recently found herself at the centre of the Downing Street renovation scandal, Davison told the newspaper Boris Johnson’s girlfriend had been ‘incredible and offered loads of support and advice’ when she became one of the youngest MPs in the Commons after being elected in 2019 aged 26.

After the election, their pets even enjoyed a doggy playdate at the home Symonds now shares with the PM and their son Wilfred. Davison described the meet, saying it ‘wasn’t pretty’ but no damage was done to the flat’s interior furnishings. 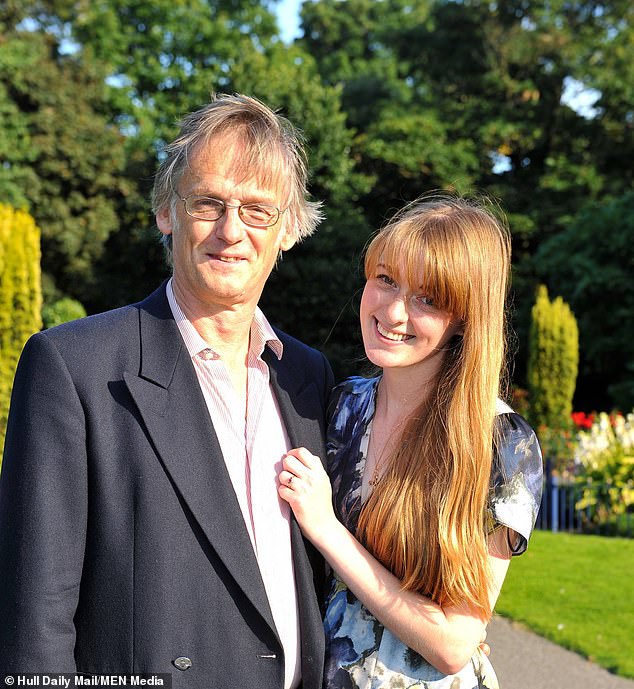 Divorcing: After marrying Hull Tory councillor John Fareham, 35 years her senior, in her early twenties, the couple are now getting divorced. The pair appeared on Channel 4 show Bride and Prejudice during their relationship to talk about taboos surrounding age gap marriages

Davison also revealed that she’s currently divorcing Hull Tory councillor John Fareham, the husband 35 years her senior with whom she appeared on Channel 4 show Bride and Prejudice with. Davison says appearing on the television programme about taboo relationships including large age gaps had proved ‘a learning curve’.

In February, Davison spoke out on the issue of single-punch assaults on the 14th anniversary of the death of her father.

In a video announcing the launch of the All Party Parliamentary Group for One-Punch Assaults she said: ‘To me this is very personal and feels like something I have wanted and needed to do for a really long time.

‘Every time I have spoken to victims or the families of victims there is a sense of burning injustice and I really want to get to the bottom of that.

‘So the APPG will be launching an inquiry into one-punch assaults where we are going to invite in victims who have life-changing injuries, the families of victims who are no longer with us, perpetrators, judges, lawyers of both sides, investigating police officers and anyone else with a really relevant interest in this.

‘Just to get to the bottom of what is really going on and to then pull together a report with a series of proposals that we can take to the ministry of justice regarding sentencing and victim support, which hopefully means we can drive forward some really positive change.’

Speaking in the House of Commons in January 2020, Ms Davison describing how her father was attacked by a man drunk and on drugs.

She described the pain of learning her father’s killer was to be released after serving 18 months of his sentence and the ‘anger’ and ‘frustration’ which was felt by her nan after she saw the man for the first time after his release. 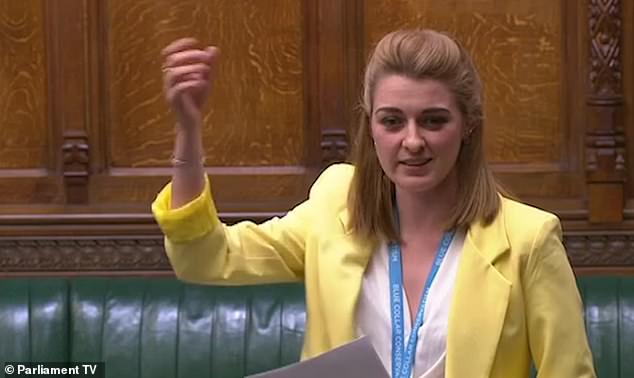 Who is Dehenna Davison, the 27-year-old who turned Bishop Auckland blue for the first time in history? 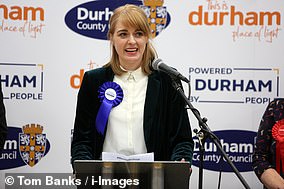 Dehenna Davison was just a young teenager when she learned her father Dominic had been killed by a single blow to the head in the pub.

Ms Davison, a Tory winner last night in a Co Durham seat which has never elected a Conservative MP, recalled how she sat in a hospital waiting room as doctors battled for 45 minutes to save her father’s life.

‘I can still picture it. I can tell you what the colour the walls were and everything,’ she said. ‘They [the doctors] stopped and I went to see my dad’s body, which is not something you expect to do at such a young age.’ 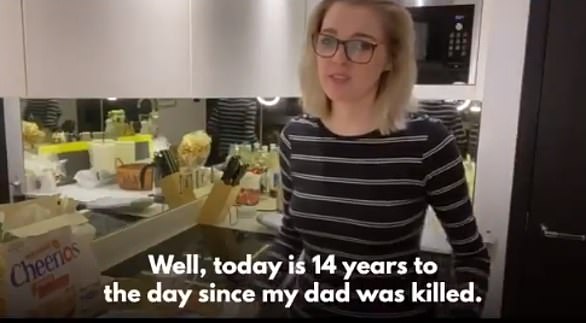 In a video announcing the launch she said: ‘To me this is very personal and feels like something I have wanted and needed to do for a really long time’

She studied politics at Hull University and spent a year as an aide to Jacob Rees-Mogg.

Ms Davison made the headlines when she appeared on Channel 4’s Bride & Prejudice alongside 59-year-old Tory councillor John Fareham in 2018, in a bid to convince her grandfather they were a good match.

She received support on the campaign trail from Mr Johnson’s girlfriend Carrie Symonds, said politics was about helping people ‘get their benefits claim through, getting a pothole filled’.

The former computer game shop worker admitted the ‘poster girl thing’ was probably due to her tragic backstory and her ‘slightly unusual demographics’. But she added: ‘I just want to get stuff done.’

Carrie Symonds tweeted her congratulations after her victory, saying she was thrilled to hear her friend had become the first Conservative MP for Bishop Auckland.  ‘She will be fantastic,’ she wrote.

Ms Davison’s father had been drinking with his cousin at a pub in Sheffield in 2007 when his attacker intervened in an argument the pair had been having.

The court heard that when the attacker punched Mr Davison in the face, he collapsed, causing a fatal brain injury. He was later jailed.

Writing in the Northern Echo today, she said the punch which killed her father hit him in exactly the wrong spot, causing an artery to burst, and he died almost instantly.

‘Alongside trying to process the grief and shock of losing dad so suddenly, there was also the pressure and uncertainty of the court case, which took 10 months to complete, and ultimately left us with a burning sense of injustice,’ she said.

She was surprised by how many other families have been similarly affected by one-punch attacks and said there was a shared feeling that sentencing was too lenient.

Ms Davison said the group will also look at educating people about the true impact of violence.