Conor McGregor has revealed that his Lamborghini yacht has been completed as he shared a snap of the vast 63ft liner on Tuesday.

The 33-year-old UFC fighter took to Instagram to share a picture of his finished yacht as it was transported from the construction site.

Conor shelled out an eye-watering €3million on the Lamborghini yacht back in October, with the sportsman proudly revealing he was the proud owner of just one of the 63 boats that were being made.

It’s ready! Conor McGregor reveals his £2.6 million Lamborghini yacht has been completed as he shared an Instagram snap of the vast liner on Tuesday (pictured)

His brand new vessel, which is priced at around £2.6 million, looked enormous as it was carefully manoeuvred by a team of workers, on top of a large orange trailer.

Penning a simple caption for the image of his new yacht, McGregor wrote: ‘My Lamborghini yacht is ready.’

McGregor initially announced his purchase of the Lamborghini Tecnomar 63 – the Italian car manufacturer’s first entry into the Sport Yacht World – back in October last year. 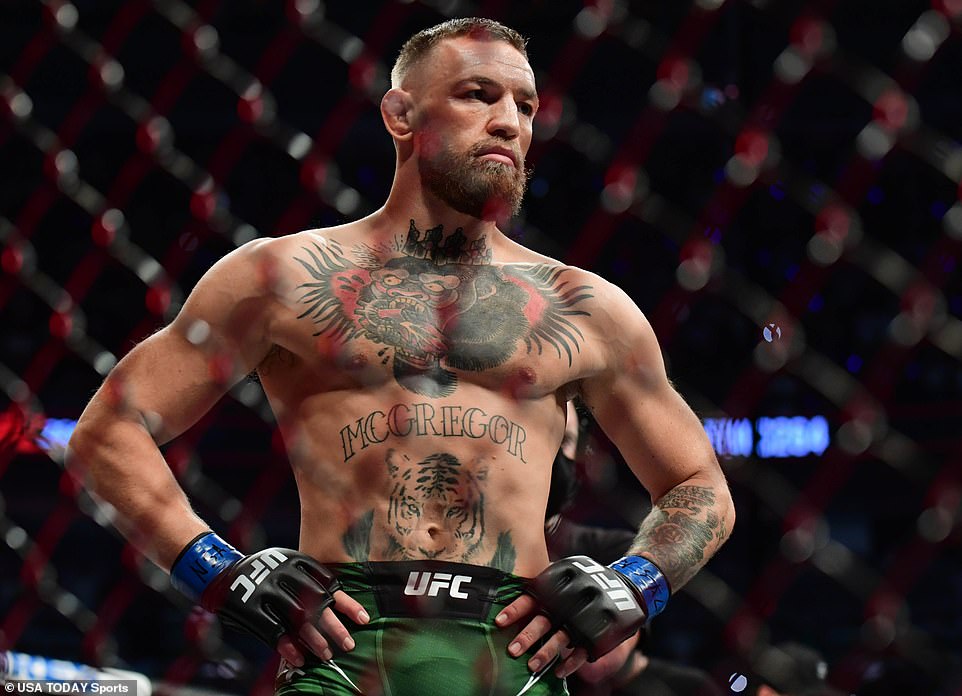 Lavish: The 33-year-old UFC fighter (pictured) took to Instagram on Tuesday to share a picture of his finished yacht, the first such made by the car manufacturer 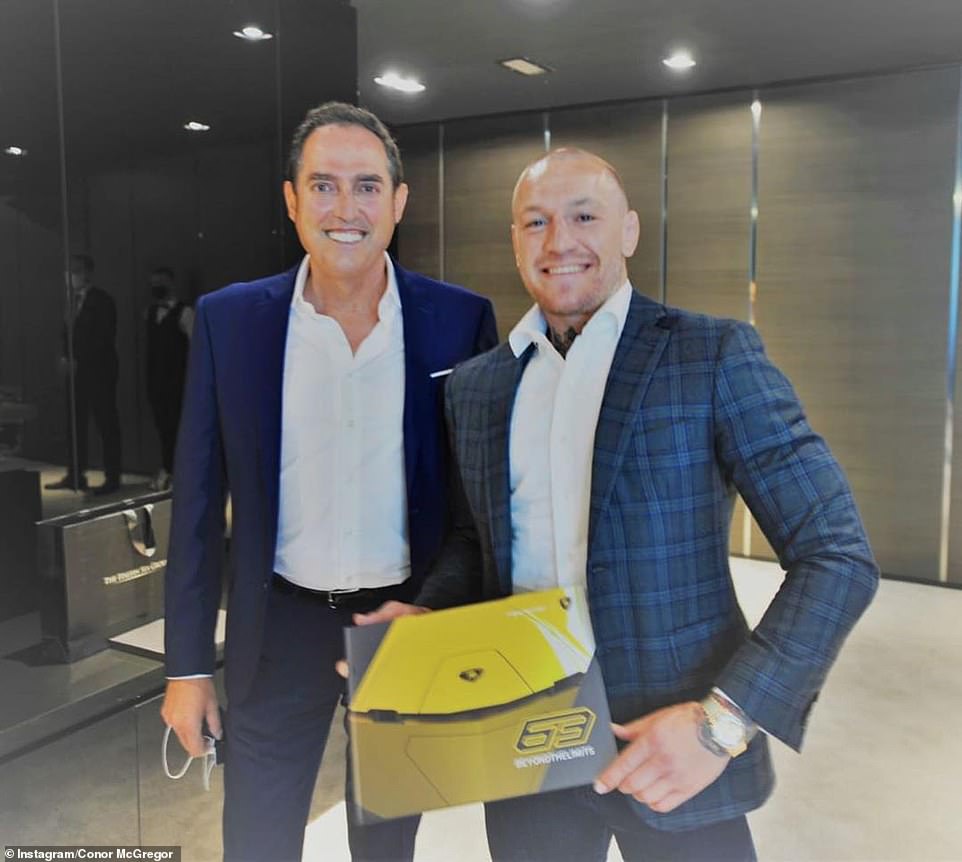 Wow: Conor splashed out €3million (£2.6 million) on the Lamborghini yacht dubbed the ‘supercar of the sea’ in October (pictured customising his boat at the Italian Sea Group HQ) 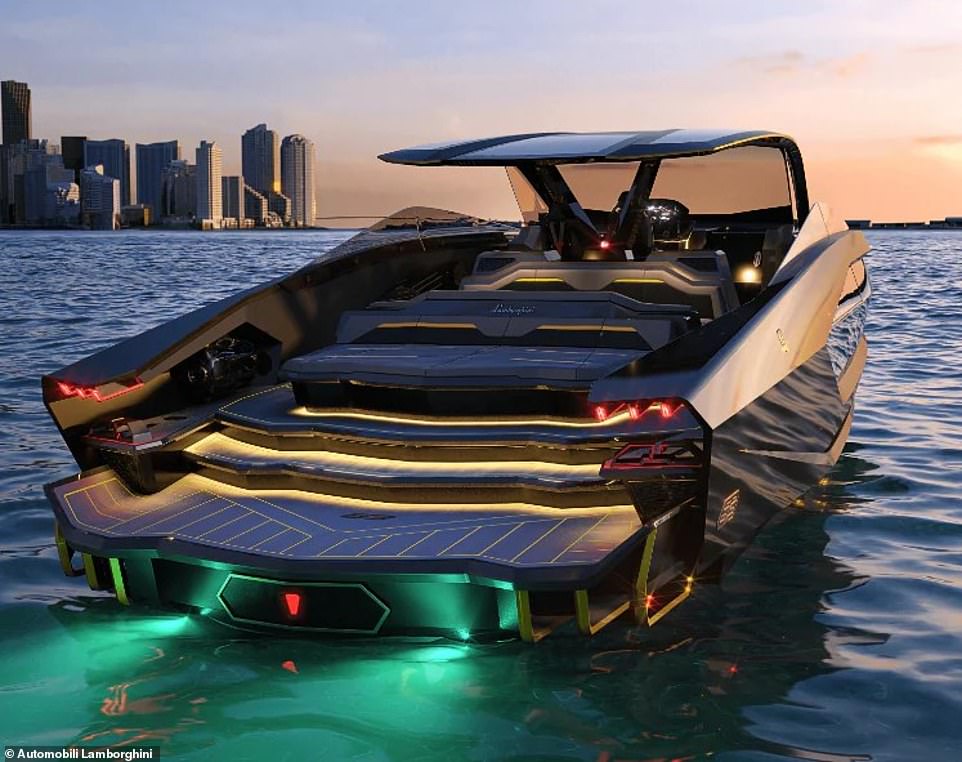 There it is: The price is a mere drop in the ocean for the sportsman, who has an estimated net worth of €101 million, and the lavish boat can reach a top speed of 69mph (60 knots) and boasts 4,000 horsepower

The Tecnomar 63 has been designed and built by the Italian Sea Group and Tecnomar for Lamborghini – with Conor buying number 12 of the sole 63 yachts that will be made.

The price is a mere drop in the ocean for the sportsman, who has an estimated net worth of €101million.

Inspired by the car, the yacht has an angular and futuristic design with Y-shaped headlamps and the iconic Lamborghini logo.

There is also a dashboard based on Lamborghini’s mid-engine hybrid sports car, the Sián FKP 37. 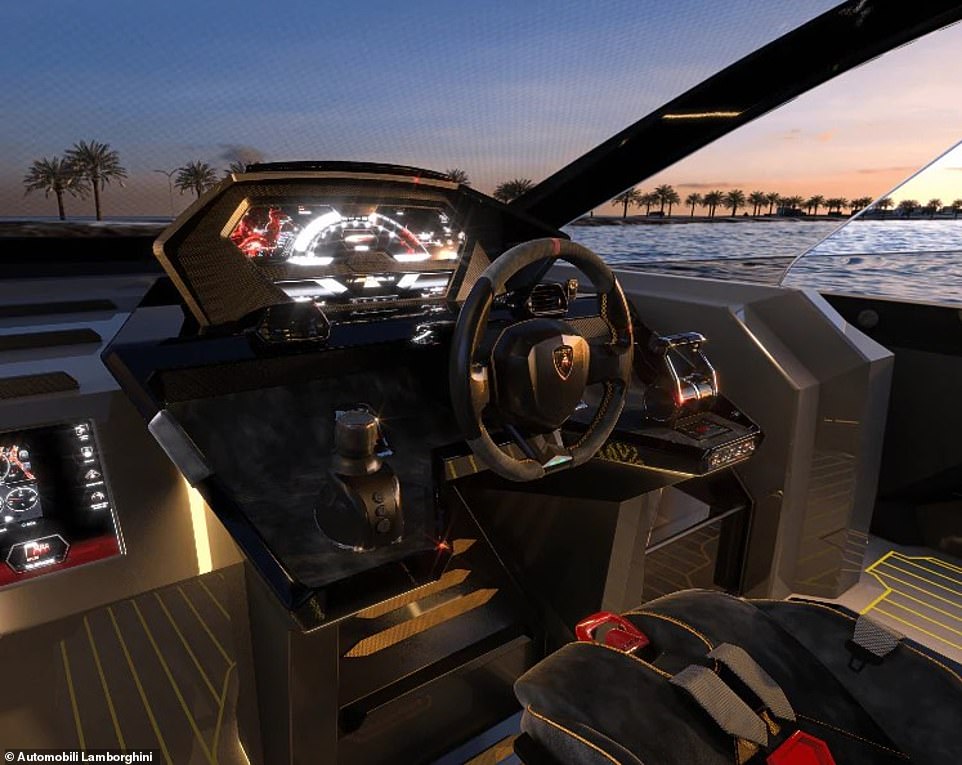 Breathtaking: Inspired by the iconic car, the yacht has a angular and futuristic design with Y-shaped headlamps and the iconic Lamborghini logo 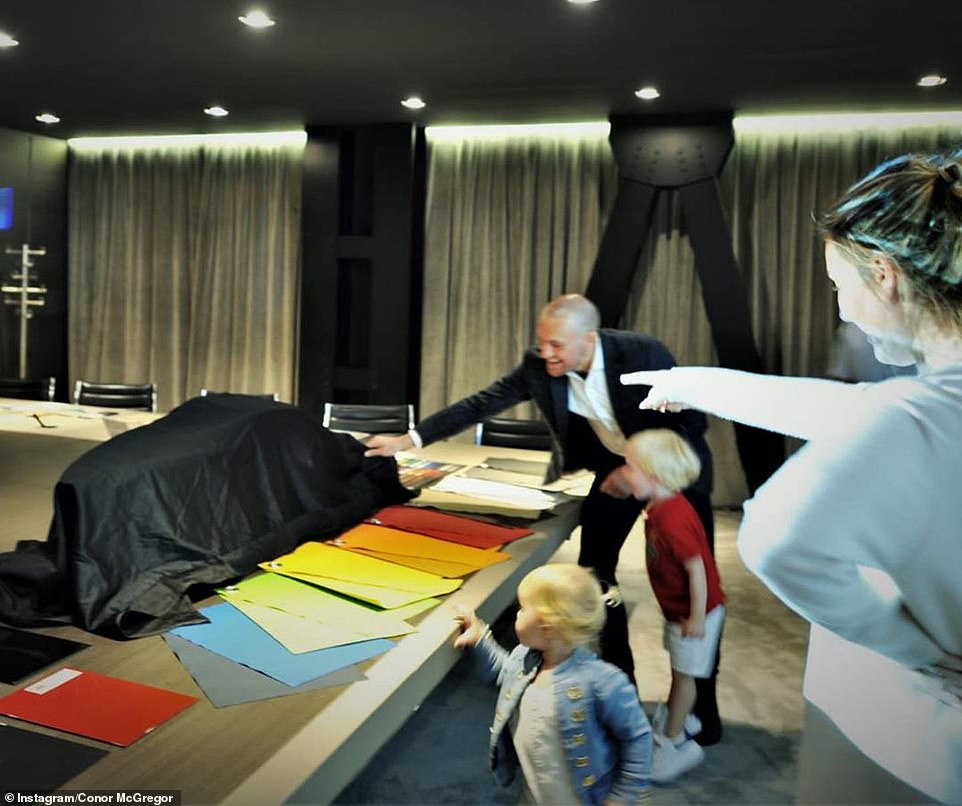 Yay: In October Conor was seen picking out swatches for his new boat alongside fiancée Dee Devlin and their children Conor Jr, three and Croia, two after purchasing the liner in Italy, the 12th of just 63 that were being made

The yacht’s exterior is inspired by the Lamborghini Miura and Countach from the 1960s and 1970s.

The star was seen looking delighted as he picked out swatches for his new toy in Italy alongside fiancée Dee Devlin and their children Conor Jr, three and Croia, 21 months.

Conor looked dapper in a navy tweed suit as he proudly posed up at the Italian Sea Group’s headquarters.

He captioned the snaps: ‘The No.12 “McGregor edition” @tecnomaryachts @lamborghini 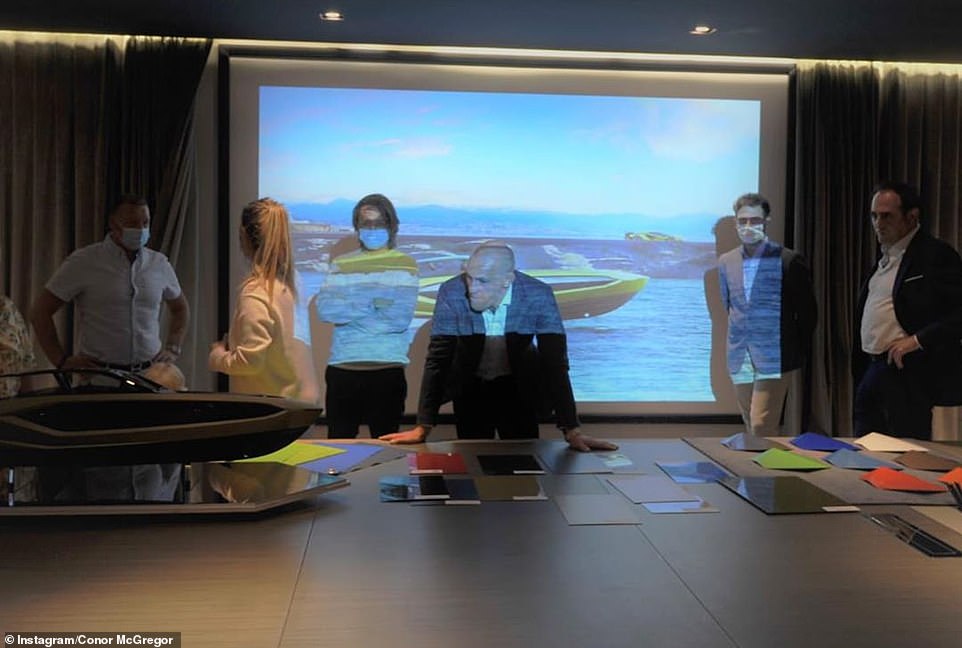 Eyes on the prize: In an Instagram post he said: ‘Titled the ”Supercar of the Sea”. I am honoured to secure the Number 12 edition of just 63 to be made. 1963 being the year Lamborghini first began, and 12 being, well you know Twelve!’

‘Titled the ”Supercar of the Sea”. I am honoured to secure the Number 12 edition of just 63 to be made. 1963 being the year Lamborghini first began, and 12 being, well you know Twelve!

‘Thank you Giuseppe Constantino and the entire team at “The Italian Sea Group” for your amazing work! Excited to see the finished result during next seasons yachting season ❤️ #TecnomarForLamborghini63 #BeyondTheLimits #Proper.’ 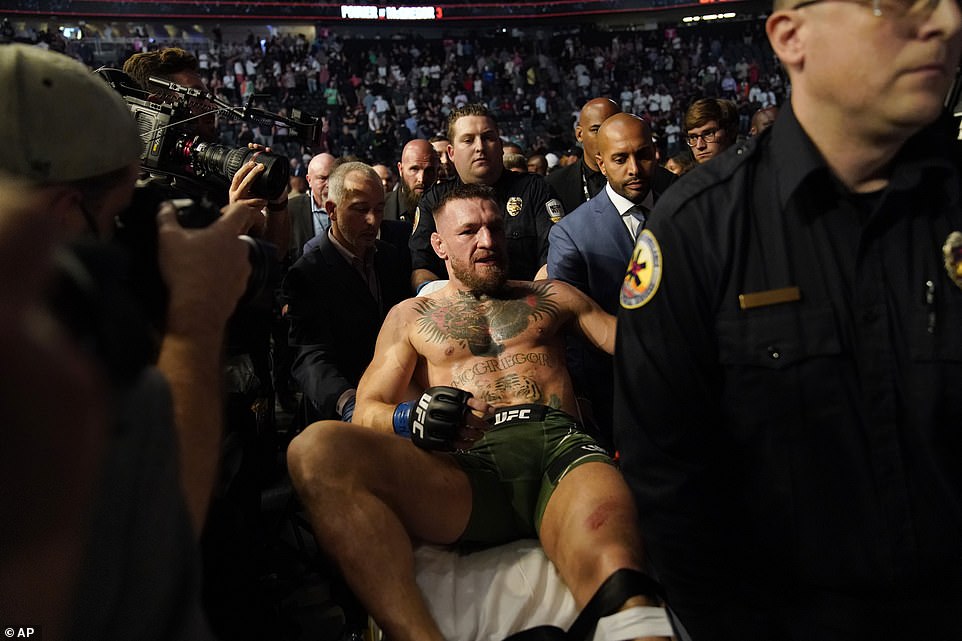 Ouch: Earlier this week, McGregor was seen for the first time since his devastating injury as he was released from hospital, after fracturing his tibia in the closing seconds of the opening round against Dustin Poirier (pictured during the fight)

Earlier this week, McGregor was seen for the first time since his devastating injury as he was released from hospital in time to celebrate his 33rd birthday.

The fighter fractured his tibia in the closing seconds of the opening round against Dustin Poirier at UFC 264 in Las Vegas last weekend.

Conor now faces a long road to recovery, with UFC president Dana White convinced that the former two-weight champion will be unable to compete for 12 months.

‘I think they just released him right now from the hospital about 10, 15 minutes ago,’ Dana told TMZ Sports.

‘He’ll be in [Los Angeles] for a little while. I don’t know if he’s gonna fly home, or what he’s gonna do. 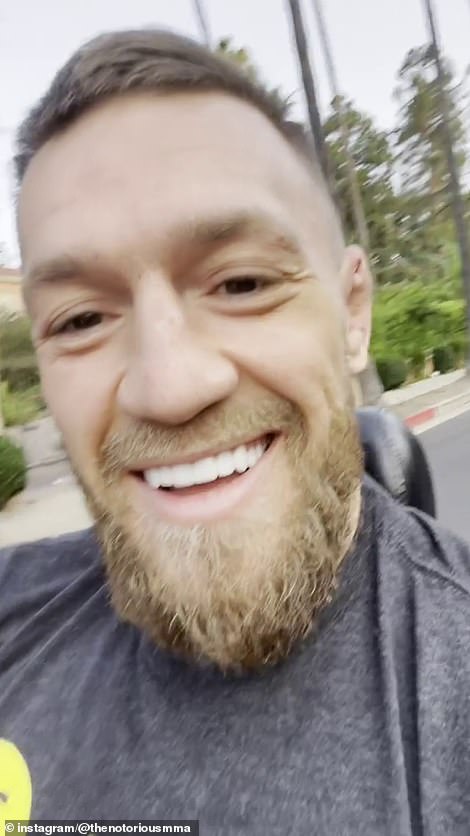 Keeping his spirits up: Conor was in good spirits as he updated his fans following his release from hospital, confirming he was finally on the mend after the horrific injury

Asked when the sportsman would be back in fighting shape, Dana said: ‘He’ll be back in a year.’

McGregor took to social media after surgery and said: ‘Just out of the surgery room, everything went to plan, everything went perfect and I’m feeling tremendous. We’ve got six weeks on a crutch now and then we begin to build back.

‘A clean break of the tibia and it was not to be. Dustin, you can celebrate that illegitimate win all you want but you’ve done nothing in there. That second round would have shown all,’ he added.

Conor broke his leg while throwing a kick that landed on Poirier’s elbow late in the first round.

His coach John Kavanagh revealed that the athlete had suffered an ankle problem in training camp that could have been a contributing factor.

He said: ‘There might have been something in there. It seems unusual that a young, healthy, fit man can wrap his foot around an elbow without there being something there before.

‘But you can play those sorts of guessing games all day long,’ he concluded.