‘How is it possible to be THAT bad at something so simple?’: Fans and rivals mock Conor McGregor for a WILD ceremonial first pitch at Chicago Cubs game

Conor McGregor’s mantra is ‘precision beats power’, but he was unable to take heed of that advice after throwing out a ‘terrible’ first pitch before Chicago Cubs took on the Minnesota Twins at Chicago’s Wrigley Field.

McGregor, 33, is touring the States following his loss to Dustin Poirier in July. The Irishman – who suffered a horrendous leg break during the UFC 264 contest – has been seen in California, New York and now Chicago on a single crutch.

True to form, McGregor arrived at Wrigley Field in a dapper suit and was invited to the mound to throw the first pitch ahead of the MLB game on Tuesday night.

However, the Notorious failed to direct the ball over the plate, sending it wayward to the right, far away from its intended target.

MMA stars have not fared too well when tossing the first pitch, with heavyweight star Derrick Lewis also failing to impress at a Houston Astros game, and McGregor’s lightweight rival, Justin Gaethje, poked fun at the Irishman.

‘I cannot stop laughing at this,’ Gaethje posted on Twitter. ‘Every MMA fighter that has represented us doing this has looked terrible but this takes the cake.’

Meanwhile, baseball fans took to Twitter to mock the Notorious’ lousy attempt, with one user writing: ‘How is it possible to be that bad at something so simple?’

Yet McGregor insisted he was ‘happy’ with his delivery, reflecting that while the ball failed to hit the target, there was plenty of ‘venom’ on the pitch. 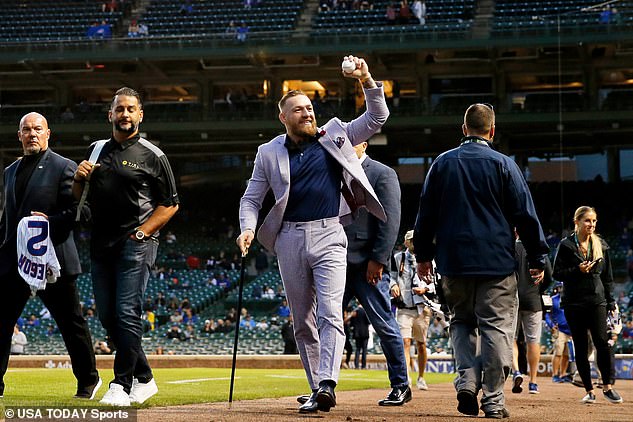 McGregor, who is still healing up from a leg injury, was invited to the mound at Wrigley Field 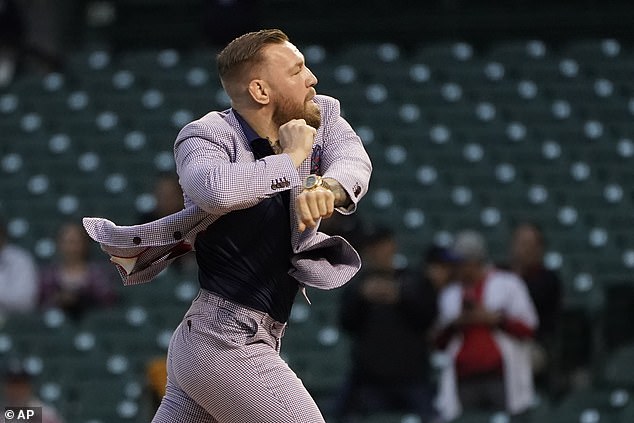 However, the Irishman’s delivery was way off target and sailed over to the right of the plate

‘The most devastating first pitch ever seen in the iconic Wrigley Field,’ he said via The Mac Life.

‘The venom is there, the power is there, it’s a little off accuracy-wise but I’m on the one leg, you can see my base fully on the left leg that was just recently injured.

‘I’m happy with that, I will take that on board. If you could measure the power, I don’t think there was much difference between mine and them [the baseball players] out there, just the accuracy was a little off.

‘I’m happy with it, if that was on target I think we’d have had a problem.’ 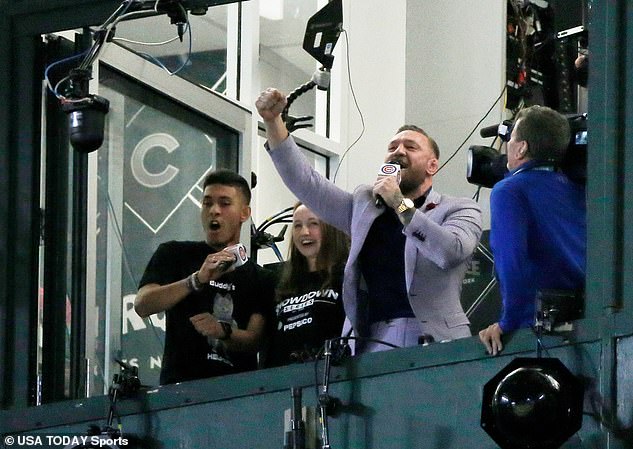 McGregor continues to recover from his devastating leg break sustained at the end of the first round against Poirier this summer.

The 33-year-old was expected to be sidelined for at least 12 months with the injury, although UFC chief Dana White has hinted McGregor could be back before the end of the year.

‘Conor seems to be healing up pretty well,’ he told the Australian Daily Telegraph. ‘The question is: When can he start kicking again?

‘If he could take kicks, then he’d be looking at a fight before the end of the year again, so it all depends on how fast that leg heals.’