EXPRESS INFORMER > News & Politics > Confessions of a hairdresser: This is why you should NEVER pluck grey hairs from your head

A world-renowned hairdresser has pointed out the dangers of plucking your grey hairs when they appear because you’re in danger of creating a bald spot.

Grey hairs are caused by the follicle failing to produce melanin, and therefore colour – a process that is most often caused by the natural ageing process and sometimes stress.

‘Plucking can traumatise the hair follicle, and you can damage it to the point where it will no longer grow any hair,’ Trey Gillen, hairstylist and creative director of education at Sachajuan, told Yahoo.

‘If you’re a serial plucker, repeated ‘plucking trauma’ can even cause infection, scar formation, and bald patches.’

Grey hairs are caused by the follicle failing to produce melanin, and therefore colour – a process that is most often caused by the natural ageing process and sometimes stress (stock image)

In 2020 scientists finally proved what conventional wisdom has been telling us for decades – that being stressed causes hair to go grey.

However, in a stunning revelation, researchers from Columbia University also found the process can be reversed in hairs that have only recently turned grey.

Reducing stress could stave off grey hair, scientists say, and it is hoped drugs could be developed to further prevent the unwanted process.

The study found hairs from all over the scalp can reverse greying. It also discovered that beard and pubic hairs can regain their colour after starting to go grey.

Scientists believe the root of the greying issue comes from changes to metabolic pathways which form proteins the body. 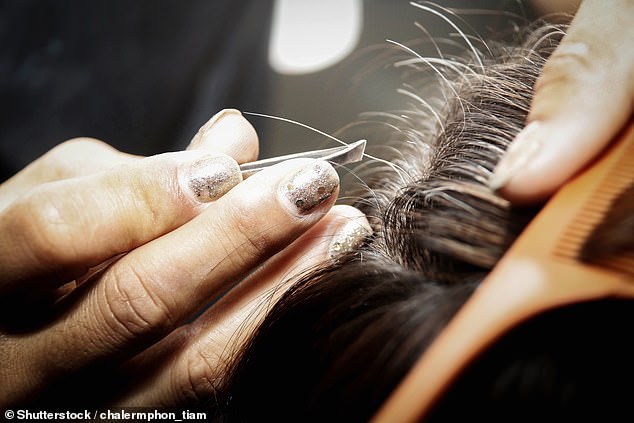 However, in a stunning revelation, researchers from Columbia University also found the process can be reversed in hairs that have only recently turned grey (stock image)

These pathways are heavily influenced by hormones produced when a person is stressed, and relieving stress can therefore undo the process.

An extensive piece of research published online as a pre-print and currently undergoing peer-review for publication in a journal has detailed how hairs go grey.

Scientists plucked hairs from the head of willing volunteers and created a new imaging technique that detects pigment throughout a hair, from base to tip.

Their new method of analysis is similar to the study of tree rings, where a section is linked to a specific period of time, the researchers say.

For trees, a year correlates to another growth ring. In hair, a centimetre grows every month.

‘Using this methodology, similar to dendrochronology where tree rings represent elapsed years, hair length reflects time and the hair shaft is viewed as a physical time scale whose region proximal to the scalp has been most recently produced by the hair follicle, and where the hair tip represents weeks to months in the past, depending on the hair shaft length,’ the researchers write in their study.

Researchers were assessing the amount of melanin — which gives hair its colour — and what proteins were present in different parts of a hair.

They expected to see hairs greying at the base, as hairs grow from the scalp, not from the tip.

However, when they took almost 400 hairs from 14 people, they found the opposite. Some hairs were grey at the tip, but were coloured at the base. 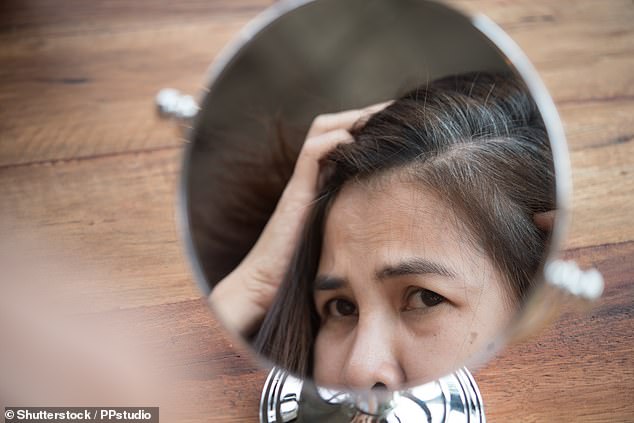 Scientists plucked hairs from the head of willing volunteers and created a new imaging technique that can detect the level of pigment in different parts of the hair, from the follicle and the base to the very tip. They analysed the hairs and found hairs could reverse greying and when a person is stressed, a hair can start growing without colouration (stock image)

This, the researchers explain, means a hair has greyed and then, inexplicably, stopped greying and returned to its normal colour.

Using the known growth rate of hair, researchers were able to specifically trace back when in a person’s recent history the hair went grey.

They found grey periods matched up with increased levels of stress and the transition from grey to coloured occurred when stress was alleviated.

For example, one participant in the study went on holiday and this correlated with a switch from white hairs back to coloured hair.

The study cannot prove the removal of stress caused the reversal in greying, but the scientists believe it is the most likely explanation.

Writing in their study, they say: ‘Our data strongly support the notion that human ageing is not a linear and irreversible biological process and may, at least in part, be halted or even reversed.’

Writing in their study the team of academics the Picard Lab at Columbia University and in collaboration with Dr Ralf Paus say that the proteins found in the hairs directly implicate metabolic pathways as the culprit behind greying hair.

They say these pathways are ‘reversible in nature and sensitive to stress-related neuroendocrine factors’.

‘This result provides a plausible biological basis for the reversibility of greying and its association with psychological factors, and also supports the possibility that this process could be targeted pharmacologically,’ they add.

However, the researchers say that although it appears going grey can be brought on by stress, it most likely can only be reversed in hairs that have recently greyed.

Greying can only be reversed when undoing the impact of stress-related whitening.

Other factors which play a role in dictating when a person’s hair loses its colour, including genetics and smoking.

If these factors cause greying, removal of stress will not reverse this process.

Grey hair is caused by metabolic and mitochondrial alterations

In the 2020 study which found greying can be reversed, the Columbia University researchers found proteins held the key to going grey.

They created a way to study hair shafts in the way as scientists study tree rings.

Using this, they could see what proteins, and how much of each protein, was found in specific regions of a hair shaft.

They then compared white sections with coloured sections to see the difference.

Analysis of the proteins found that ‘greying is marked by the upregulation of proteins related to energy metabolism, mitochondria, and antioxidant defences’, the researches explain.

These may be triggered by increased stress levels.

Colouration is provided by melanin-loaded pods in special cells. Melanin is the same chemical which gives skin different tones, people with more melanin have darker ski n and the same applies with hair.

These melanin pods are supplied to trichocytes, the specialist cells which make up hair, via another cell specifically designed to produce melanin, called melanocytes in a person’s scalp in the hair follicle pigmentary unit (HFPU).

A total of almost 400 hairs were taken from a total of 14 volunteers and hairs fell into three main categories.

High-resolution analysis under an electron microscope revealed that white hairs had hardly any melanosomes. Rapid greying events were associated with the loss of these melanosomes, the study found.

Analysis revealed a single hair can go through phases of greying, but this can be reversed in as little as three days.

The process fluctuates based on a person’s physical state, including their stress levels, the authors found.

Greying and the reversal of greying was seen in hairs taken from all over the scalp.

It was also seen in pubic hair and beard hairs.

‘The existence of white hair shafts undergoing repigmentation across ages, sexes, ethnicity, and corporeal regions documents the reversibility of hair greying as a general phenomenon not limited to scalp hairs,’ the researchers say.