The 90-year-old cosmetics giant behind Elizabeth Arden and Gatineau filed for bankruptcy in the US yesterday.

Style icon: 90-year-old cosmetics giant Revlon, renowned for supermodel campaigns featuring the likes of Cindy Crawford (pictured), filed for bankruptcy in the US

But it was slow to follow women giving up flashy cosmetics like red lipstick for more muted tones in the 1990s.

And it has lost shelf space and sales to celebrity start-ups such as Kylie Jenner’s Kylie Cosmetics and Rihanna’s Fenty Beauty.

Revlon’s problems intensified with the pandemic as sales of lipstick tumbled with customers forced indoors. As a result sales tumbled 21 per cent in 2020.

Revlon has also been hit by supply issues, made worse by the pandemic, and the resulting product shortages helped push it into bankruptcy.

The filing was made in the US Bankruptcy Court for the Southern District of New York and the company listed assets and liabilities between £810million and £8.1billion, according to the documents. 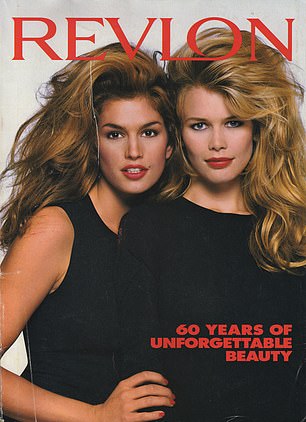 The business said it expects to receive £469million in financing from its lenders, which will keep day-to-day operations running.

Revlon president and chief executive Debra Perelman said the bankruptcy filing will ‘provide a clearer path for future growth’ while keeping products on the shelves.

Perelman’s father, billionaire Ron Perelman bought the business through a hostile takeover in the late 1980s.

In 1970, Revlon became the first beauty company to feature a black model, Naomi Sims, in its advertising.