Commuters have slammed transport bosses over cancelled trains and lack of social distancing on London buses as employees head to work in Monday morning’s rush hour.

One train passenger has hit out at South Eastern for cancelling trains, as another made claims of overcrowding on a Transport for London bus.

It comes as commuters stream back to their place of work following the coronavirus lockdown, with road data today showing how rush hour traffic has now reached near-pre-Covid levels.

One Twitter user, who tweeted a picture of a crowded train carriage today, said: ‘You can start by asking South Eastern to service their trains before Monday’s rush hour as they keep cancelling trains causing congestion on trains.’

Another, Dilasha Patel, who tweeted a picture from a London bus, said: ‘Maybe ask Sadiq Khan why Transport for London buses are not following maximum capacity.

‘For two mornings I’ve had 20 people on a 14 capacity bus. I’m leaving for work 40 minutes earlier today even though I get there 20 minutes before I start anyway!’ 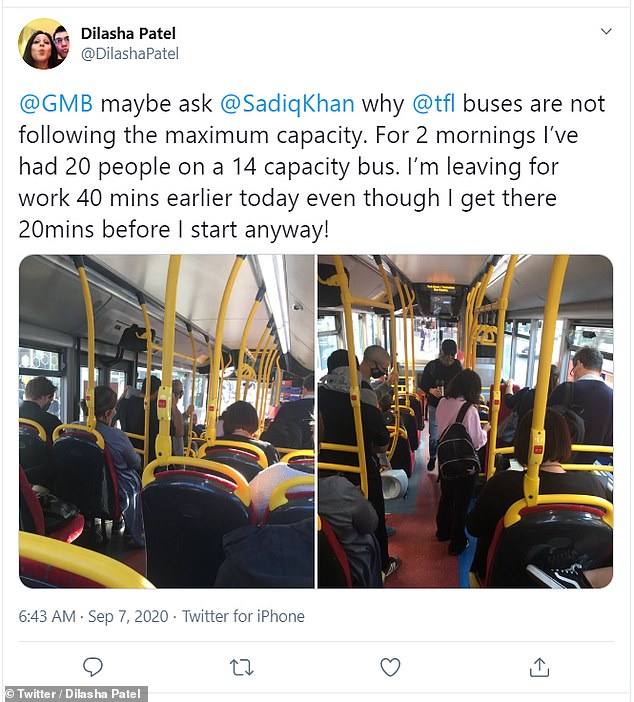 According to information on Transport for London’s website, double-decker buses can carry up to 30 passengers, while single-deckers, depending on size, can carry either 11 or 14 passengers.

The capacity limits were put on in the wake of the coronavirus outbreak.

Today, commuters were seen spilling into London’s major train stations, including London Waterloo, as more people head back to their place of work in the wake of the coronavirus pandemic.

The commuters, all wearing face coverings, as required by law, were queuing to get through the ticket gates at the busy railway station – a scene not often witnessed since the country was plunged into lockdown.

Traffic was also busy on the roads this morning, particularly on the M25 around London.

The A40 at Perviale in West London was also seen with queues of traffic on either side of the six lane road. 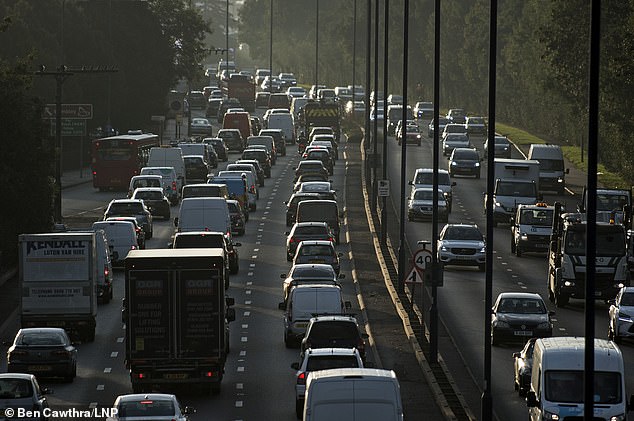 It comes as train services are ramped up from today to 90 per cent of pre-Covid levels as schools reopen and more workers return to the office.

The Rail Delivery Group (RDG), which represents train operators and Network Rail, said services across Britain will be increased to around 90 per cent of pre-coronavirus pandemic levels from September 7.

Timetables were slashed in March as the virus led to a reduction in available railway workers and demand for travel.

The RDG said new timetables being introduced next month have been devised through communication with schools and other places of education in a bid to run more frequent services or add extra carriages on potentially busy routes.

Schools in England and Wales are reopening in early September.

ScotRail increased services earlier this month ahead of lessons resuming at Scottish schools.