Sweeping communications outages continued to plague large swaths of Tennessee on Saturday as federal investigators combed the site for clues into the explosion of a recreational vehicle that rocked sleepy downtown Nashville on Christmas.

Police emergency systems in Tennessee, Kentucky and Alabama, as well as Nashville’s COVID-19 community hotline and a handful of hospital systems, remained out of service due to an AT&T central office being affected by the blast. The building contained a telephone exchange, with network equipment in it — but the company has declined to say exactly how many people have been impacted.

Meanwhile, investigators shut down the heart of downtown Nashville’s tourist scene — an area packed with honky-tonks, restaurants and shops — as they shuffled through broken glass and damaged buildings to learn more about the explosion. While authorities are certain that this was a deliberate act, they have been mum on saying publicly who carried it out and why.

Mayor John Cooper has enforced a curfew in the downtown area until Sunday via executive order to limit public access to the area.

AT&T said restoration efforts are facing several challenges, which include a fire that “reignited overnight and led to the evacuation of the building.” This has forced their teams to work with safety and structural engineers and to drill access holes into the building in order to reconnect power. 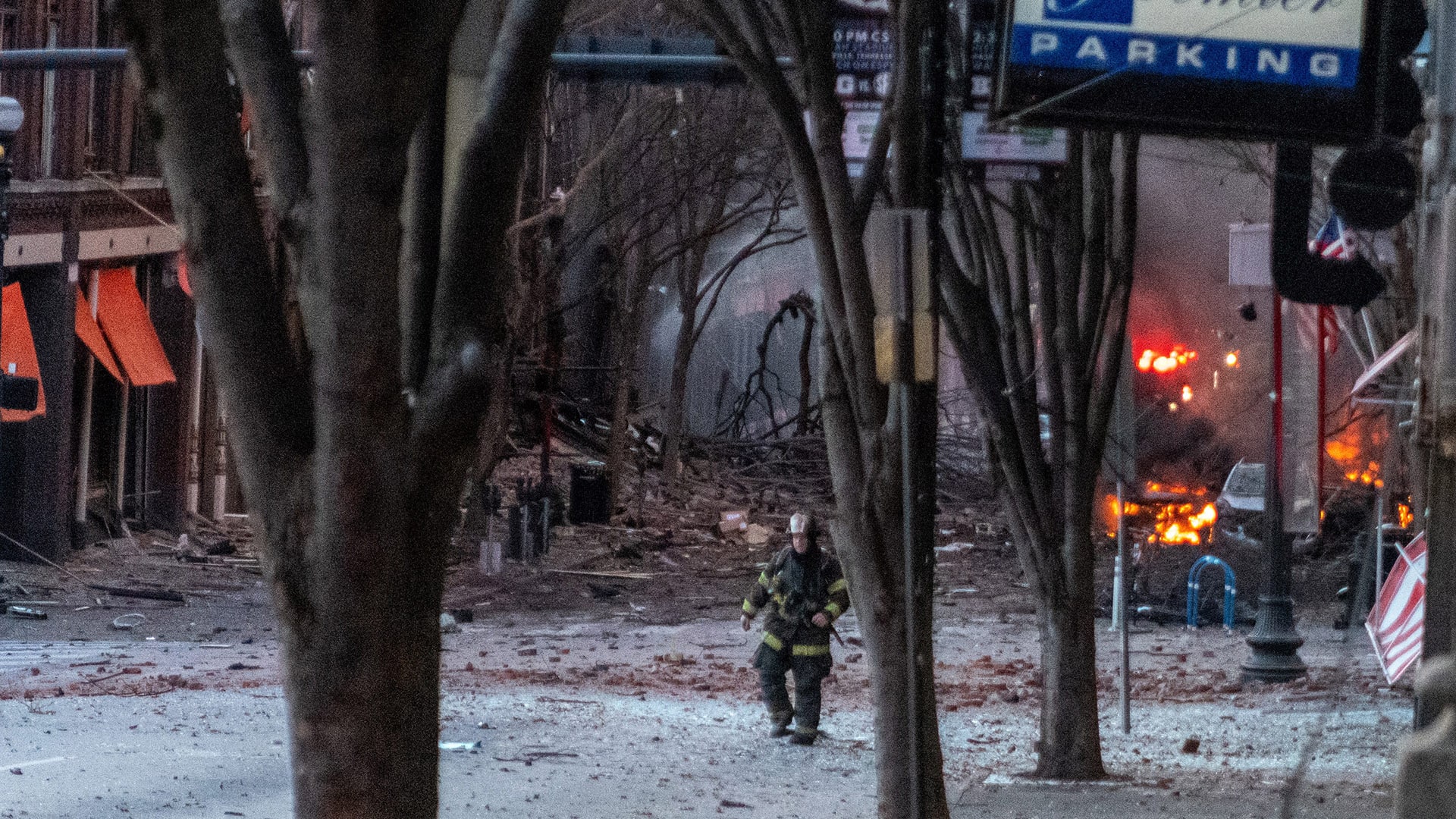 The CBC’s Derek Stoffel reports on the latest developments on the explosion that shook the largely deserted streets of downtown Nashville early Christmas morning. 1:31

“Our teams continue to work around the clock on recovery efforts from yesterday morning’s explosion in Nashville,” the company said in a Saturday statement. “We have two portable cell sites operating in downtown Nashville with numerous additional portable sites being deployed in the Nashville area and in the region.”

Gov. Bill Lee asked the White House on Saturday for federal assistance due to the “severity and magnitude” of the explosion’s impact. At least 41 buildings were damaged, and communications systems — including residential and cellphone service and 911 call centres — failed across the state, he said. Kentucky and northern Alabama were also affected, he said.

Ray Neville, president of technology at T-Mobile, said on Twitter that service disruptions affected Louisville, Ky., Nashville, Knoxville, Tenn., Birmingham, Ala., and Atlanta. “We’re working diligently w/ our partner on restoration. We apologize for any inconvenience. Updates to follow,” he said in a tweet late Friday.

The outages had even briefly grounded flights at the Nashville International Airport, but service was continuing normally as of Saturday.

According to metro Nashville police Chief John Drake, police officers responded on Friday to a report of shots fired when they encountered the RV blaring a recorded warning that a bomb would detonate in 15 minutes. Police evacuated nearby buildings and called in the bomb squad. The RV exploded shortly afterward.

Law enforcement officials have said they believe the blast was intentional but don’t yet know a motive or target.

“This morning I toured the site of the bombing,” the governor tweeted Saturday. “The damage is shocking and it is a miracle that no residents were killed. [First lady Maria] and I continue to pray for those who sustained injuries from the blast.”

Lee had been in quarantine after his wife contracted COVID-19. However, the Republican said that both had tested negative, allowing the two to visit downtown Nashville. Lee said his wife had “fully recovered.”

On Friday, Drake told reporters that investigators at the scene “have found tissue that we believe could be remains, but we’ll have that examined and let you know at that time.” No new information regarding the tissue was made available on Saturday.

The FBI has taken the lead in the investigation, agency spokesperson Joel Siskovic said. Federal investigators from the Bureau of Alcohol, Tobacco, Firearms and Explosives are also involved in the investigation. The FBI is the primary law enforcement agency responsible for investigating federal crimes, such as explosives violations and acts of terrorism.

In West Virginia, a hospital system said Saturday that it was experiencing network connection issues directly related to the Nashville explosion. South Charleston-based Thomas Health, which operates two hospitals, said on its Facebook page that it didn’t have an estimated time of restoration.

Similarly, Sumner Regional Medical Center in Gallatin, Tenn., said on its Facebook page that it was operating without access to some of its systems, including medical records.

“We prepare for situations like this and moved immediately to paper records. There has been no disruption to the delivery of patient care, and no cause for concern for this temporary issue,” the centre said in a post Friday.