Dave Chappelle tackled Kaye West’s recent antisemitic remarks at the start of Saturday Night Live’s show in a lengthy monologue lasting almost 17 minutes in which he appeared to defend the rapper’s comments.

Chappelle began by reading a letter he had prepared that denounced antisemitism.

‘I wanted to read a statement I prepared: I denounce antisemitism in all its forms and stand with my friends in the Jewish community,’ he began.

‘And that, Kanye, is how you buy yourself some time,’ he joked.

Chappelle noted how he had never heard anyone do anything good after using the phrase ‘the Jews.’

It comes after the rapper made a series of antisemitic attacks, claiming that a ‘Jewish underground media mafia’ is ruining his career and that he would go ‘death con 3’ on Jewish people.

Deafcon – also known as defense readiness condition – is an alert used by the US Armed Forces to indicate how quickly the military can be deployed during deadly emergencies and attacks.

The 49-year-old comedian then went on to joke about how West believed himself to be untouchable until Adidas dropped him after his recent comments.

‘I can’t even remember how it started,’ Chappelle said before recounting West’s offending tweet: ‘I’m gonna go deathcon three on the Jews’. What is he going to do to the Jews?’

‘I grew up around Jewish people and I have a lot of Jewish friends so I am not freaked out by your culture. A year ago I saw Kanye on a podcast called DrinkChamps.

‘He said ‘I’m a billionaire’. It was funny but when he went on again he was on something and he said “I can say anti-Semitic things and Adidas can’t drop me. Now what?”‘, Chappelle explained.

‘It’s a big deal. He broke the show business rules of perception. If they’re black then it’s a gang. If they’re Italian it’s the mob. But if they’re Jewish it’s a coincidence and you should never speak about it!’ 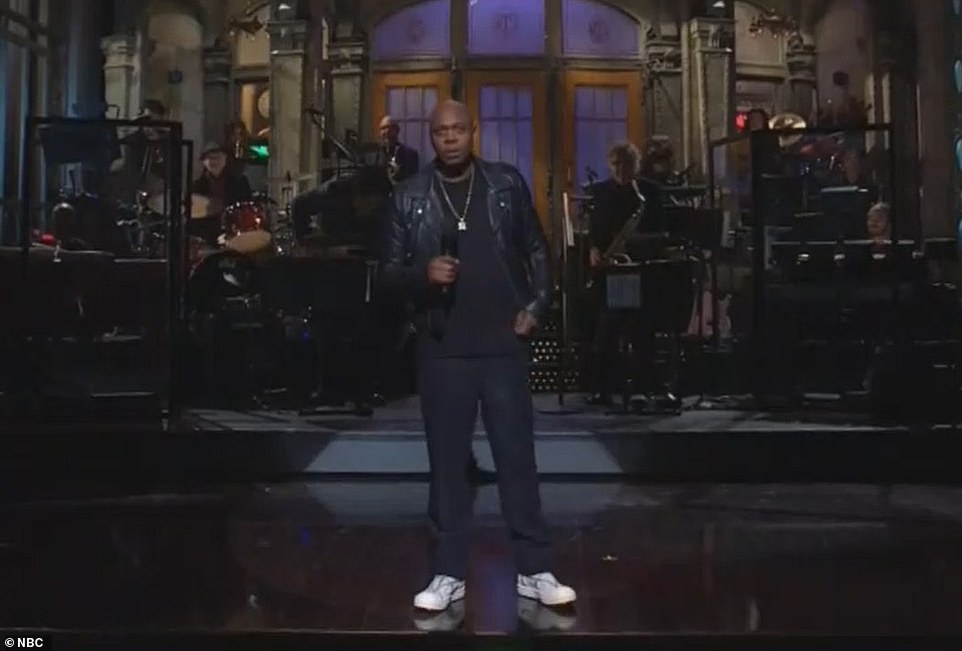 The 49-year-old comedian told how West believed himself to be untouchable, ‘I don’t think Kanye’s crazy at all,’ Chappelle said. ‘He’s possibly not well.’

But then his monologue drew gasps and groans from the audience as he jokingly went on to defend West’s comments.

‘I just feel if you go out to Hollywood you might connect some kind of lines and come under the delusion that the Jews run Hollywood. It’s not a crazy thing to think. But it’s a crazy thing to say out loud at a time like this!’

The comedian and West have a long history together going back to when West performed on Chappelle’s Show in the early 2000s.

Despite focusing on West’s cancellation, Chappelle mostly ignored his own recent controversy that saw him come under fire for making transphobic and homophobic jokes. 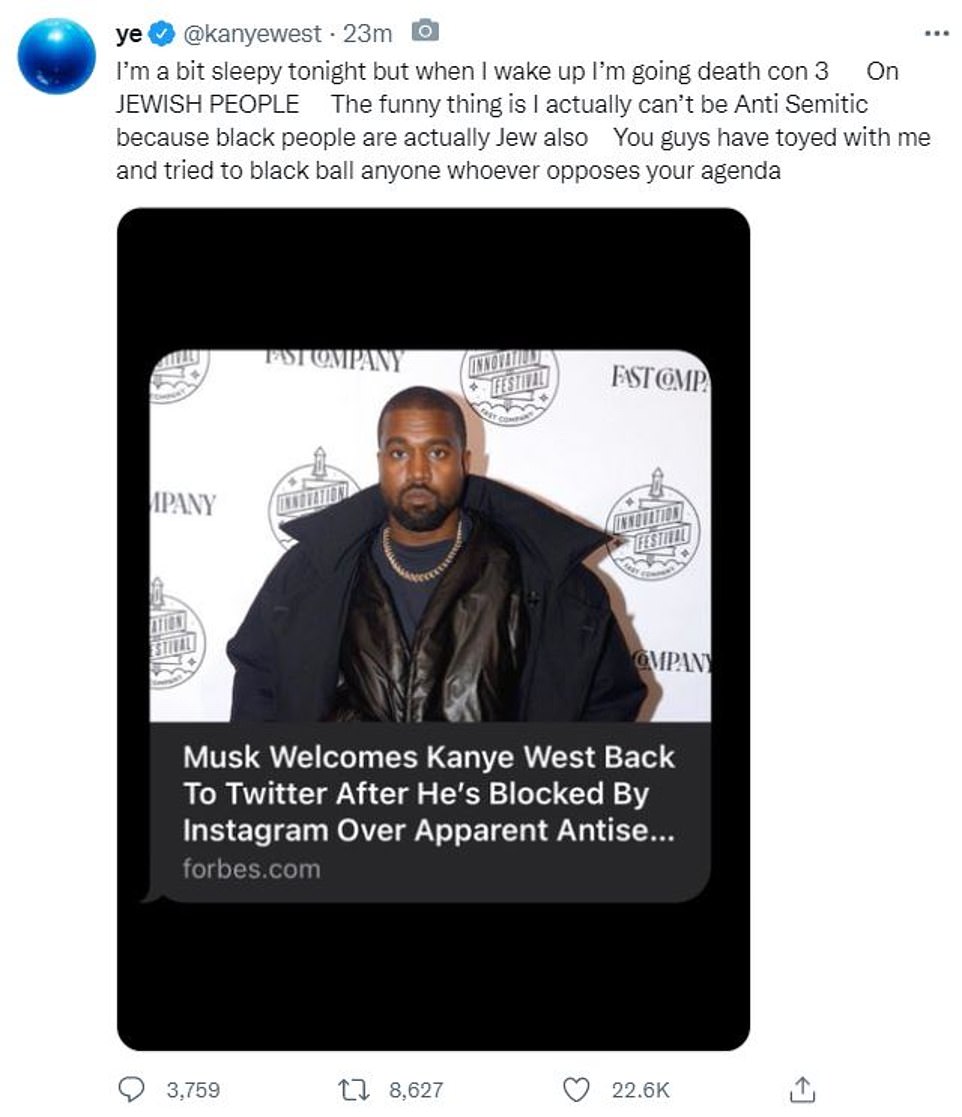 Last month, Kanye West tweeted how he would be ‘going death con 3 on JEWISH PEOPLE’

Irving was suspended from the Brooklyn Nets for at least five games after he shared a link to a documentary that contains antisemitic sentiments.

‘He was slow to apologize,’ the host said. ‘The demands to get back in their good graces got longer and longer, and this is where I draw the line: I know the Jewish people have done some terrible things all over the world, but you can’t blame that on black Americans. You just can’t.’

Next Chappelle looked back at Donald Trump’s presidency and the midterm elections in which he lampooned at Senate candidate Herschel Walker calling him ‘observably stupid.’

Chappelle noted how some people believe the Trump era is over but he shared how being from Ohio he could confirm that it was not the case.

‘He’s very loved. And the reason he’s loved is because people in Ohio have never seen somebody like him,’ Chappelle explained as he labelled the former president an ‘honest liar’.

He noted how living in Ohio ensured he was able get a firsthand look at Trump’s fanbase: ‘poor white people’. 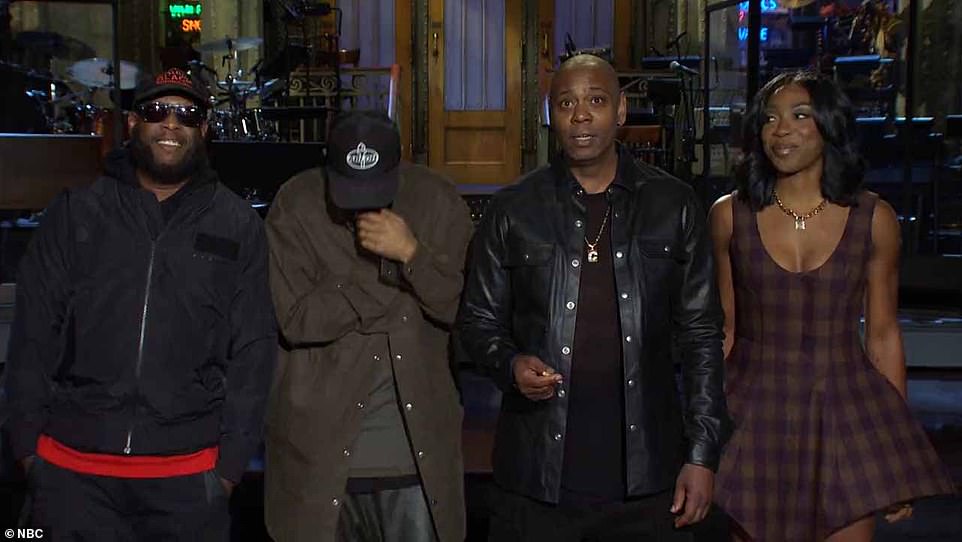 Prior to hosting, Dave Chappelle made light of the backlash at him hosting Saturday Night Live as he appeared in an advert ahead of this weekend’s show

It was Chappelle’s third time as host of the show.

The performer’s debut as the series’ host took place in November of 2016, just after former president Donald Trump was elected into office.

The comedian subsequently returned to the show in 2020, during an episode that also followed that year’s presidential election.

Prior to his appearance some SNL staff members publicly threatened to boycott the program if he hosted it.

One even took to Instagram to argue ‘transphobia is murder and it should be condemned’ after his slot was announced.

Some were said to be furious the showrunners chose the controversial comedian due to his history of making trans and gay jokes.

The SNL writers were so angry, they were boycotting the episode, an insider told Page Six. The show’s actors will not be taking a stand, the insider noted.

‘They’re not going to do the show,’ the unnamed insider was quoted as saying to the news site. ‘But none of the actors are boycotting.’ 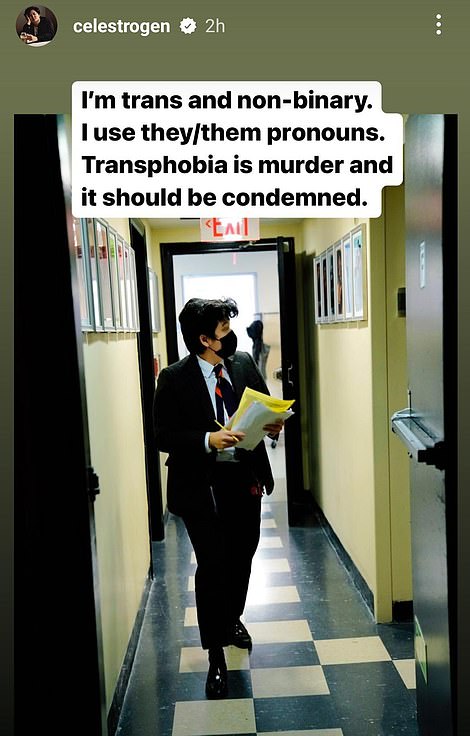 Prior to Chappelle hosting, non-binary SNL writer Celeste Yim posted this to their Instagram stories

A representative for Chappelle said there had been no signs of a boycott when he attended meetings with the writers during the week.

Chapelle was at 30 Rock in New York City on Tuesday where he met with both writers and producers to hear ideas.

The comedian’s rep said: ‘The room was full of writers. They all pitched ideas and they seemed very excited about it…. Dave is looking to have some fun.’

But non-binary SNL writer Celeste Yim posted a picture of themselves in what appeared to be the writer’s offices to their Instagram Stories.

They wrote: ‘I’m trans and non-binary. I use they/them pronouns. Transphobia is murder and it should be condemned.’

While Yim did not directly reference Chappelle, the timing suggested their post was criticism of Chappelle being chosen as host.

Chappelle last hosted the show well before the release on of his Netflix special ‘The Close’, which angered some due to some of the jokes being about trans people.

In The Closer, Chappelle is at pains to stress that he does not hate transgender people, and tells a long anecdote about a trans woman comic, whom he describes as a friend, who came to his defense in earlier entanglements with the community.

He was criticized for intentionally misgendering the trans friend. 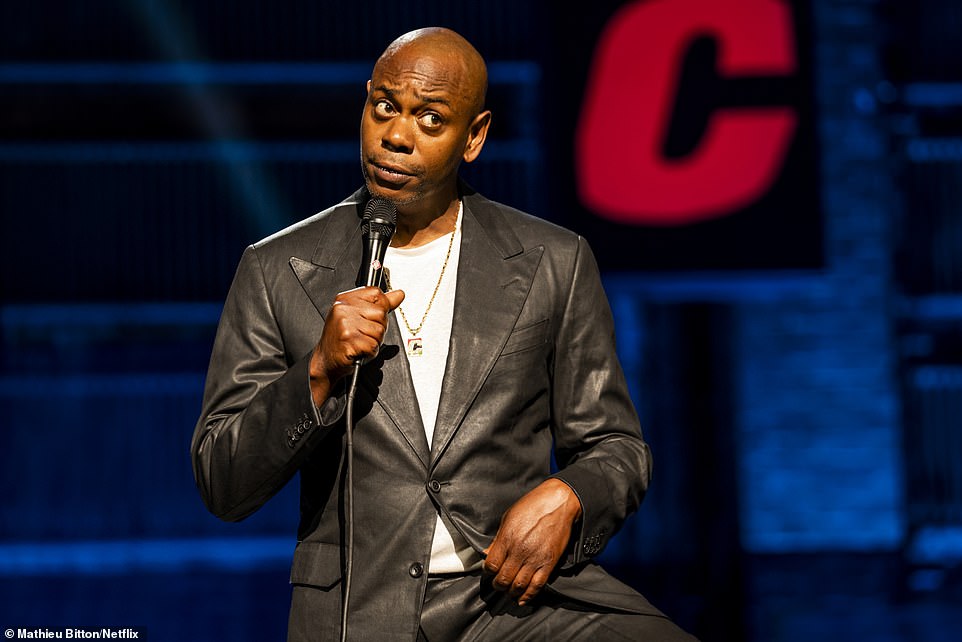 He remarked women are entitled to feel anger toward transwomen, since Caitlyn Jenner won Glamour magazine’s 2015 Woman of the Year award.

The star also joked about the anatomy of transwomen, joking they lacked real female reproductive organs and that they did not have blood but ‘beet juice.’