They are the most essential item in any man’s wardrobe. The first thing he puts on in the morning and the last thing he removes at night.

He will (hopefully) pull on a new pair each day, sometimes twice if tonight is that special night.

Most importantly, they offer him comfort and support, not to mention protection, where it is most needed.

With all that in mind, a man’s underpants should really be something of a personal preoccupation in his life. As important to him, say, as the car he drives, the football team he cheers on, or the brand of whisky he slurps before bedtime.

You would think so, wouldn’t you? Actually, the complete opposite appears to be true.

New research shows most chaps, in fact, couldn’t give two hoots about what undies they hang around their waist each day.

To most, their significance rates on life’s Richter scale somewhere in the low single digits, as relevant, say, as whichever toothpaste he squirts on his toothbrush.

The average British male only invests in new underwear once every five years, according to a survey carried out by menswear brand Thomas Clinch.

Some even hang on to their tattered pants for more than 20 years. Family dogs don’t even hang around that long.

Most pathetically, more than two in five admit their partners buy their underwear, while more than a third still rely on their mothers!

I know there are more pressing matters taking place around the globe right now, but isn’t there something vaguely depressing about those statistics? When I first read them, they rekindled unpleasant images I’d been trying to rid myself of for some time.

Several years ago, I was a member of a gym where I was surrounded in the changing rooms by droopy, middle-aged men walking around with awful yellowing things yanked over their hips which I assumed had gone out with rationing. You know the sort I mean. Vast, shapeless nappy-like monstrosities Mr Bean probably favours. 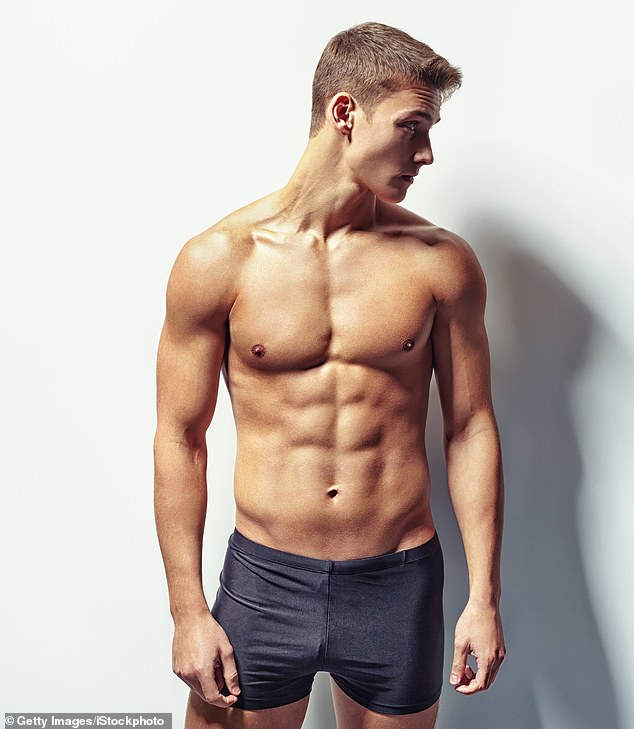 Henry explained that menswear sales are booming, but undergarments could be being neglected because of the price tags (file image)

Some of these old boys had worn these unholy looking garments to death, so that the elastic had disintegrated around the waistband, leaving them flopping around their belly buttons. What would possess someone to keep wearing something so sad and raggedy?

What is most surprising about this is it contradicts the so-called ‘metrosexualization’ of men, which has supposedly taken place over the past decade. We’re constantly being told how much more care we are taking in our appearance.

Menswear sales are booming. Nourishing skin products and whiffy unguents are flying off the chemist’s shelves.

Ever more intimate levels of grooming are on the rise. Some boys now regard a trip to the tanning shop, or waxing clinic, as much a part of their monthly routine as visiting the hairdresser.

Why then do their undergarments remain so neglected? Is it due to the sometimes terrifying price tags? A pair of Calvin Klein classic black boxer briefs will set you back £20. Then again, you can get three pairs for the same price at Uniqlo — and they’re probably some of the comfiest I’ve ever worn. 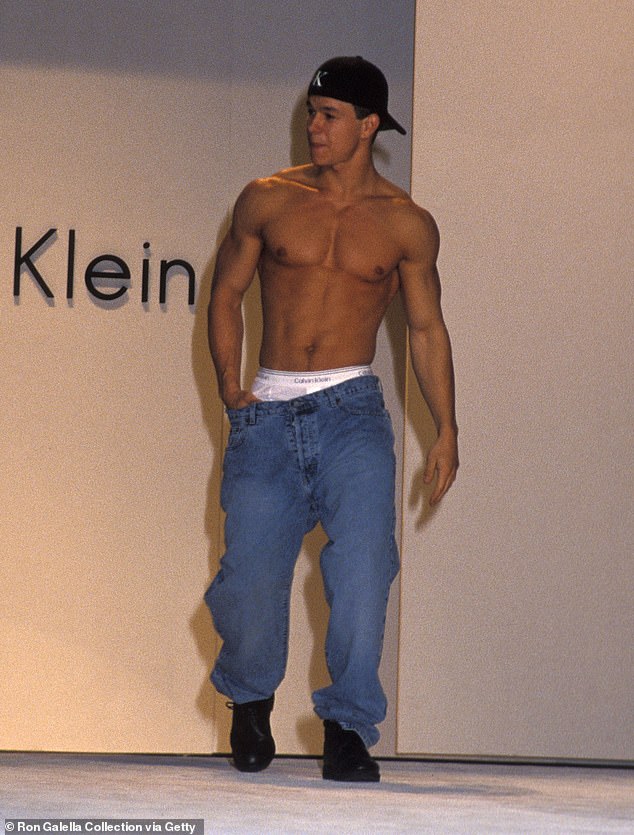 Henry said he remembers thinking ‘Ugh, put it away,’ when he saw Mark Wahlberg (pictured) posing for Calvin Kelin throughout the Nineties

So, I have to apportion much of the blame to antipathy. For most men, pants are worn out of necessity rather than anything else.

It’s true there has been an increase in men’s underwear brands, but I’ve always questioned the way these are marketed. There is something about undie ads that makes fellas feel uncomfortable.

Back in the Nineties, you could barely open a magazine without seeing Hollywood actor Mark Wahlberg posing for Calvin Klein.

But, as a teenager, whenever Marky Mark (as Wahlberg was known back then) popped up, showing off his bulge, I remember thinking, ‘Ugh, put it away,’ rather than any urge to go shopping.

Provocative billboards of David Beckham or David Gandy posing in their smalls can also provoke a degree of inadequacy in men. Seeing unattainable specimens in skimpy finery can make the average bloke think, ‘this isn’t for me’. Deep down, we’re insecure souls. 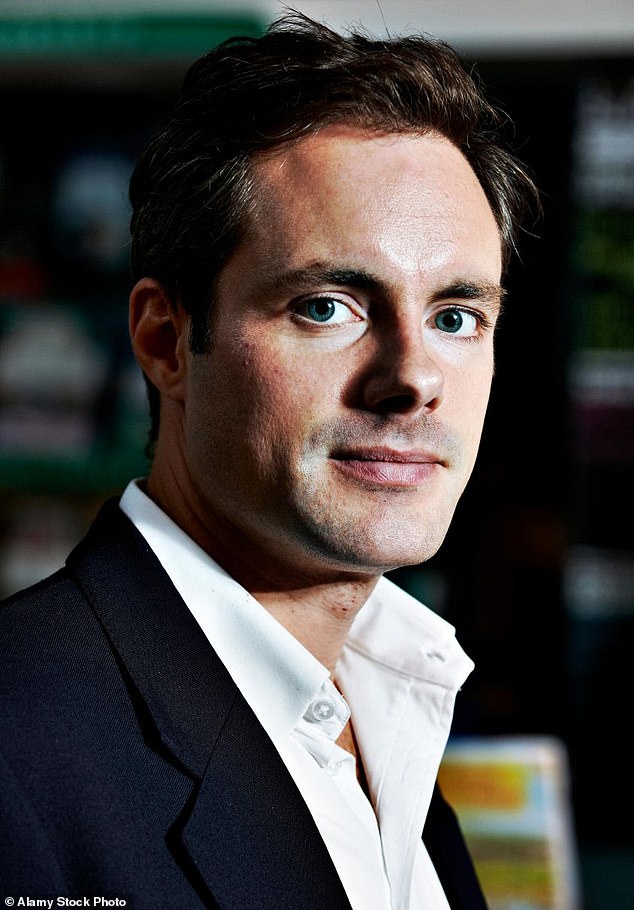 Quite a different story in the sprawling women’s underwear sector, where lingerie has been successfully sold down the years as a feel-good item, something which can be worn to give ladies that psychological boost.

I once met someone who owned a bespoke undergarments business who told me she had made a bra for £20,000. Business was booming, apparently.

By contrast, I suspect most men regard spending cash on their unmentionables as pointless, like ironing socks or wallpapering the attic. Pants are simply things to be bought without a second thought, possibly in packs of 12, then shoved into a drawer for a decade.

Well, this has got to stop!

To all men I say: invest in your pants. This need not be an expensive overhaul. Your drawers do not need to be crafted from silkworms hand-reared on organic caviar or anything like that. Something plain and cotton will suffice.

Boxer short? Brief? Boxer brief? Whatever you fancy, though bright colours should be left well alone. Best to avoid looking like you’re wearing a bubble gum wrapper down there. 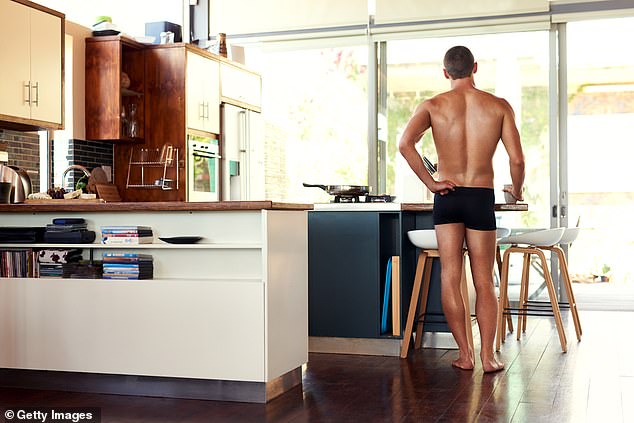 You will discover good underwear makes a man feel great. That satisfying twang of snapping on a decent pair will become an essential part of your morning, a zingy confidence boost to start the day.

It might even put a bit of pep into your personal life. What woman doesn’t appreciate a man who takes pride in his appearance? No girl grew up dreaming of landing a man who wears something which looks as if it might have fallen off Compo from Last Of The Summer Wine’s washing line.

And no more relying on birthdays and Christmases to keep your supply going. Instead, your underwear drawer should become like a well-nurtured plant, receiving endless replenishment.

Selfridges has a wonderful department all to itself you should visit. It’s like an Aladdin’s cave of superfine cotton.

Oh, and to that guilty third still relying on mummy to buy your panties: shame on you!