Ngakuru, the global leader of the Comancheros bikie club, was taken into custody in Turkey in recent days however Australian authorities are still working on figuring out where he is.

‘We have heard he has been arrested and we’re trying to confirm it,’ a NSW Police source told the Daily Telegraph on Sunday.

Ngakuru, 42, left Australia in 2010 and assumed the role as ‘Supreme Commander’ of the Comancheros bikie club after the club’s leader Mark Buddle was arrested in Turkey and extradited to Australia in August, last year.

Ngakuru is estimated to have a fortune of more than $100million and has been accused by police of running major drug importations into Australia for distribution across the country.

The senior bikie is understood to be running Comancheros operations from Turkey along with Hakan ‘Big Hux’ Ayik, who fled Sydney while on bail for drug charges in 2010.

The pair went to school together at James Cook Boys Technology High School in the southern Sydney suburb of Kogarah.

The New Zealand-born bikie faces possible deportation back home as there are a number of warrants out for his arrest.

Ngakuru is rarely photographed, but a recent image showed the bikie boss living large on a yacht beside a large Turkish flag.

In 2010 Ngakuru and his wife Reynee mysteriously left Turkey and moved to Dubai before eventually returning and settling in Turkey.

Buddle led the gang during that time but also departed Australia for Dubai around 2013 with his girlfriend Mel Ter Wisscha and their young children. 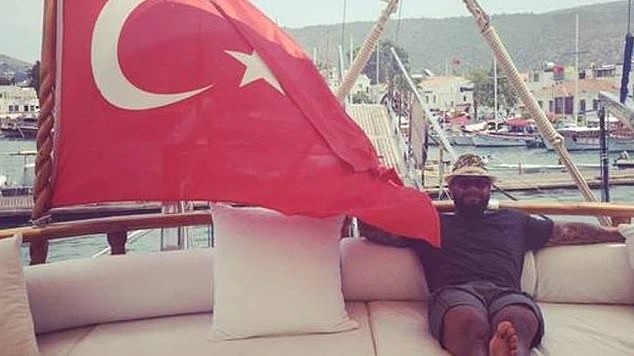