Comanchero bikie Allan Meehan has been snapped smooching wife Elise on a luxury yacht, in a picture estimated to have cost the flamboyant gang boss $25,683.

In a photo posted on Friday, Meehan wore an outfit of designer clothes and jewellery worth $7,000, including his signature gold and black Versace silk shirt.

His wife also wore Versace with Balenciaga and Armani accessories costing around $5,000 – on a yacht that can cost up to $14,000 to hire for half a day.

The new photo comes a day after the gang leader unveiled his $100,000-plus custom-built Harley Davidson V-Rod with a Comanchero paint job and an eye-catching gold frame and engine.

The ‘power couple’ took to Sydney Harbour sporting a combined value of almost $12,000 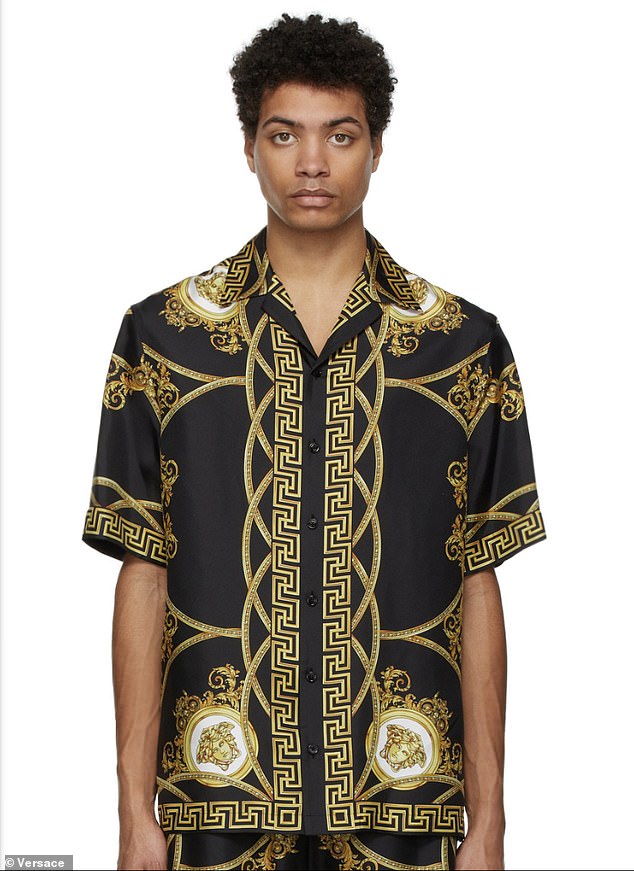 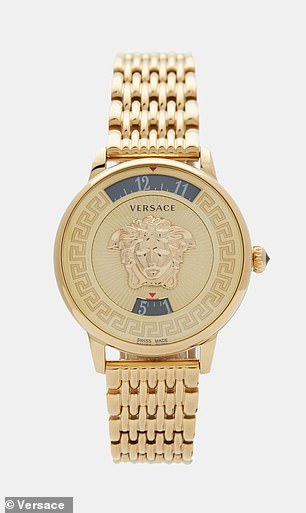 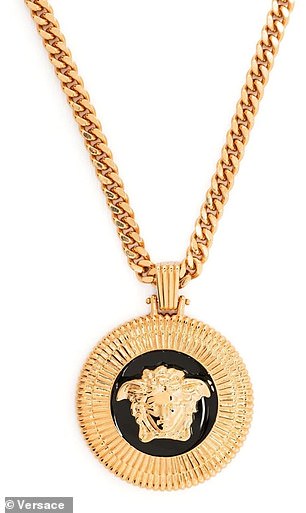 Meehan appears to be sporting a Versace Medusa Icon watch valued at $2,910 (left) The bikie boss wore a necklace similar to this Versace Medusa plaque detail necklace worth $1,957 (right) 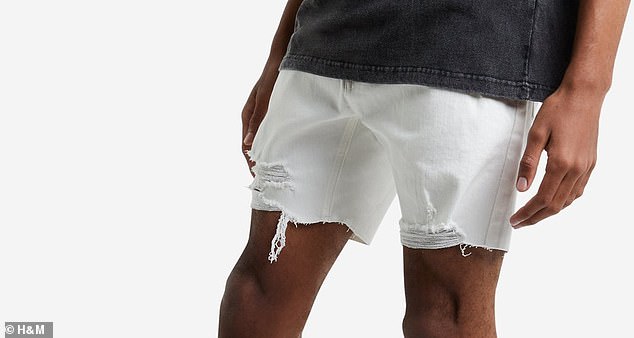 Meehan could have been looking for a bargain, picking out these H&M shorts for a super modest $50 (pictured)

The pair could be saving some pennies as Meehan’s ripped white shorts look like a $50 H&M find and Elise’s skirt may be a humble $55 Cecilia mini skirt from Oh So Fetch.

And the private luxury super yacht seen in the photo can cost up to $14,000 to charter for a four-hour harbour cruise – bringing the final bill for the day out to $25,683.

‘You’re a lucky man bud. She’s gorgeous,’ said one admirer, while another said, ‘When a man has a powerful women, the man is pretty much untouchable.’ 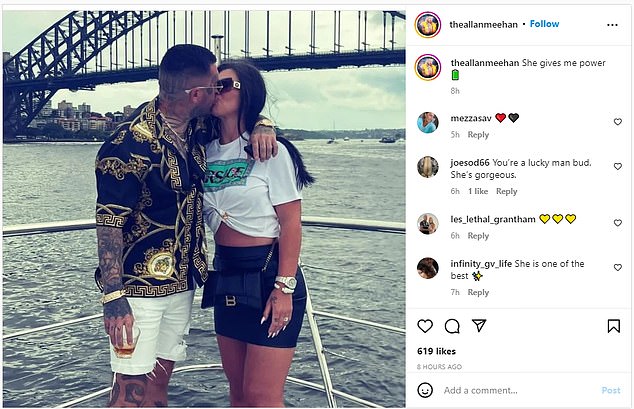 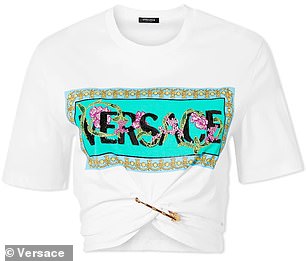 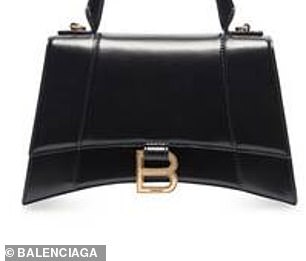 Elise’s Versace tee seen in the love struck image was a stylish fit and is retailed for $1,132 (pictured) while her her $2,950 Balenciaga handbag (pictured right) looked the part as the couple puckered up 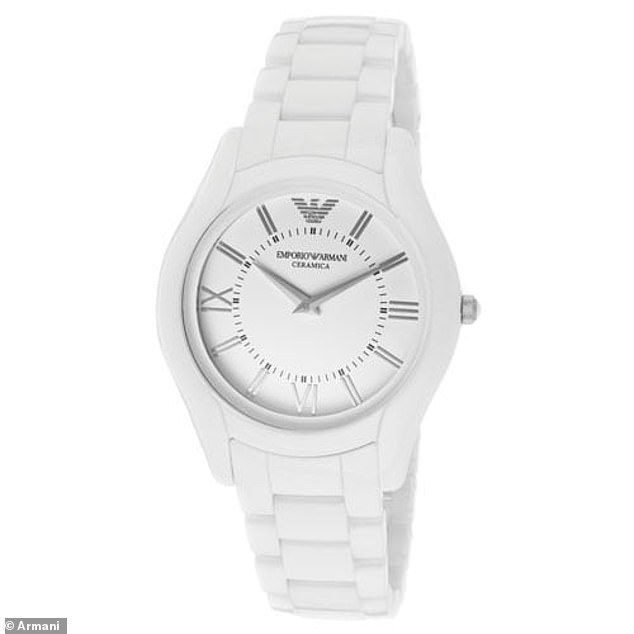 This Armani Ceramica Silver Womens’ AR1443 Ceramic Roman Letter Watch (pictured), valued at $434 could have been the one Elise was wearing

Regular models of the collectors’ special – which has now been discontinued – are currently on sale in Australia for up to $100,000. 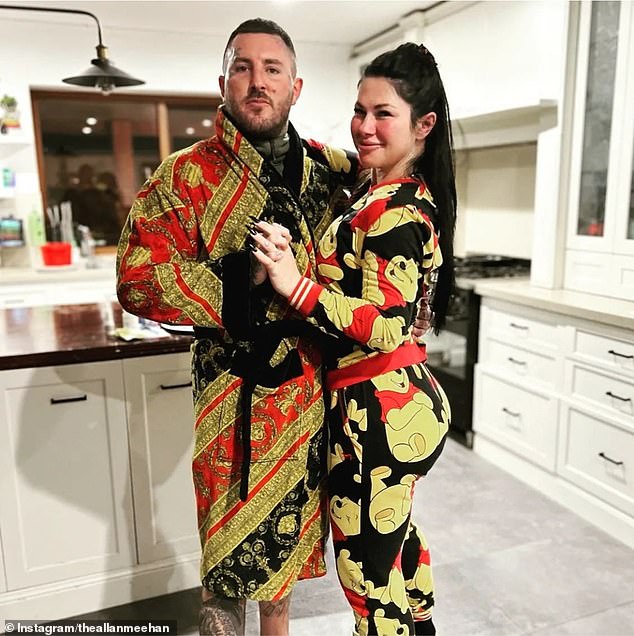 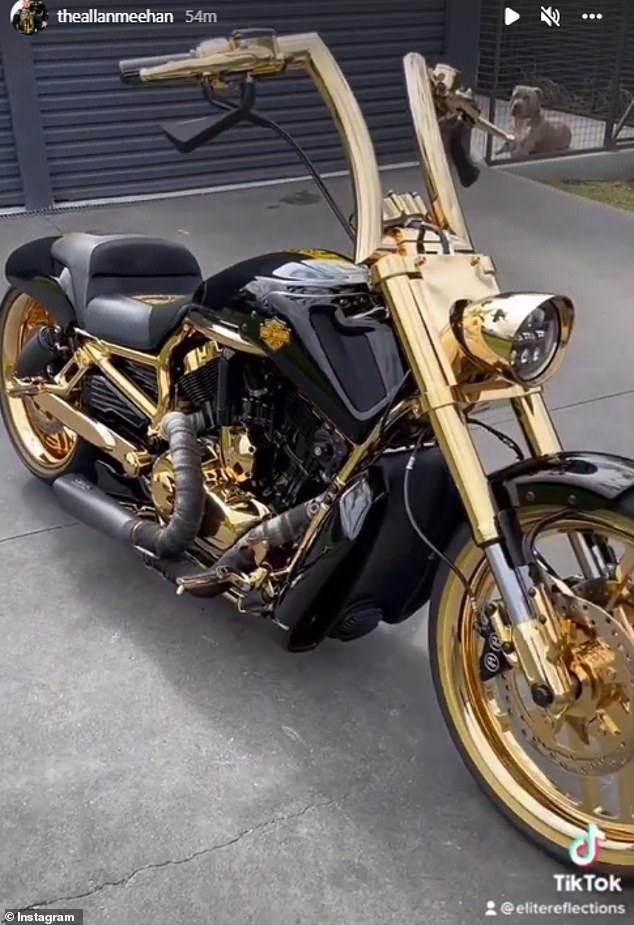 A breakdown of the $12,000 estimated worth of threads the pair wore

Meehan took to Instagram to reveal the machine in a video story showcasing its custom club colours design, to the soundtrack of Wiz Khalifa’s Black and Yellow.

Even the kickstand, brakes, clutch, gear lever and foot pegs are gilded, although it’s unclear if it’s gold-plated or golden chrome.

The tank and seat of the bike are jet black with the two parallel stripes in the club’s signature yellow, embossed with ‘Comanchero’ and tattoo-style demonic skulls, while the seat bears the club badge.

The bike appears to be registered in NSW according to the number plate attached to the mudguard – but the number has been hidden by black masking tape.

Meehan has become a regular poster on Instagram in recent weeks although his pictures and videos rarely remain online for long.

Last month pictures emerged of him in a scruffy dressing gown when police turned up at his door in the Southern Highlands.

After comments were made about his nightwear, he returned to Instagram in a $1000 Versace dressing gown, again in the trademark club yellow and black colours.

He appeared in the photograph alongside his wife in matching colour – but she had on more humble $55 Winnie the Pooh pyjamas from Peter Alexander.

Meehan’s new motorbike is a classic that’s in high demand among Harley Davidson aficionados, with many costing more now second hand than they did when new. 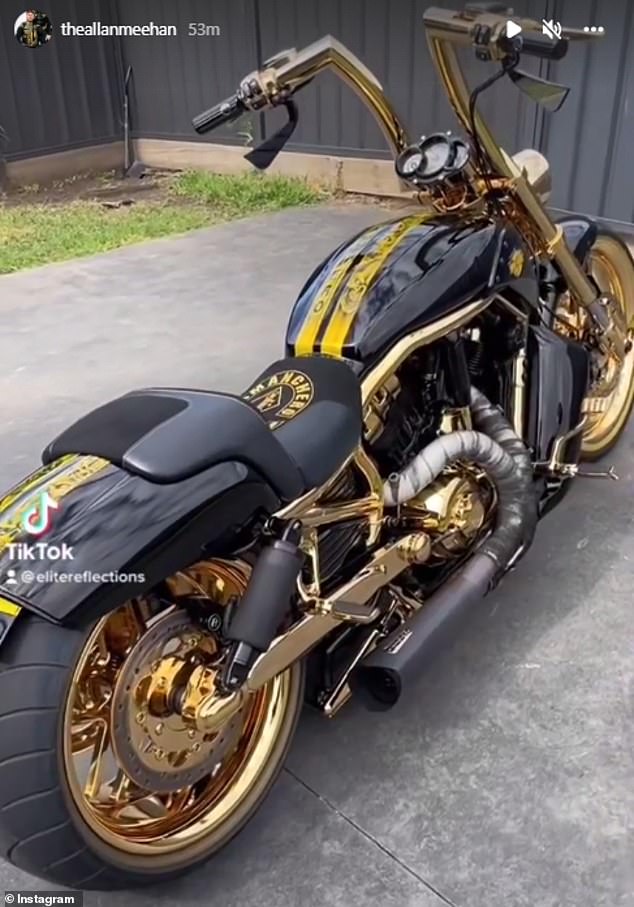 Regular models of the collectors’ special – which has now been discontinued – are currently on sale in Australia for up to $100,000 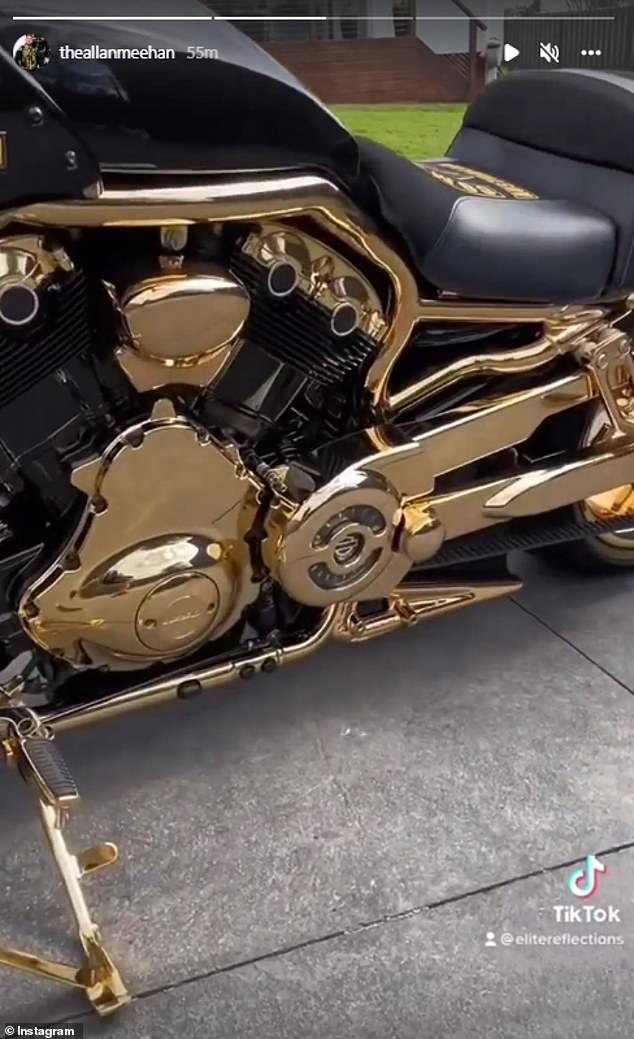 Meehan took to Instagram to reveal the machine in a video story showcasing its custom club colours design, to the soundtrack of Wiz Khalifa’s Black and Yellow 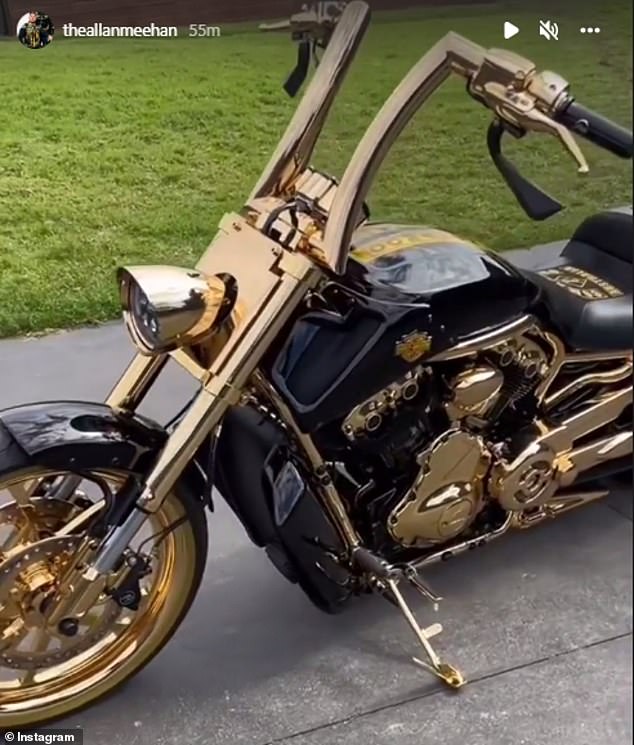 Its belt-driven fat rear tyre is designed to take riders screaming up to 100kmh in under four seconds before powering on to a top speed of more than 200kmh.

It was designed to compete with the Japanese and American muscle bikes and featured liquid cooling and double overhead camshafts.

In an quirk of design the ‘fuel tank’ is actually the cover for the coolant port and air filter, with the petrol actually stored under the seat area.

Motorcycle Cruiser rated it a winner and added: ‘The V-Rod was intended to bring in more than the usual suspects, and it did.’ 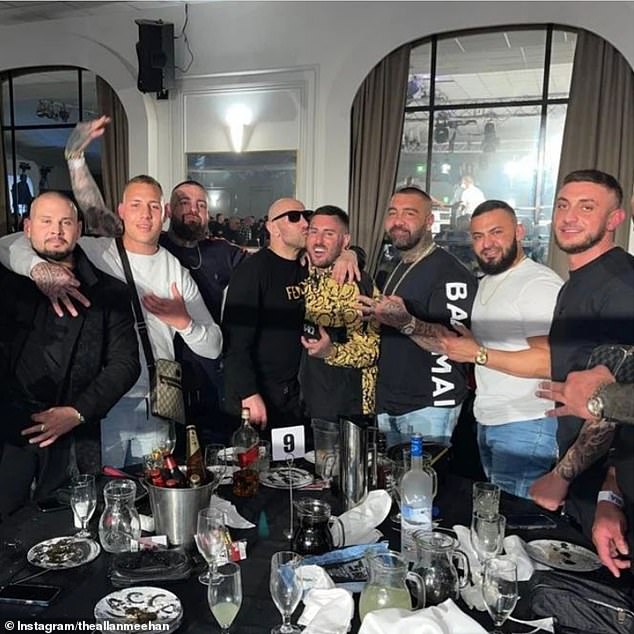 Over the past month Meehan has posted a series of images alongside Tarek Zahed and other associates, all decked out in designer clothes and jewellery at a Melbourne restaurant.

Zahed in May miraculously survived an assassination attempt at Bodyfit Gym in Sydney’s Auburn when more than 20 bullets were fired inside the health club.

The ‘Balenciaga Bikie’ was rushed to hospital in critical condition and was taken into surgery with bullet wounds to his head and body, including one that pierced straight through his eyeball. His brother Omar, 39, was killed during the shooting.

Meehan posted another picture from Sunday’s celebration, this time demanding a significant payment from the media for running his content. 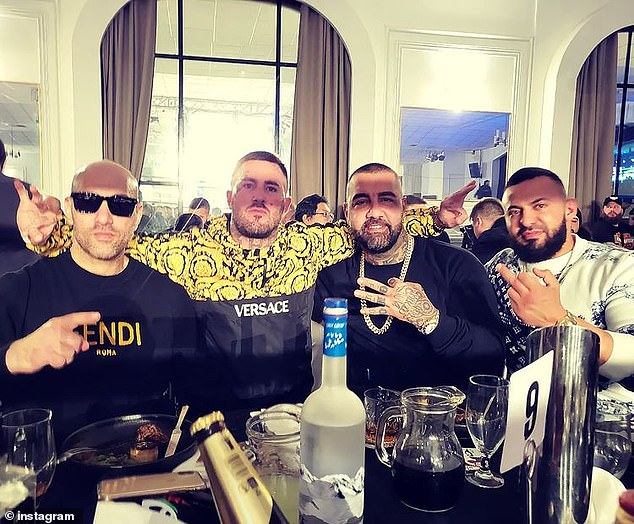 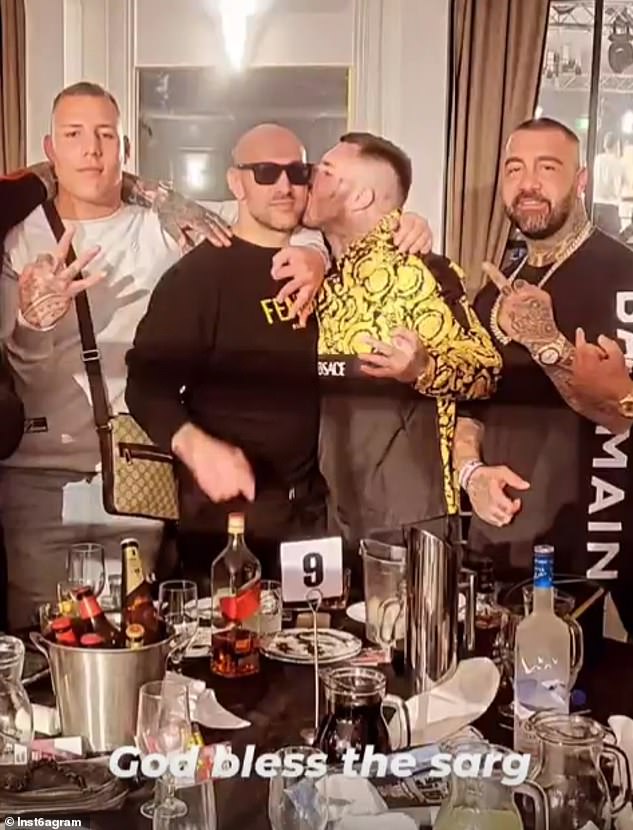 Meehan on last week posted the first image of Zahed since the shooting that nearly killed him.

Doctors were astonished by Zahed’s rapid recovery that saw him released from hospital less than two months later following lengthy discussions about whether he would need limbs amputated.

Meehan shared a photo with his arm around a smirking Zahed who posed with a single finger raised. 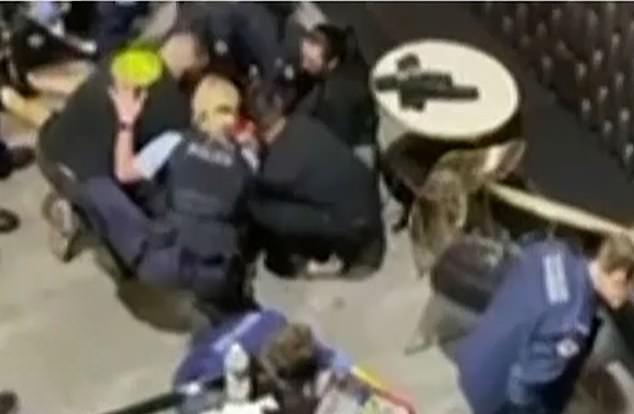 Zahed was rushed to hospital in critical condition and was taken into surgery with bullet wounds to his head and body, including one that pierced straight through his eyeball. His brother Omar, 39, was killed during the shooting at the Bodyfit health club in Auburn, Sydney (pictured)

They were joined by two others, one a heavily-tattooed man holding up three fingers while the other raised his middle finger to the camera.

They appear to be at a fancy eatery with a bottle of Grey Goose Vodka visible in the foreground.

Despite being being shot 10 times, there are no visible scars on the face of the bikie hard man who is wearing dark sunglasses in the photo.

A source said he has completely lost sight in his right eye, rendering him virtually blind as he already had reduced vision in his left eye.