A Guardian columnist who was accused of ‘transphobic content’ by 300 employees at the paper has announced her resignation.

Suzanne Moore was at the centre of a storm in March after publishing a column about feminists being abused by trans extremists.

In the article, ‘Women must have the right to organise. We will not be silenced’, she wrote about gender being a biological classification and, ‘not a feeling’.

The comment piece prompted some 338 Guardian employees to write to editor Kath Viner, complaining about the paper’s ‘pattern of publishing transphobic content’.

Ms Moore, who won the Orwell Foundation’s Journalism Prize in 2019 and has written for the paper for more than 25 years, also revealed she and her children had received death and rape threats.

Her departure comes amid a number of high-profile rows between feminism and transgender lobbies, with Harry Potter author JK Rowling being criticised by earlier this year after she mocked an online article using the words ‘people who menstruate’ instead of ‘women’.

Announcing her resignation on Monday evening, Ms Moore tweeted: ‘I have left The Guardian. I will very much miss SOME of the people there. ‘For now that’s all I can say.’

Suzanne Moore (pictured in 2016), has resigned months after facing a backlash for her column about feminists being abused by trans extremists 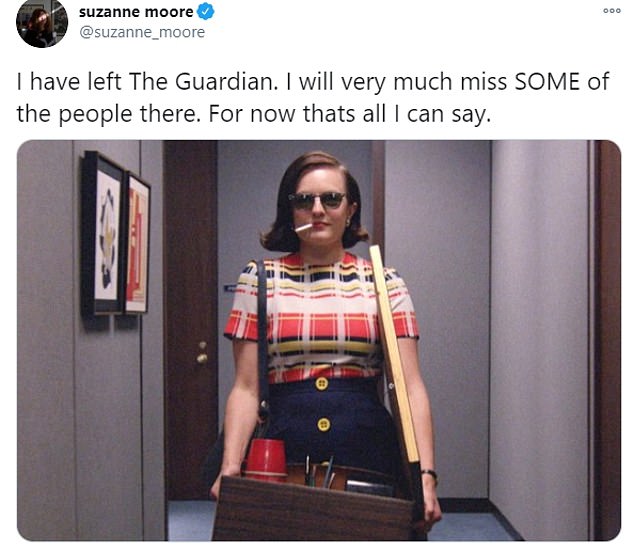 Announcing her resignation on Monday evening, she tweeted: ‘I have left The Guardian. I will very much miss SOME of the people there. ‘For now that’s all I can say.’ 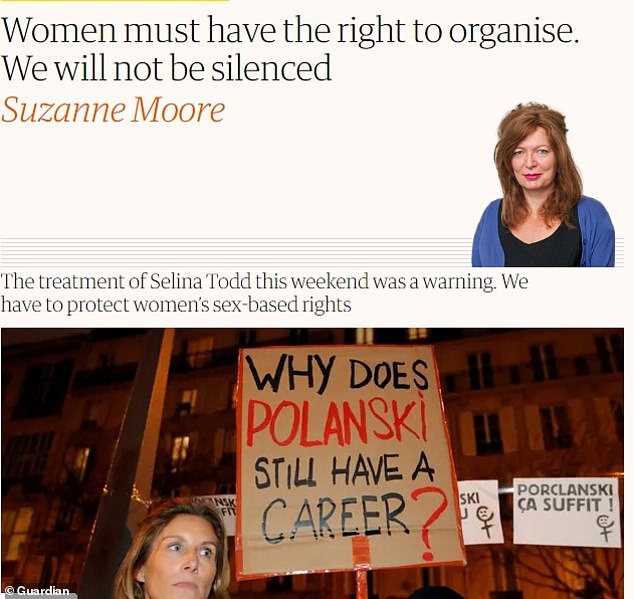 Suzanne Moore was at the centre of a storm in March after publishing this column, ‘Women must have the right to organise. We will not be silenced’

‘Women must have the right to organise. We will not be silenced’: Guardian column which sparked a backlash

Suzanne Moore’s column titled, ‘Women must have the right to organise. We will not be silenced’, was published in the Guardian on March 2 this year.

In it, she addressed how an Oxford historian had been barred from speaking at a feminist history event.

Selina Todd, a professor in Modern History at St Hilda’s College, was provided with security after allegedly making ‘transphobic’ remarks.

Trans-rights campaigners were believed to have taken issue with her ties to the women’s rights group Woman’s Place UK – which some claim to be ‘transphobic’.

She was due to give a two-minute speech at an event at Exeter College but the day before Professor Todd was due to speak, she was ‘no platformed’.

Ms Moore wrote: ‘I feel a huge sadness when I look at the fragmentation of the landscape, where endless fighting, cancellations and no-platformings have obscured our understanding of who the real enemies are.’

Her column concluded: ‘Women have the right to call out the violent men who rape. We have the right to speak and organise without being told that speech is itself dangerous. You can tell me to ‘die in a ditch, terf’ all you like, as many have for years, but I self-identify as a woman who won’t go down quietly.’

She added: ‘It was entirely my choice to go. I will tell you all about it one day . For now thank you for these lovely messages. I feel like I am at my own funeral or something.

‘Anyway I will keep writing of course! The efforts to shut me up seem not to have been very well thought through.’

Journalists Polly Toynbee and Ian Dunt, and the author Giles Paley-Phillips have also expressed their sadness at Ms Moore’ departure.

Ms Moore’s Twitter bio now reads, ‘She left because she understood the value of defiance’.

The staff letter denouncing ‘transphobic content’, which did not name Ms Moore, was leaked to Buzzfeed and Pink News in the wake of her column.

Her column, written on March 2, said: ‘We have gone through the looking-glass and are being told that sex is a construct.

‘It is said that sex is merely assigned at birth, rather than being a material fact – actually, though, sex is recognisable in the womb (which is what enables foetal sex selection).

‘Sex is not a feeling. Female is a biological classification that applies to all living species. If you produce large immobile gametes, you are female.

‘Even if you are a frog. This is not complicated, nor is there a spectrum, although there are small numbers of intersex people who should absolutely be supported.’

She adds: ‘The materiality of having a female body may mean rape or it may mean childbirth – but we still seek liberation from gender.

‘In some transgender ideology, we are told the opposite: gender is material and therefore can be possessed by whoever claims it, and it is sex as a category that is a social construction. Thus, sex-based rights, protected in law, can be done away with.

‘I know from personal experience the consequences of being deemed transphobic by an invisible committee on social media. It has meant death and rape threats for me and my children, and police involvement. I also know that the most vicious stuff takes place online and not in real life. Still, I can’t stand by.

‘Most people want the tiny percentage of the population who are trans to have the best lives they can.

‘Male violence is an issue for women, which is why we want single-sex spaces.’

The debate began after Ms Moore discussed Oxford historian Selina Todd, who was barred from speaking at a feminist history event

In an article for The Spectator on March 14, Ms Moore wrote: ‘A glance at Twitter after my Guardian column went online suggested that either I was the saviour of all ‘natal women’ or had committed some kind of transphobic hate crime.

‘My offence was to say that biological sex is a thing. Scientists tend to think it is.

‘After all the online abuse, I thought someone might ring me and see if I was OK, but they didn’t. But then I never go to the Guardian office. There had been melodrama, apparently.

‘A trans woman who had seemingly resigned some weeks earlier resigned again. My words had made her feel unsafe, she said. More than 300 employees at the paper signed a letter condemning the decision to run my article.

‘I was hurt that so many of my ‘colleagues’ denounced me, but I suppose everyone needs a hobby.’

A Guardian News and Media spokesperson said: ‘We wish Suzanne all the best with her future career and are sorry to see her leave.’