AFL bad boy Jordan De Goey is set to sit down with fed-up Collingwood officials on Monday, with his former coach Nathan Buckley saying the 26-year-old ‘has to take responsibility’ for the scandal caused by his wild Bali partying video.

De Goey, who has made headlines for his off-field antics as much as his often eye-catching playing highlights in his career, is set to fly back from Bali on Sunday.

AFL officials are also monitoring the situation, particularly in regards to the footage in which De Goey attempted to expose the breast of his friend Remy Jackson, who was lying on a bar.

The Collingwood forward has a long list of off-field indiscretions – the most recent of which involved him spending a night in jail after a New York bar fight – and pressure continues to mount on the club to clamp down on his bad behaviour.

A club-imposed sanction will be discussed in the meeting, with many Magpies officials and board members reportedly sick of his bad behaviour.

It comes as Buckley raised concerns about why De Goey would put himself in this position yet again. 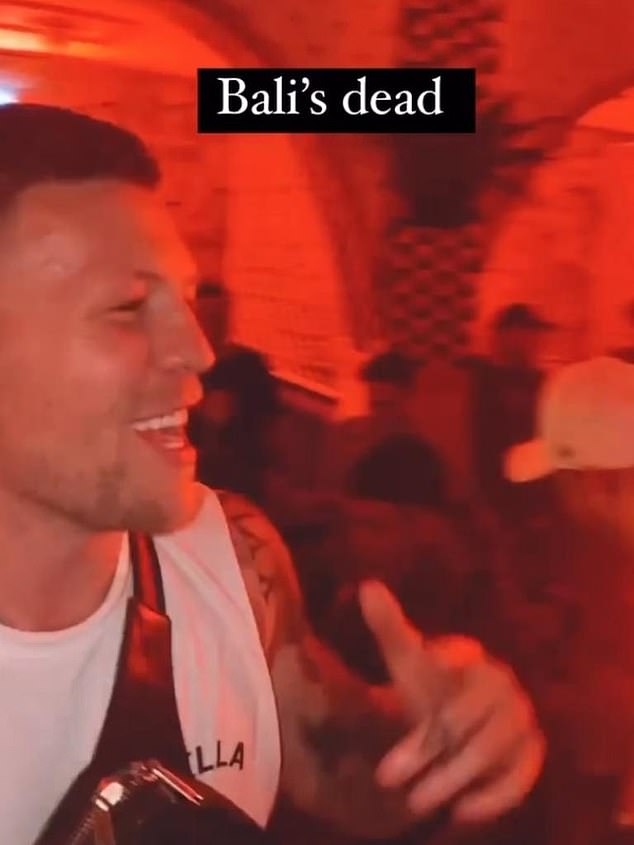 ‘I don’t think it was a good decision to go to Bali,’ he said on Fox Footy.

‘I know that the club has been criticised for that but you don’t hold your players hands like they’re pre-school kids, you have got to treat them like adults when they are adults. 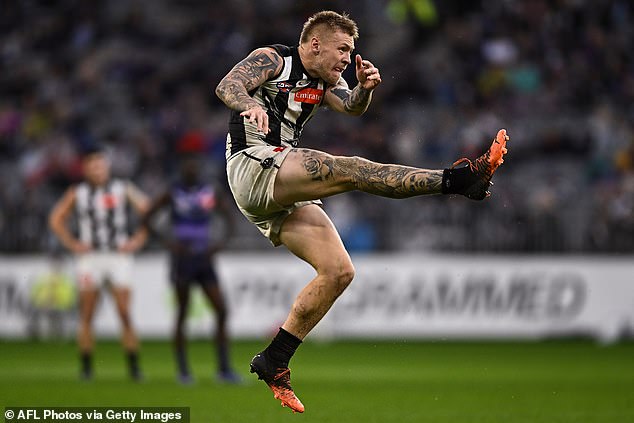 De Goey has been in solid form for Collingwood this season, kicking 12 goals

Collingwood players were given 12 days off over the bye round, and the club was aware of De Goey’s intention to go to Bali.

Three-time premiership player Cameron Mooney laid the blame squarely at the feet of the club.

‘I am staggered that the club let him go. Whatever happens from here, Collingwood, it’s on you. It’s the stupidest decision I’ve ever seen a football club make,’ he said. 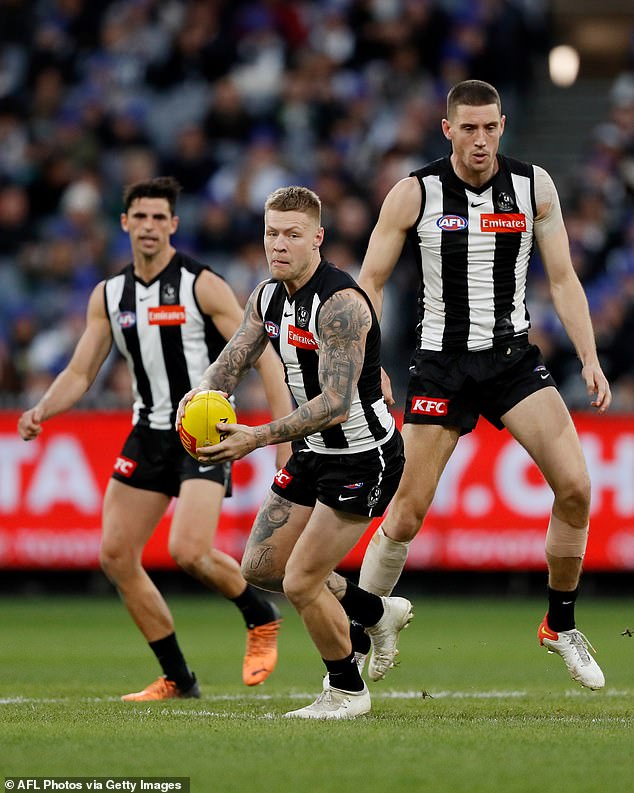 Remy Jackson took to Instagram to defend De Goey to her 17,400 followers, a number that has increased by more than 2000 over the last couple of days.

‘Hey everyone, I can’t believe the backlash towards Jordy & Myself over here in Bali… nothing to see here,’ she wrote on her story. 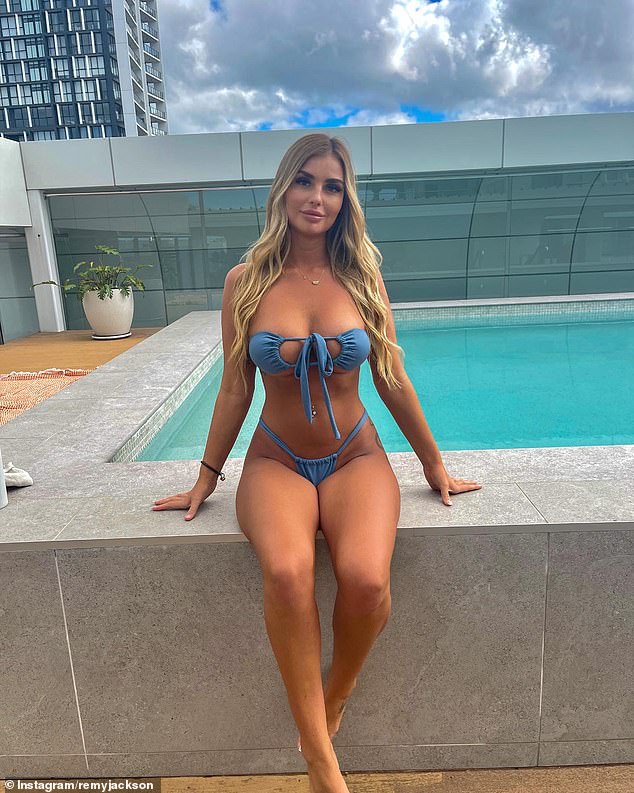 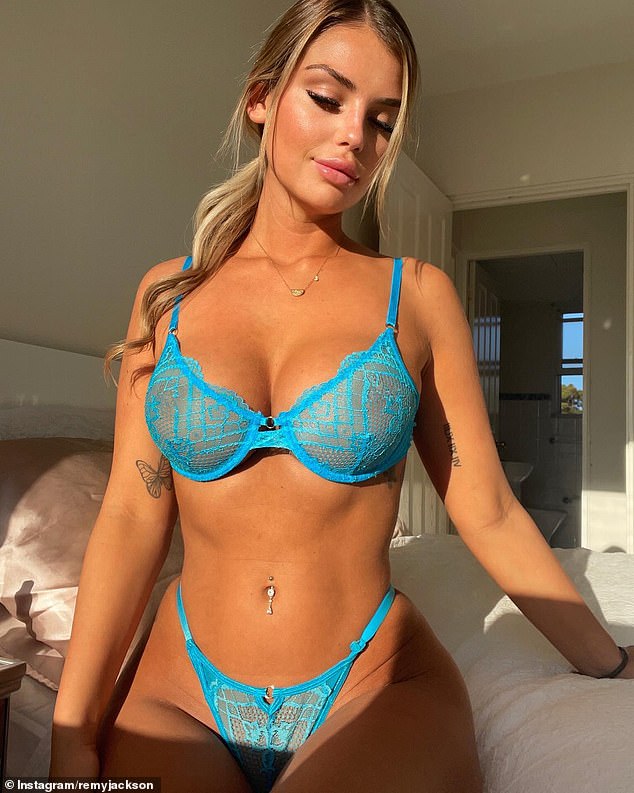 De Goey also had a response of his own on Instagram, slamming the media’s ‘relentless persecution’ of athletes like him.

‘I want to take the opportunity to thank my family, friends and supporters who have checked in or sent messages of support in the past 24 hours,’ he wrote.

‘I want to openly address the relentless pursuit and persecution of athletes by the media to create an uneducated, bias and ill-informed narrative that has gone too far.

‘I am one of the lucky ones with amazing support, however not all athletes are so lucky. This will end in tragedy if no one speaks up. It’s time for change.’ 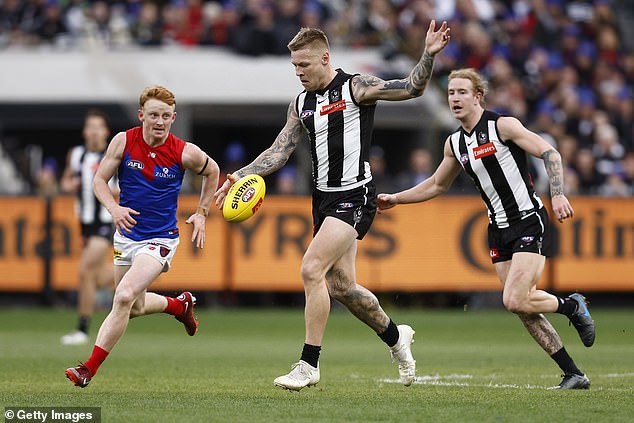 It is understood Collingwood weren’t aware of his desire to make a statement beforehand.

De Goey is in the last year of a contract, and was set to command a monster, multi-year contract worth at least $800,000 on the free agency market.

Collingwood CEO Mark Anderson said as recently as two weeks ago the club was confident of retaining De Goey before the restricted free agent hits the market.

‘He’s had a great year on-field and he’s tracking really well off it as well,’ he said on AFL Nation. 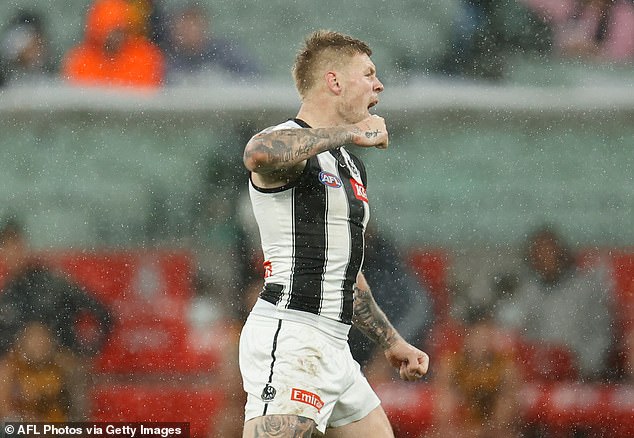 De Goey celebrates a goal against Hawthorn in Round 12

The latter part of that comment is clearly up in dust now, and whether Collingwood, or another club, will take such an expensive punt on De Goey remains to be seen.

The incident certainly won’t have added any zeroes to his contract either way, and any of the goodwill he built up after his drunken antics in New York during the preseason has been erorded.

More reports emerged about the timeline of events during De Goey’s Bali stay by the Herald Sun.

De Goey then trained with local AFL team the Bali Geckos the next day before taking part in some workouts the following day.

With some exercise ticked off, the next day De Goey and his party headed to famed VIP club Finns to drink shots and cocktails by the pool during the day before heading to Motel Mexicola.

This was where the situation unraveled, and the now-deleted videos emerged from a club famous for its bottomless margaritas.

De Goey was filmed making vulgar, sexual gestures to the camera before attempting to expose Jackson’s breast as she was lying on a bar. The blonde appeared to try and bat his hand away.

It has been far from the peaceful getaway Collingwood would have hoped for.

Given a three-match suspension and fined $5000 by Collingwood after lying to the club about a broken hand. De Goey originally told the club he broke his hand playing with his dog, when in reality he broke it during a bar fight in St Kilda.

Charged with drink-driving after being stopped by police. De Goey blew .095, twice the legal limit, in Port Melbourne and was suspended and fined $10,000 by Collingwood.

Victoria Police charged De Goey with indecent assault in relation to an incident in Kew in 2015. The charges were later dropped in 2021.

De Goey was fined $2075 after pleading guilty to seven road offences, which included speeding, using his mobile phone while driving, driving while suspended and not displaying P-plates.

De Goey spent a night in a US jail, after being arrested and charged with forcible touching after an incident in a New York nightclub. Those charges were later dropped, but De Goey was also charged with harrassment and assault after allegedly punching a kicking a man in the same nightclub.

After the New York incident, De Goey pleaded guilty to the harassment charge and was ordered to undergo anger and alcohol counselling by the court. He was fined $10,000 by the AFL for conduct unbecoming and also did work with the Salvation Army.

De Goey is facing club-imposed sanctions after a series of videos emerged on social media of the Collingwood player partying in Bali during a bye round. He was filmed making lewd gestures and attempting to expose his friend Remy Jackson’s breast.