The air is a bone chilling inside a new Brooklyn museum where 110 human spines hang on the wall, full skeletons stand tall from the floor and more than 90 skulls are in a display case for everyone and anyone to see starting next month.

While the sight of human remains may invoke thoughts of serial killers, Jon Pichaya Ferry is using his large collection to educate people about the stigmatized bone trade market.

Ferry, 22, told DailyMail.com that there are hundreds of thousands of human skeletons in the US that were used for medical purposes, but now they are collecting dust in attics because people do not know what to do with them – and he created his company JonsBones as a solution.

‘People feel stuck with the bones, because schools will not take them and it is illegal to improperly dispose of them,’ Ferry said.

‘JonsBones provides a service to them. Every single piece we have in the showroom comes from individuals who inherited them from a family member who was once in the medical field.’ 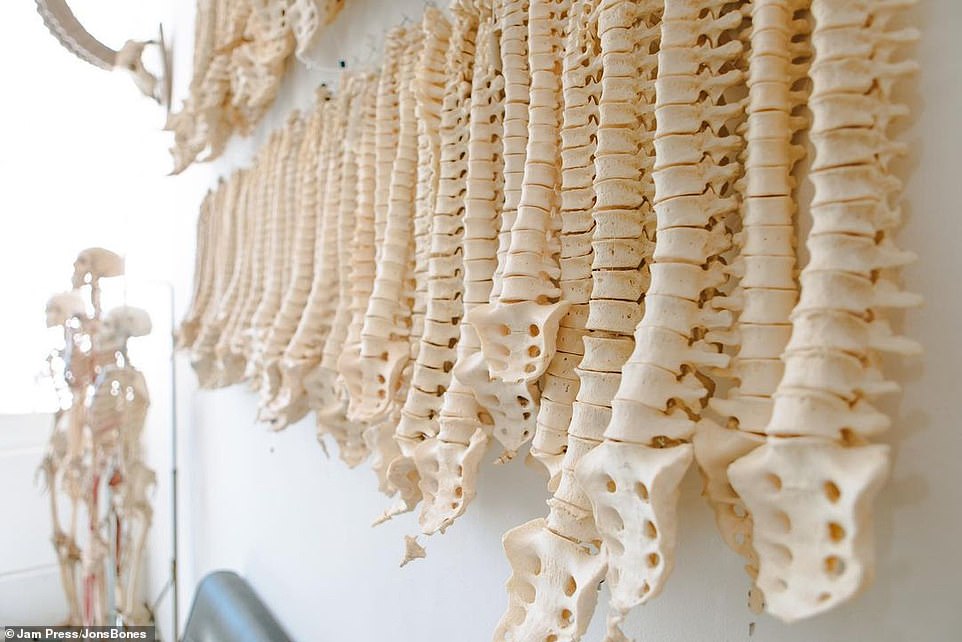 The museum features a wall filled with 110 human spines. All of the bones were once used for medical or educational purposes and are legal to own. Many of the remains were owned by doctors and professors in the 1950s who have since passed and left the bones to their next of kin

The collection, worth about $500,000, is sprawled out in a 175-square-foot space in the center of a trendy Bushwick neighborhood and while visitors can feast their eyes on the remains, they will also learn about the history of how the bone trade came about during the one-hour tour.

The bone trade’s humble beginnings date back to the 18th century in the United Kingdom when a group of body snatchers called the Resurrectionist stole human remains for medical schools.

In the United States, people were stealing the remains of Native Americans to turn a profit.

News about these nightly robberies began to spread, forcing governments to step in and create regulations against such acts. 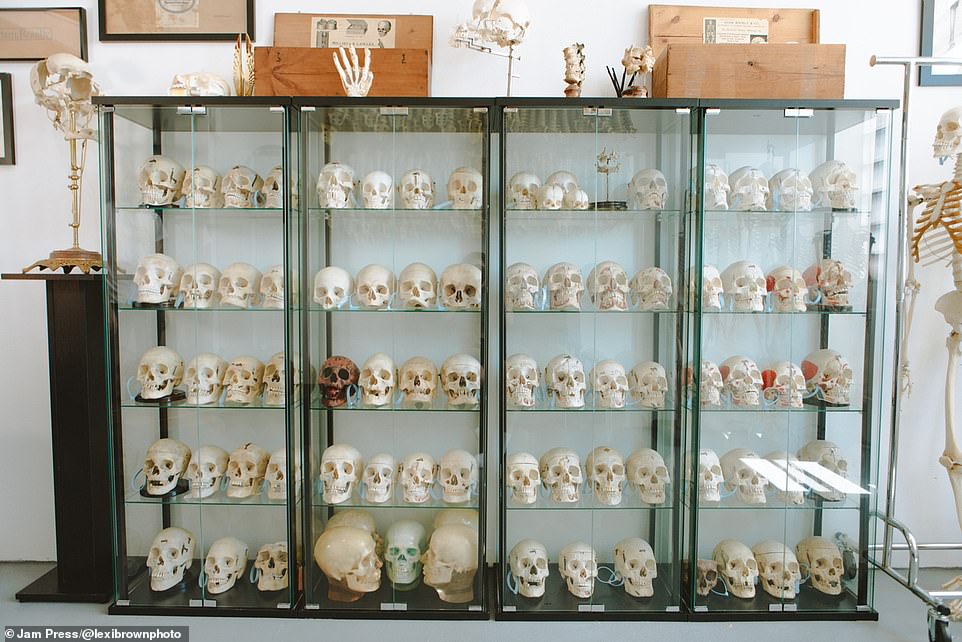 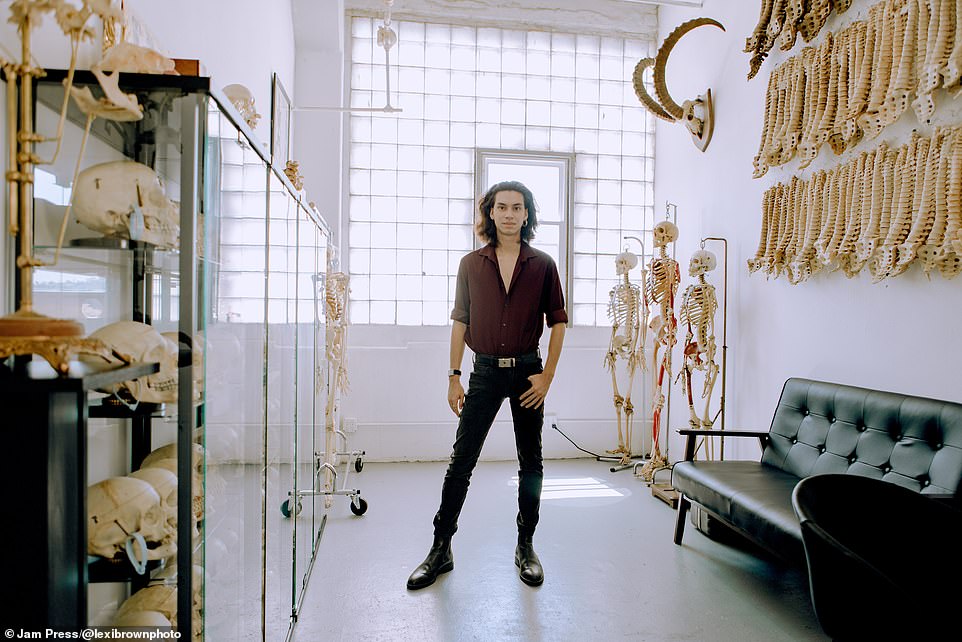 Ferry told DailyMail.com that there are hundreds of thousands of human skeletons in the US that were used for medical purposes, but now they are collecting dust in attics because people do not know what to do with them – and he created his company JonsBones as a solution

The bones were then purchased in the US from China and India.

‘People do not realize the scale and volume and even though a lot of these institutions have moved away [from purchasing human bones], the bones still exist.’

The outsourcing stopped once ‘medical companies began to spring up to fuel this demand,’ Ferry continued.

‘There were 14 major bone companies that supplied the entire world trade, but only four or five are still in business.’

And this is where JonsBones comes in. 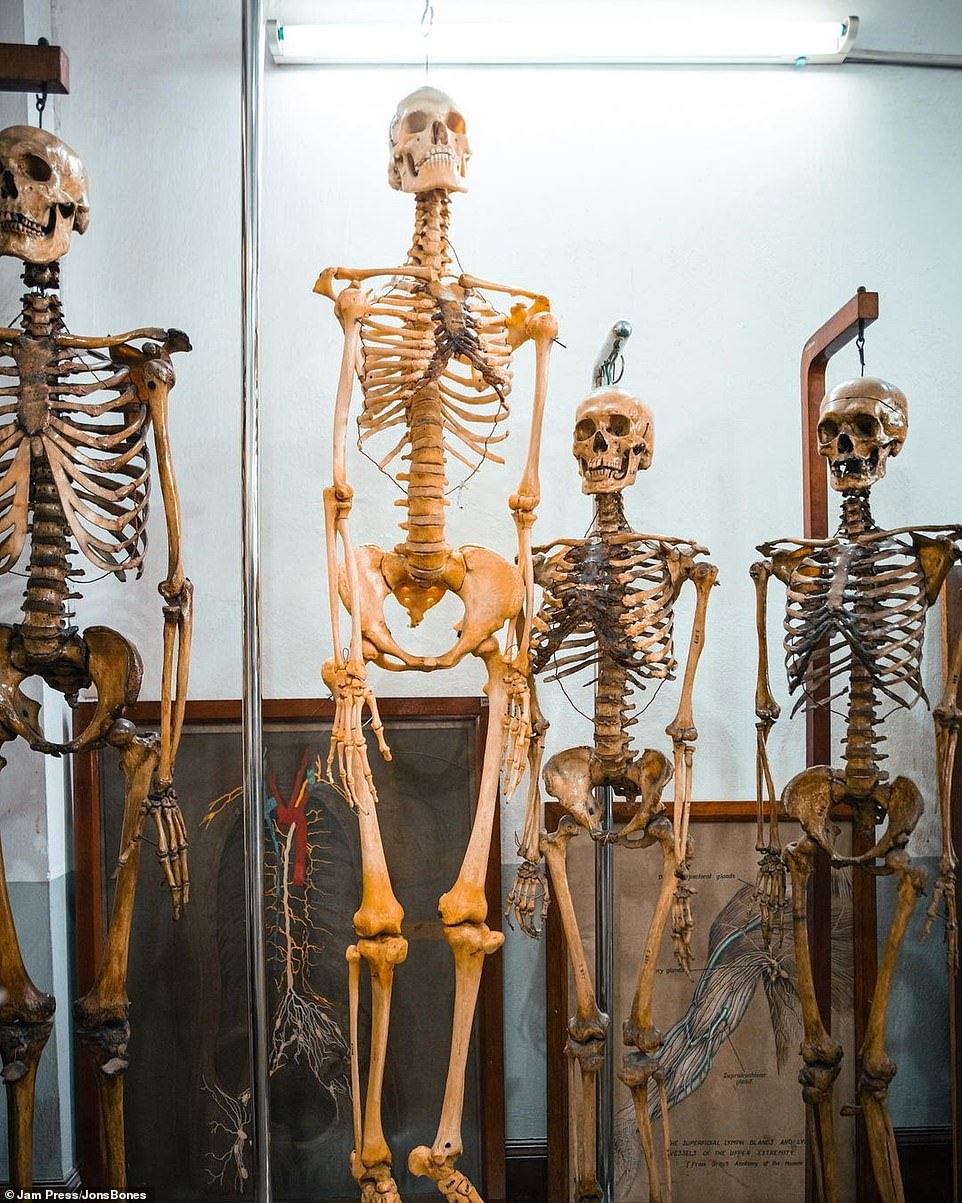 Many of the skeletons in the museum were sitting in people’s attics because they were passed down from a family member and the new owners did not know what to do with them. Ferry offers these individuals a place to get rid of the remains that can eventually be used by education institutions 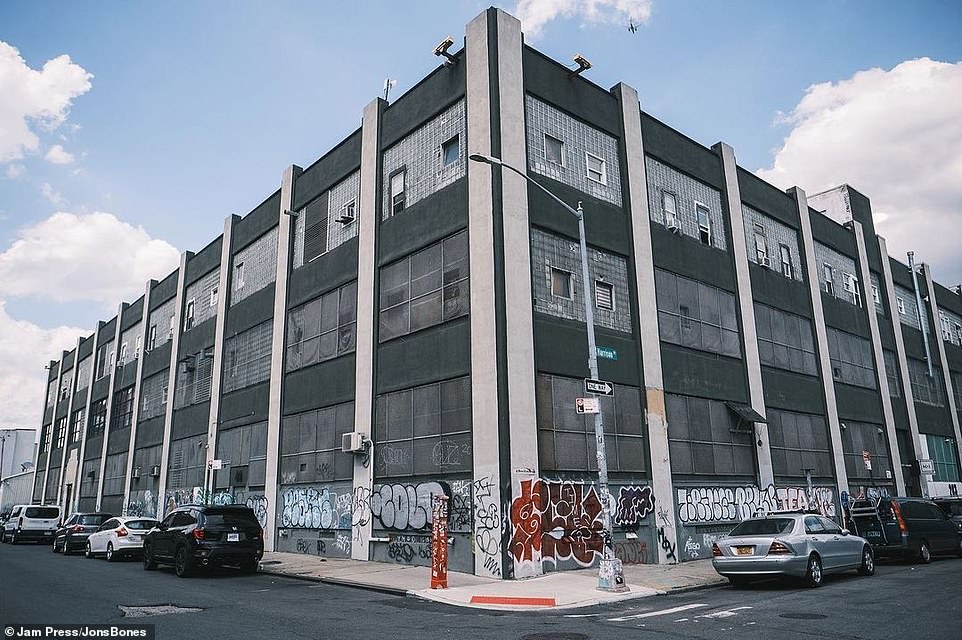 The collection, worth about $500,000, is sprawled out in a 175-square-foot space in the center of a trendy Bushwick neighborhood. Pictured is the location at 44 Stewart Avenue

The JonsBones website says it sells ‘responsibly sourced human osteology’ and its  mission is to ‘destigmatize a stigmatized industry.’

Ferry focuses only on bones that show indication of medical use – nothing archaeological, he told DailyMail.com.

At JonsBones, the remains are photographed, curated, documented and preserved ‘so future generations can learn.’ 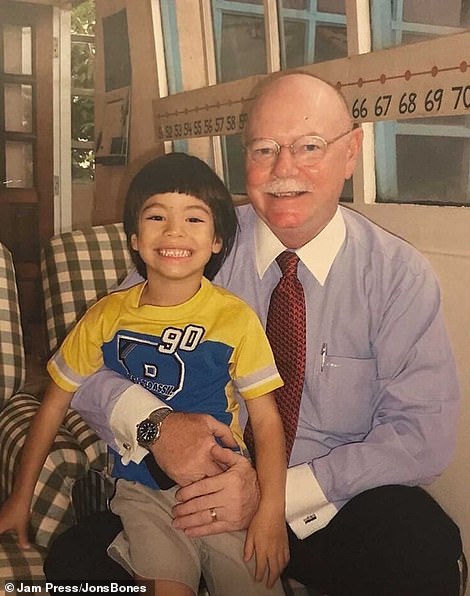 Ferry, who is a full-time student studying product design at Parsons, discovered his love for bones when he was just 13 years old and his father gave him a mouse skeleton. Pictured is Ferry as a young boy with his father

Ferry said his collection services institutions that may need a skeleton or two – which can sell for at least $6,000 each.

The bones for sale also include femurs, skulls, spines and whatever loose remains Ferry has at the moment.

‘These bones are not decoration, not vanity and not used as a gimmick, but they are used for education and learning,’ he said.

‘We get these pieces back in the hands that can benefit from them.’

Ferry, who is a full-time student studying product design at Parsons School of Design in New York, discovered his love for bones when he was just 13 years old and his father gave him a mouse skeleton.

‘I wanted to study osteology, but I was not able to get access to bones in the state I was in,’ he said.

This led him to realize that there are human bones in people’s homes and they do not know what to do with them.

These bones were largely from the 1950s and 1960s, when medical students were required to purchase the remains for classes.

Decades later, these individuals have passed and now their next of kin are the new owners of the bones – and many are afraid about the legalities of owning and disposing of them.

Ferry said he has received thousands of emails from people who have skeletons sitting in their closets and who are terrified of getting in trouble for it.

He continued to explain that his product design degree lets him take a different methodology on identifying skeletons.

‘I look at it from a design standpoint, how it was made,’ Ferry said. ‘I can determine where it came from by looking at joint pins.

Such as, brass and copper were used from 1920 to 1960 and then people switched to brass. 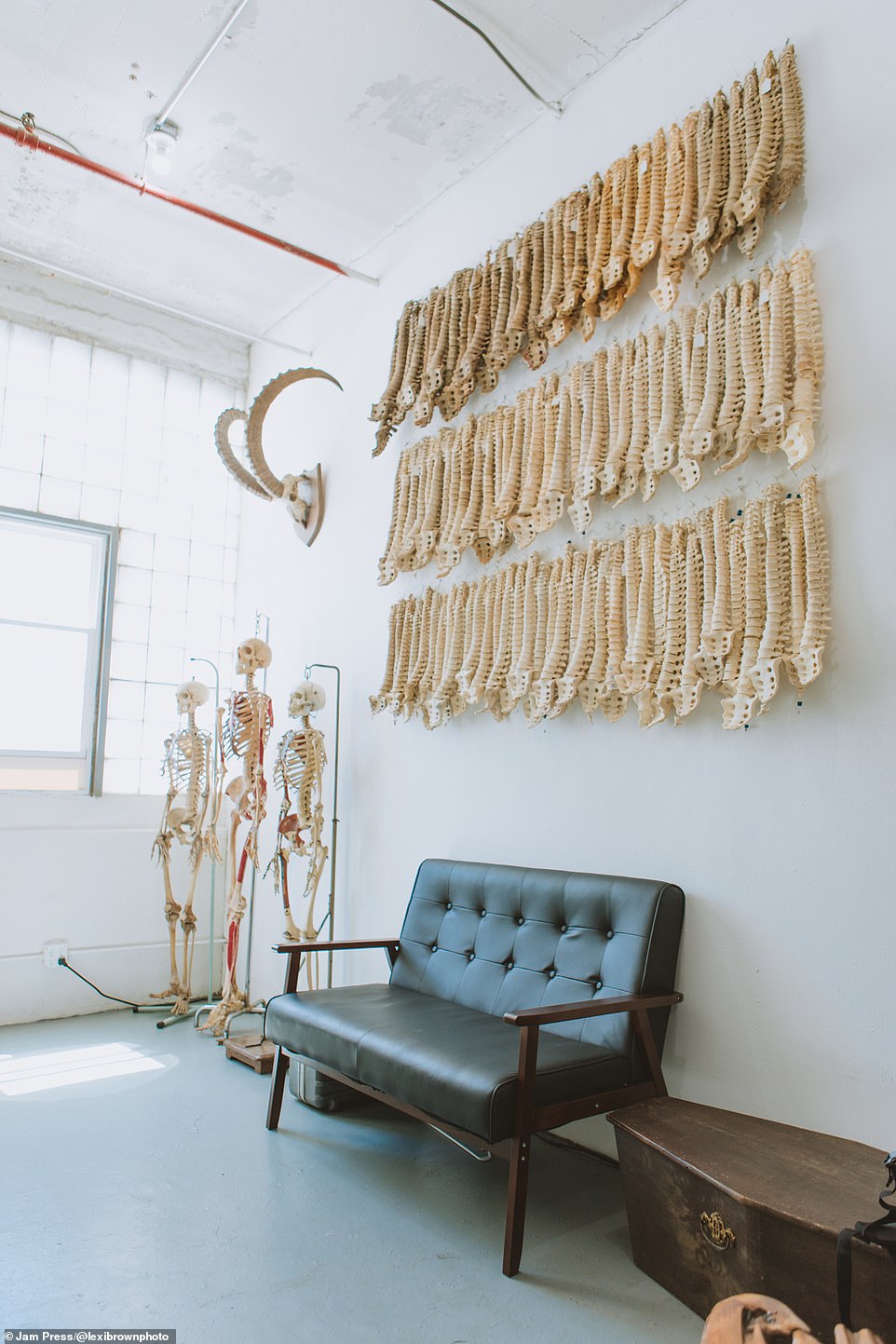 These little details, according to Ferry, helps him uncover how the remains were prepared, helping him to identify where they came from.

The Brooklyn museum, which will officially open its doors next month, showcases a total of nine full skeletons, more than 90 skulls and a wall of 110 human spines, along with thousands of loose bones.

‘I have always preached open accessibility and transparency,’ said Ferry, who continued to explain that the museum allows for people to ask questions and air out their opinions about the bone trade.

‘People of western cultures have romanticized true crime theories that exist,’ he said.

‘When people see bones their minds jump to pop culture and not from a scientific or educational standpoint, and we want to have a conversation about it.’

While Ferry’s business is legal, there are many in the US that are not – and most of them are opening up shops on social media.

In 2020, Facebook opened an investigation into several private groups that were selling and soliciting human remains, including skulls, fetal remains and even a mummified six-year-old child dated to the 1700s.

While Facebook has a policy that explicitly bans the ‘buying or selling of human body parts or fluids,’ some users found a workaround by taking advantage of the site’s private groups feature.

One seller listed a human skull for $1,300, claiming it had come from a ‘young teen female,’ but offered no other information on its origin.

And a separate listing described an elongated skull claimed to have come from Peru, on sale for $10,500.

There are no federal laws in the US that prevent individuals from owning, buying or selling human remains, unless the remains are Native American.