A huge drugs ‘super-cartel’ that controlled a third of Europe’s cocaine trade has been busted by police officers, with 49 arrests in countries including France and Dubai.

The ‘historic’ international operation seized £21.7 million worth of assets, including 30 tonnes of cocaine and the gang’s supercars, luxury villas and piles of cash.

Spanish police said the leader of the organisation is a ‘British national’ who fled his former base on the Costa del Sol for Dubai, where the Kinahan organised crime group are based, after a kidnap attempt. He was later arrested in Dubai.

Another British man was arrested on the Costa del Sol, a Spanish police source said, as officers raided a series of villas in Marbella, Madrid and Barcelona.

A huge drugs ‘super-cartel’ that controlled a third of Europe’s cocaine trade has been busted by police officers, with 49 people arrested in various countries including France and Dubai. Pictured: Spanish Civil Guard police officers raid a mansion in Spain 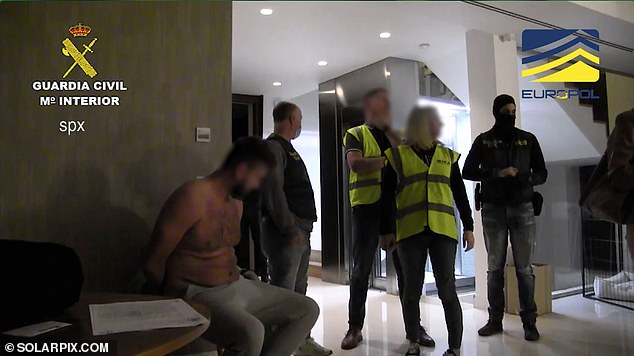 The international effort also involved arrests in France, Spain, Belgium and the Netherlands, the EU’s police agency said in a statement. Pictured: Police arrest a suspect in Spain 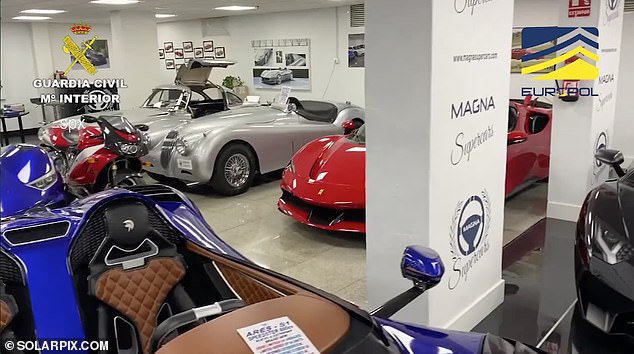 The huge international operation seized 30 tonnes of cocaine, as well as the gang’s supercars, luxury villas and piles of cash in the ‘historic’ raids

The international effort also involved arrests in France, Spain, Belgium and the Netherlands, the EU’s police agency said in a statement.

‘The drugpins considered as high-value targets by Europol had come together to form what was known as a ‘super cartel’ which controlled around one third of the cocaine trade in Europe,’ the EU’s law enforcement agency Europol said.

‘The scale of cocaine importation into Europe under the suspects’ control and command was massive and over 30 tonnes of drugs were seized by law enforcement over the course of the investigations.’

Europol said Dubai had arrested two ‘high-value’ suspects who are linked to the Netherlands, another two linked to Spain and two more connected to France.

The agency said the crackdown in Dubai netted a ‘big fish’ from the Netherlands, who reportedly had links to alleged Dutch crime boss Ridouan Taghi, himself seized in the Gulf emirate in 2019.

‘He was just as important as Taghi, if not more important,’ a Europol source said, referring to the Dutch suspect.

The suspect, who has not been named, had allegedly formed an alliance in Dubai with the leaders of Irish and Italian drug gangs who had also been arrested, Dutch public broadcaster NOS said.

The Spanish police said more than 500,000 euros (£433,000) was confiscated during a raid on a series of luxury villas in Spain, along with three weapons, high-end cars and luxury watches. 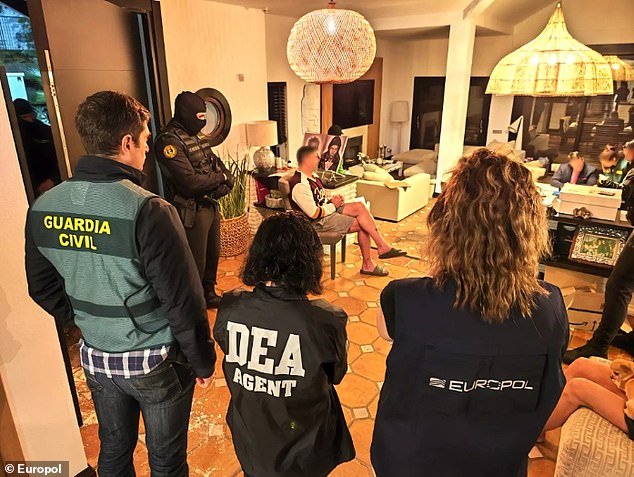 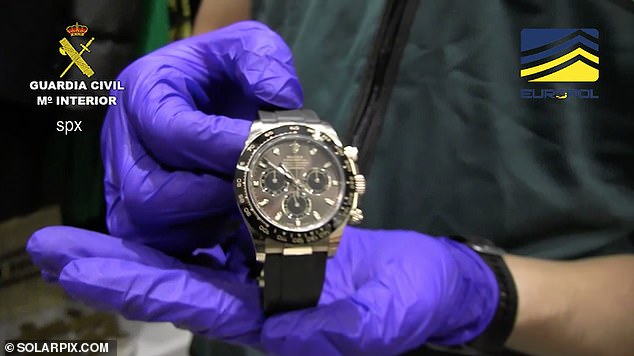 The Spanish police said more than 500,000 euros (£433,000) was confiscated during the raid, along with three weapons, high-end cars and luxury watches 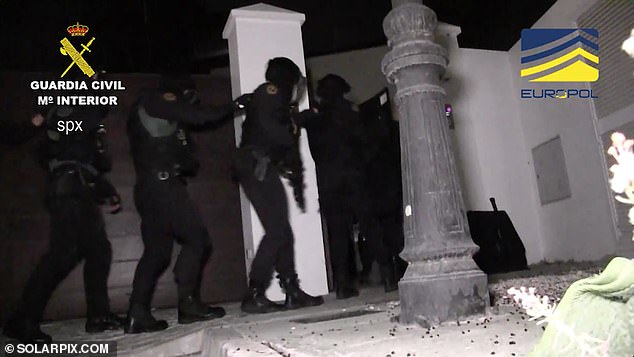 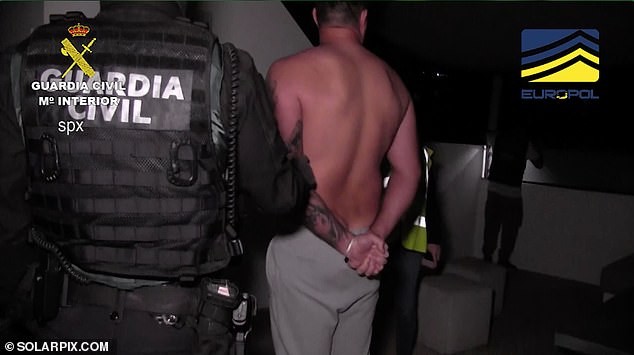 The cocaine trade has enjoyed an unprecedented boom in the past few years – and this is in part due to soaring production levels.

In 2018, Colombia, Bolivia and Peru – the main producers of cocaine – produced double the amount of cocaine that they did five years earlier in 2013.

Drug traffickers transport the cocaine to Europe by sea and air – and in the last decade, they have often opted for the sea routes, focusing mainly on container trafficking.

The traffickers are constantly changing their methods to hide cocaine among the millions of containers that reach Europe each year.

This has meant hundreds of tonnes of cocaine have reached Europe in recent years.

The availability of cocaine in Europe has never been higher, with extremely high purity and low prices.

Trafficking cocaine in Europe is becoming more attractive to drug gangs compared to the United States – in part due to the risks of extradition and the seizure of assets being lower.

But international drugs busts have seen record amounts of cocaine being seized by the police.

More than 214 tons of cocaine were seized in the region in 2020, a 6 per cent increase from the previous year, and experts from the European Monitoring Center for Drugs and Drug Addiction believe that amount could reach 330 tons in 2022.

The range of criminal organisations involved in the trafficking of cocaine is now ‘wider than ever’.

Drug gangs now subcontract out much of their work – so as to make it more difficult for police to find the leaders.

They hire people for the transport of cocaine, assassins for hire, as well as money laundering.

A video released by Europol showed agents, including some from the US Drug Enforcement Administration and Spanish Guardia Civil, arresting suspects and seizing luxury cars and hidden stashes of cash.

The heavily-armed officers were seen forcing their way into the villas before making the arrests.

The arrests from November 8 to 19 were the latest in a series around Europe that followed a police hack of sophisticated encrypted telephones used by organised crime networks last year, Europol said.

Police secretly used the SKY ECC phone platform to listen in on what were supposed to be secure communications between drug traffickers.

Most of the drugs targeted cocaine coming from South America through the ports of Rotterdam and Antwerp, although some had passed through South Africa.

In Spain, the Civil Guard said their operation, dubbed Operation Faukas, had begun with the seizure of 700 kilos of cocaine in the port of Valencia in March 2020.

A spokesman for the Spanish force said: ‘During the investigation, officers discovered a criminal organisation was smuggling containers with cocaine inside through the ports of Barcelona, Valencia and Algeciras.

‘They also established that a complex real estate business had been organised on the Costa del Sol to launder the proceeds of the profits obtained from the drug-smuggling.

‘The leader of this organisation was identified as a British man linked to the Costa del Sol who had to leave Spain and move to Dubai after he was the subject of a kidnap attempt.

‘From Dubai he continued to direct and coordinate the organisation’s criminal activities, while at the same time maintaining drug-trafficking contacts and business interests with the rest of the drug lords based in this emirate city.’

The Kinahan organised crime group are based in Dubai, but it is not clear if the group is linked to these raids.

Spanish police are calling the operation, coordinated by Europol as part of an international operation codenamed Desert Light, ‘historic’.

The Spanish Civil Guard spokesman added: ‘With this international effort by all the agencies involved, a firm message is being sent to criminal organisations, in the sense that no place is safe for those who try to avoid justice.’

They continued: ‘From Dubai the leaders of this mega cartel controlled and directed the criminal activities of the different cells with the conviction that they were living in a sanctuary where they felt untouchable.’

The Civil Guard say three of the suspects held as part of Operation Faukas, the Spanish end of the Desert Light operation, are considered high-value targets by Europol.

It was not immediately clear this morning how many British nationals were among the 49 people held. 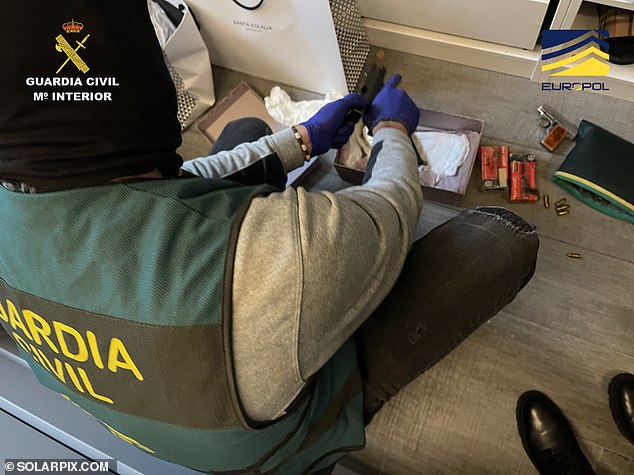 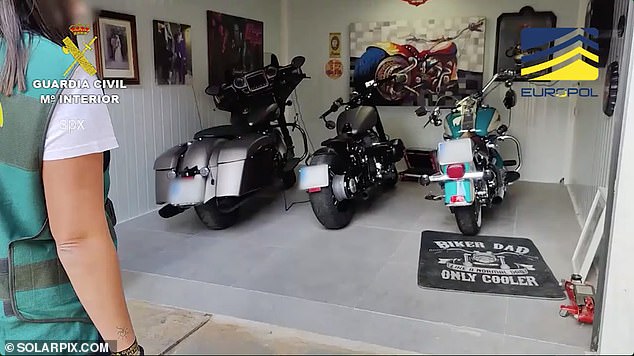 The Civil Guard say three of the suspects held as part of Operation Faukas, the Spanish end of the Desert Light Operation, are considered high-value targets by Europol. Pictured: Motorbikes at the properties in Spain 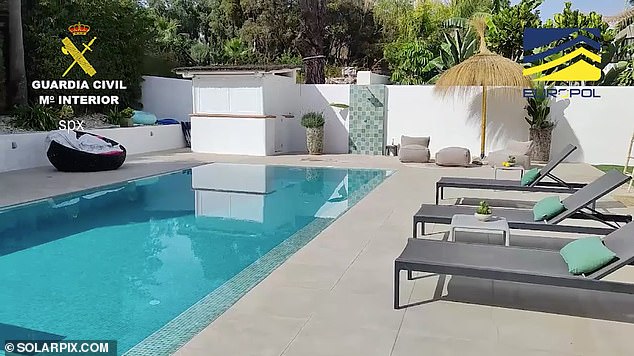 In Spain, the Civil Guard said their operation, dubbed Operation Faukas, had begun with the seizure of 700 kilos of cocaine in the port of Valencia in March 2020

One of the detainees in Dubai is thought to be a Panamanian national who was supplying the cocaine.

A spokesman said: ‘He is allegedly responsible for the introduction of the drugs in the Port of Manzanillo in Panama who also had links with the rest of the drug barons in Dubai.

‘The criminal organisation based in Spain had two differentiated structures, the part tasked with the extraction of the drugs in maritime ports and the other responsible for laundering money through real estate firms.

‘The first part was situated between the provinces of Barcelona and Malaga and had a direct influence on Barcelona Port.

‘It consisted of two Bulgarians, one of whom was a high-value target for Europol, and three people of Spanish origin including a Barcelona port worker who was responsible for the entry and exit of vehicles.

‘The other part was composed of people who were trusted by the main leader of the criminal organisation.

‘It was based on the Costa del Sol, the nerve centre for its financial activities where they had bought property valued at more than 24million euros (£20million) and laundered their drugs money.’

Dutch prosecutors said they would request the extradition of the two suspects from the United Arab Emirates.

One was a 40-year-old dual Dutch-Bosnian national, suspected of smuggling 1.8 tonnes of cocaine via the German port of Hamburg in 2020, and of preparing to import 8 tonnes of raw materials for producing amphetamines via Antwerp in Belgium.

Dutch media named him as Edin G. and said he was wanted by the US DEA for his links to alleged drug kingpin Ridouan Taghi.

Moroccan-born Taghi was arrested in Dubai in 2019. He is now on trial in the Netherlands on charges of murder and running a huge Amsterdam-based cocaine smuggling group.

The other suspect is a 37-year-old dual Dutch and Moroccan national, whom Dutch media named as Zouhair B. and said had allegedly smuggled three tonnes of cocaine to the Netherlands worth more than 200 million euros.

He was also suspected of money laundering and firearms possession.

The investigation into both men was launched on the basis of decrypted messages from SKY phones, the Dutch prosecution service said in a statement.

‘These are serious criminal offences pertaining to international drug trafficking, mainly from South America via the ports of Antwerp and Rotterdam,’ it said.