A cobbler who lost his thumb in an accident at work had his big toe sewn onto his hand to replace it.

David Lee, of Mansfield, Nottinghamshire, was trimming the heel of a shoe in his shop when his thumb got caught in the machine and he watched his severed thumb drop onto the floor.

He managed to free himself from the machinery but he says his first thought was about how he would be able to earn a living after the accident.

Cobbler David Lee has now been able to return to work as a cobbler after his accident. Surgeons spent around 10 hours completing the procedure, which is only considered for patients with certain types of amputations

He said: ‘Straight away, I knew how bad it was and I just worried that I wouldn’t be able to fix shoes again. I cried my eyes out when I thought about it, as I thought I was going to lose my shop.

‘I was more concerned about that than my thumb because this is my passion.

It all happened so fast but I felt no pain at all and straight away just turned all the machines off and actually went outside for a fag, while I waited for the ambulance!’

Cobbler Mr Lee went to hospital but was referred to the Pulvertaft Hand Centre, at Royal Derby Hospital, where the idea was put to him that a new ‘thumb’ could be created using one of his big toes. 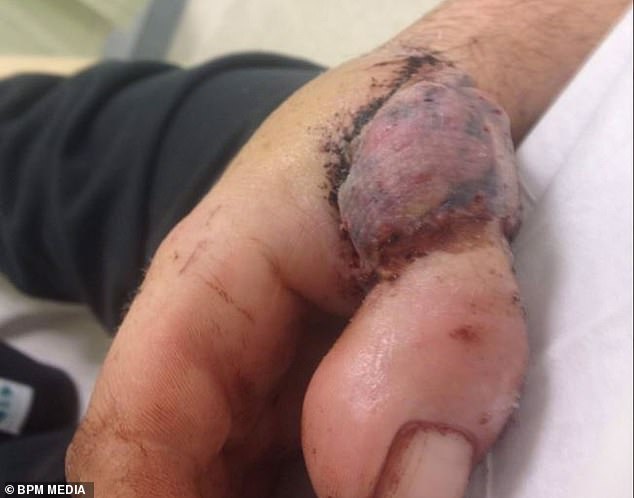 Mr Lee was trimming the heel of a shoe in his shop when his thumb got caught in the machine and he watched his severed thumb drop onto the floor. His toe is pictured above sewn on to his thumb

‘As soon as it was put to me that attaching my toe gave me a chance to carry on my job, I instantly said let’s do it. I’d never heard of a procedure like this before but I also knew that the Royal Derby Hospital had the best hand surgical team in the country.’

Five days on from the accident, surgeons spent around 10 hours completing the complex procedure. which is only considered for patients with certain types of amputations.

Miss Jill Arrowsmith, one of the two consultant hand surgeons who performed the operation, said: ‘This procedure is only offered to patients who have lost a lot of their thumb, usually down to close to the knuckle.

‘Not having any of the thumb can be very disabling, especially for those who do a manual job. This type of injury could mean that these patients are not able to remain at work, so we’re delighted to be able to provide this treatment option. 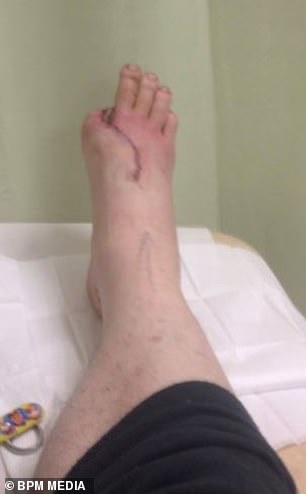 Mr Lee went to hospital but was referred to the Pulvertaft Hand Centre, at Royal Derby Hospital, where the idea was put to him that a new ‘thumb’ could be created using one of his big toes. His amputation is pictured above

‘Toe-to-thumb reconstructions are quite rare but we have been really pleased with all of the outcomes these patients have achieved. There are lots of different ways to reconstruct thumbs but using the big toe gives the best functional and cosmetic benefits, as it is the thing most like a thumb on the body.

‘David has worked really hard to recover after his injury and has done amazingly well. He’s the first master cobbler I’ve ever met, so it’s really nice to hear that he’s back doing what he loves to do.’

It’s now been just over a year since David’s accident on January 9, 2019, with the specialist team at the Pulvertaft Hand Centre helping him undergo months of rehabilitation to increase his grip strength and get back to normal.

The cobbler has now returned to his trade.

He added: ‘Thank you feels too small to say because what the hospital has done has really meant the world to me. I’m doing what I love again and the team have given me the opportunity to do that.

‘I really appreciate them because, if not for them, I wouldn’t have been able to get to where I am today.’