EXPRESS INFORMER > News & Politics > Coach driver, 27, who smashed into central reservation because he was DANCING is banned from road

Coach driver, 27, who smashed into central reservation on dual carriageway before plunging into a ditch because he was DANCING at the wheel is banned from the road for two years

A coach driver who smashed into the central reservation of a dual carriageway whilst dancing behind the wheel has been handed a two-year driving ban.

Kieron Jury, 27, was driving the Laguna coach near Bournemouth in Dorset when he turned his attention away from the road to have a spontaneous boogie.

The vehicle, which was travelling on the A338 dual carriageway, careered into the central reservation before rebounding into a ditch, causing thousands of pounds of damage.

Jury, from Bournemouth, was returning from a trip to Gatwick Airport with no passengers on board when the incident took place on March 15 last year.

Kieron Jury, 27, was driving the Laguna coach near Bournemouth in Dorset when became distracted whilst having a spontaneous boogie whilst driving

Prior to the crash he was also seen tossing litter out onto the road by the coach’s internal CCTV.

He has now appeared at Poole Magistrates Court where he admitted to one charge of dangerous driving and another of throwing litter.

The court heard that Jury was travelling at such a speed that the passenger of a car on the other side of the highway thought he would smash through the central reservation and into them.

Charles Nightingale, prosecuting, told the court: ‘He was in Hampshire travelling along the A31 to the slip road junction of Ashley Heath roundabout at a time just short of 6pm in the evening.

‘His behaviour as he was travelling along the A31 became increasingly bizarre. 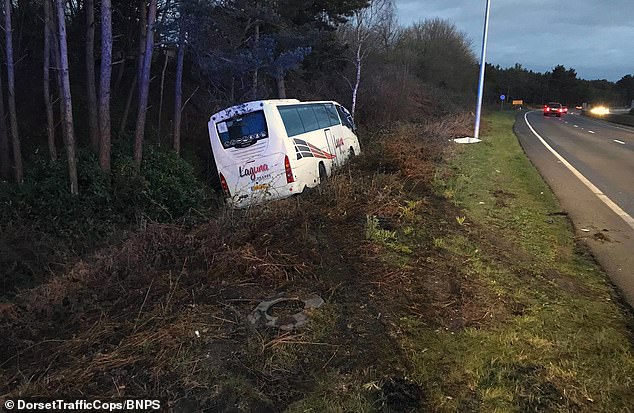 ‘He was throwing litter out the window, but internal CCTV shows him dancing on the driver’s seat, at times not having any control over the vehicle and travelling at speed.

‘It is impossible to say the speed when the vehicle was going round the corner.’

Jury, apart from a caution for possession of ecstasy, had no previous convictions, and had been working as a stay-at-home dad since the incident.

Leah Dillon, mitigating, said: ‘At the time of the incident, this young man was suffering from undiagnosed ADHD.

‘He was so remorseful and in fear of why he was behaving like this.

‘He has accessed the relevant agencies to help him. He his on medication and his long-term partner is extremely supportive.’

Jury, who is no longer employed by Laguna, was given a community order for 12 months, ordered to complete 35 rehabilitation activity requirement days, given an electronic tag keeping him inside between 8pm and 6am for three months.

He was also banned from driving for two years and ordered to pay a victim surcharge of £95 and costs of £85.