British supermarket group the Co-op has warned that further disruption to the country’s supply chain could hit full-year profits as it revealed it swung to a first-half loss.

The retail company, which is owned by its members and also provides funeral and other services, said it made an underlying operating loss before tax of £15 million for the 26 weeks to 3 July, versus a profit of £56 million in the same period last year.

The Co-op said the shortfall reflected planned investment in staff and the business, as well as significant costs, impacts on sales and profit erosion related to product availability issues, and the ongoing effects of the Covid-pandemic.

In the trading report, the group warned that the ‘unplanned supply chain challenges and ongoing Covid costs will bring greater levels of uncertainty’.

It added: ‘This will in turn apply pressure on our prior expected level of profitability for year end.’

Food sales for the first half came in at £3.6bn, which was 6.5 per cent up on pre-pandemic levels but 2.8 per cent down from the same period in 2020, marking ‘an unprecedented year in purchasing behaviour’.

The group said there was a big focus on online services, and online food sales were approximately five times more during the first six months of 2021 compared to last year.

Online services are now available to 52 per cent of UK households and the group is aiming to increase this to 80 per cent by the end of the year.

On the funeralcare front, sales were down 7 per cent to £142m which the group said was due to a 17 per cent decrease in the number of funerals, with the death rate dropping below the five year average (excluding 2020) after March. 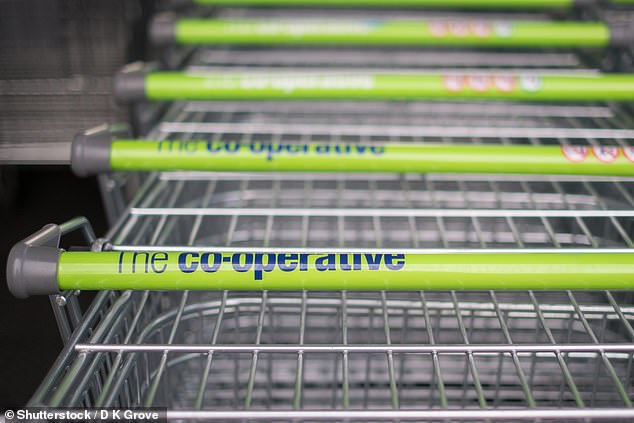 Food sales for the first half came in at £3.6bn, which was 6.5 per cent up on pre-pandemic levels but 2.8 per cent down from the same period in 2020 which marked ‘an unprecedented year in purchasing behaviour’

Meanwhile, with its insurance arm, the Co-op noted that the pandemic was continuing to impact sales including travel policies.

However, life and pet insurance both saw ‘very strong performances’ with 26 per cent and 45 per cent more policies sold than in the first half of 2020.

Commenting on the overall results, chief executive Steve Murrells said: ‘As we continue to experience the effects of the Covid-19 crisis, it is clear that things will never be the same again.

‘As a business and as a society, it is crucial that we learn from the last 18 months, particularly as we turn to the momentous task of rebuilding Britain and face into the continuing disruption to our business and our supply chains.’

The results came as the Co-op also announced a new partnership with Amazon and moves to ramp up an acceleration of robot deliveries to more than double online sales to £200 million by the year end.