By Simon Lambert For This Is Money

The competition watchdog has stepped in after the government called for an ‘urgent’ investigation into petrol station pricing after a week of pain at the pumps.

Business Secretary, Kwasi Kwarteng, urged the move over concerns that petrol and diesel prices are higher than they should be after the 5p fuel duty cut in the Budget.

The CMA says it will undertake a ‘short and focused review’ of fuel prices, as Andrea Coscelli, its chief executive said record pump prices are ‘causing significant concern’ for millions of people.

Meanwhile, both the RAC and AA have called for another fuel duty cut as early as this week.

Over the past week petrol prices have repeatedly hit record highs, with the cost of a litre of unleaded rising from 177.88p to 185.04p

The review was requested by Business Secretary Kwasi Kwarteng on Saturday.

The rising oil price and falling pound have more than outweighed the tax cut introduced in March, but petrol station operators have been accused of not fully passing on the fuel duty reduction.

Mr Kwarteng wrote a letter to the Competition and Markets Authority, saying: ‘The British people are rightly frustrated that the £5 billion package does not always appear to have been passed through to forecourt prices’

The CMA move came after a week in which petrol prices have repeatedly hit record highs, with the cost of a litre of unleaded rising from 177.88p to 185.04p.

‘This is an increase of 2p a litre on both since Thursday and takes the cost of filling a 55-litre family car with petrol to £101.77 and has led to the first ever £105 fill-up for diesel. Incredibly, the Government is now raking around £46 in tax from every full tank.

‘The speed and scale of the increase is staggering with unleaded going up 7p in a week and diesel by nearly 6p.

Should VAT be temporarily cut on petrol and diesel to tackle rocketing prices?

‘This must surely put more pressure on the Government to take action to ensure drivers don’t endure a summer of discontent at the pumps.

‘We hope the Government’s persistent talk about the importance of retailers passing on March’s 5p duty cut fully is a precursor to an announcement of a deeper cut this week.

‘If that’s the case, it’s very welcome, albeit overdue as the 5p cut has been well and truly overtaken by events on the wholesale market since then.’

The rapid rise in the cost of petrol and diesel has led to fresh calls for further tax cuts, including potentially a VAT cut tackling the double taxation, whereby VAT is charged on top of fuel duty.

Meanwhile, Jack Cousens, the AA’s head of roads policy, called for urgent action, saying: ‘To relieve pressure at the pumps we need an immediate 10p cut to fuel duty.’ 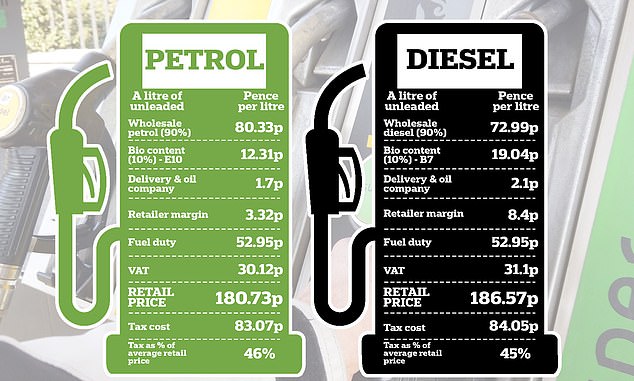