Is this Australia’s most uncoordinated crocodile? Salty named Teddy is left red-faced in front of a boatload of tourists after he fails to snap up a chunk of meat – TWICE

Teddy the giant saltwater crocodile doesn’t look like he has ever missed a feed but there is a first time for everything.

The five-metre beast was sitting on a riverbank at the Crocodylus Park in Darwin, Northern Territory, on Saturday when a boatload of tourists went past.

The skipper of Jumping Crocodile Cruises threw a chunk of meat toward the 500 kilogram reptile hoping he would launch himself into the air to snap up his lunch.

Teddy was instead left left red-faced as the meat grazed the side of his head, before tumbling down the riverbank out of reach.

Carlia Kate captured the incredible moment while aboard the tourist boat.

She told Daily Mail Australia the meat ended up falling into the river, so the skipper threw another piece.

The uncoordinated croc also failed his second attempt but managed to successfully grab the chunk of meat before another opportunist reptile.

Darwin’s Crocodylus Park is home to more than 40 saltwater crocodiles, including a few five-metre males that weigh more than 500 kilograms. 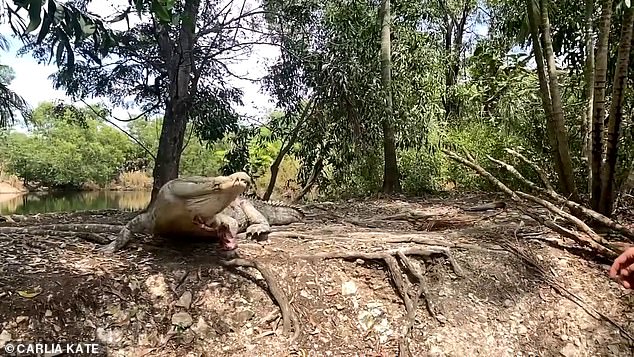 The uncoordinated reptile opened his jaws just a second too late, causing the delicious snack to roll down the riverbank out of reach

The saltwater crocodile is the largest living reptile species, with males growing up to 6 metres long and females around 2.3 metres.

The crocodiles have extremely strong tails that help the reptile make sudden lunges out of the water to capture prey.

There is estimated to be over 100,000 saltwater crocodiles in the wild in the Northern Territory, more than Queensland and Western Australia combined.

A large proportion of the coastal region of the NT is an ideal habitat for saltwater crocodiles, especially the wetlands and rivers.

The crocodiles eat anything they can overpower, including fish, turtles, snakes, birds, crabs and livestock.

The largest crocodile ever recorded was caught in a net on the Mary River in 1974. The 6.4 metre long croc was killed, with it’s head cut off with an axe.