Covid, tackling racism and compromise: Biden sets out his priorities in his first address as president-elect saying he wants Democrats and Republicans to work together again

President-elect Joe Biden laid out some of his top policy priorities in his Saturday night address in Wilmington, Delaware – including tackling climate change, racial injustice and improving healthcare.

‘Now that the campaign is over – what is the people’s will? What is our mandate?’ he asked. ‘I believe it is this: Americans have called on us to marshal the forces of decency and the forces of fairness.’ 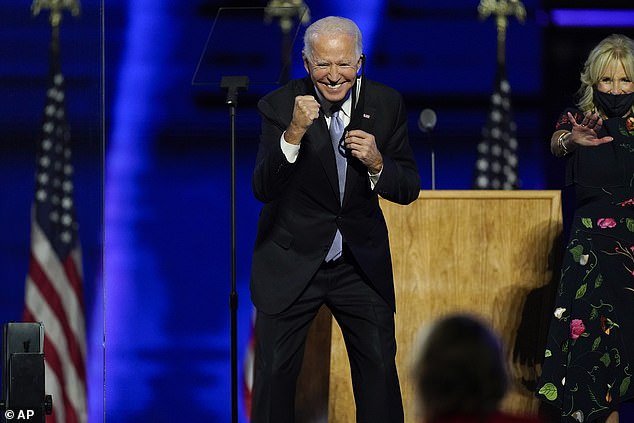 Biden, talking to friends in the audience after his address, said he wanted ‘decency’ and ‘fairness’ as part of his incoming administration

‘The battle to restore decency, defend democracy, and give everybody in this country a fair shot,’ Biden added.

On the over-arching issue of COVID-19, Biden said he’d start work immediately – even as President Donald Trump refuses to concede the election and as cases of the coronavirus continiue to explode.

‘On Monday, I will name a group of leading scientists and experts as transition advisers to help take the Biden-Harris COVID plan and convert it into an action blueprint that starts on January 20th, 2021,’ he vowed. ‘That plan will be built on a bedrock of science. It will be constructed out of compassion, empathy, and concern.’

‘I will spare no effort – or commitment – to turn this pandemic around,’ the president elect pledged.

He didn’t go into detail on other action items onstage Saturday night, but one thing that could hinder the future President Biden is if Senate Majority Leader Mitch McConnell maintains control of the Senate.

On Tuesday, Democrats came up short in their down-ballot races, only electing two new Democratic senators – and losing one – to where they would need both Georgia run-off races in January to go in their favor to gain control of the chamber.

After the primary concluded, members of team Biden and team Bernie Sanders put their heads together to come up with a comprehensive Democratic platform to work on going forward.

Having McConnell in power could dash some of those plans.

Biden never signed on to the Green New Deal – like his running mate, Vice President-elect Kamala Harris – but he did roll out an ambitious plan to combat climate change.

One top Biden priority will be to have the U.S. rejoin the Paris climate change agreement – after the country pulled out – officially on Wednesday – under President Donald Trump.

The bigger lift with a GOP-run Senate would be to get his planned $2 trillion legislation through Congress, which includes infrastructure investments like weatherizing homes and building electric vehicle charging stations.

He has long equated greening the U.S. to adding more jobs, a pitch he’ll likely continue to make as president.

In his pursuit for racial equality, Biden has pushed policies that would help black and brown Americans better accumulate wealth.

His plan includes policies that would increase minority home ownership, retirement savings acounts, and include things like job training.

On healthcare, Biden fought back the liberals in his party who promoted Medicare-for-all and has said he wants to fix the Affordable Care Act, which was passed by Congress and signed by President Barack Obama when he was vice president.

Later this month, the Supreme Court hears a case on whether ‘Obamacare’ stands – that decision, which will take a few months to come out, will give guidance on what in the law is salvageable.