Climate change is making a host of health conditions more common and severe, a review has claimed.

Researchers looked at 364 studies dating back to 1990.

They found rising global temperatures and increasingly severe weather events have increased the risks of strokes, dementia and multiple sclerosis.

But it is not just chronic illnesses, more mild ailments like headaches have also become more common, the study claims.

The body has to work harder to stay cool and pump blood round to different organs.

And evidence shows that when pollution is breathed in, it also seeps into the bloodstream.

This chronic stress on the on the body drives up the risk of brain disorders and neurological diseases.

Lead author of the study, Dr Andrew Dhawan, from Cleveland Clinic in Ohio, said: ‘Climate change poses many challenges for humanity, some of which are not well-studied.’

He added: ‘As we witness the effects of a warming planet on human health, it is imperative that neurologists anticipate how neurologic disease may change.’

Headaches are just one of the health hazards made worse by a warming planet, researchers from the Cleveland Clinic in Ohio found 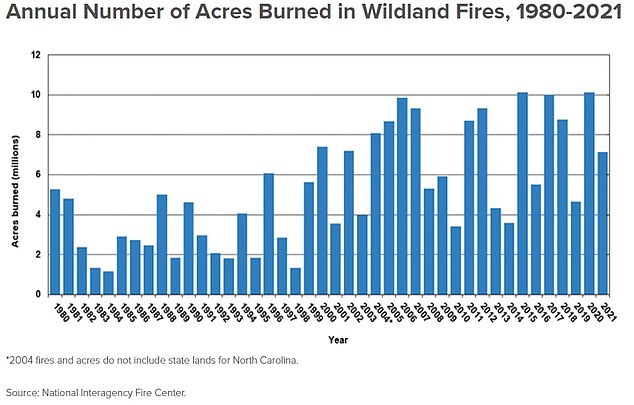 Wildfires, which have for years primarily affected the West coast, have burnt up more than 7 million acres of land. They have also spewed toxic smoke as far east as New York City, worsening air quality and putting people’s health in jeopardy. 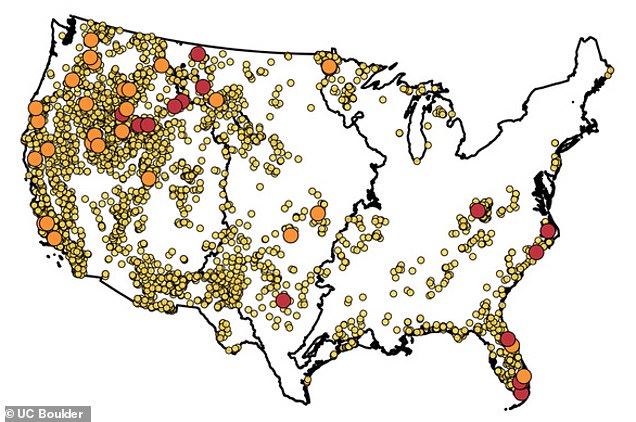 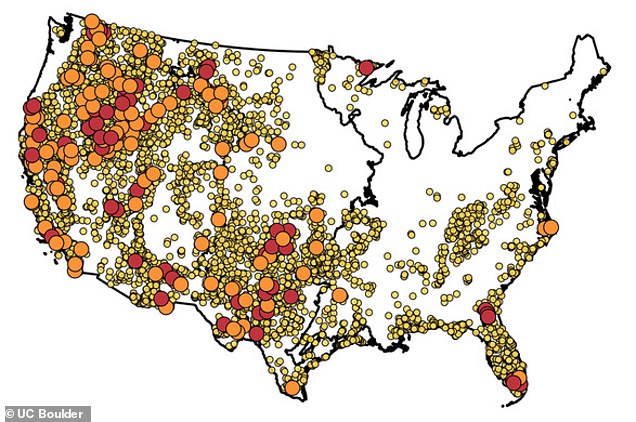 When exposed to hotter climates, your body becomes dehydrated as it needs more water to make up for what is being lost through sweat.

Even mild dehydration can trigger headaches and migraines.

According the the Cleveland Clinic, the brain shrinks when dehydrated, pulling it away from the skull and putting pressure on nerves as a result, which causes pain.

One study found that a higher average temperature in the day before turning up to hospital increased headaches by 7.5 per cent.

The researchers selected 364 studies on adults published between 1990 and 2022 — which looked at the link between health conditions and temperature changes, extreme weather events and air pollution.

America’s growing wildfire crisis could lead to a wave of heart attacks, lung disease and cancer diagnoses years down the line, scientists warn

The US’ increasing wildfire crisis could trigger a wave of health issues in years to come, scientists warn.

Recent wildfires across the west coast have spewed smoke in huge volumes that have spread nationwide, blanketing cities as far as the eastern US in a toxic haze.

Exposure to the toxins in wildfire smoke has been linked to elevated flu seasons, a spike in cases of asthma, heart attacks, strokes, kidney problems, lung irritation, bronchitis, dementia and mental health issues.

Wildfire smoke contains tiny toxic particles known as PM2.5 – made of solid and liquid droplets from burned material such as vegetation and heavy metals.

PM2.5 is so tiny it can seep into the bloodstream through the lungs and and travel to major organs, including the brain.

Keith Bein, an associate professional researcher at the University of California, Davis told Pew: It’s happening more frequently every summer… The length of the fires is growing. The public exposure to the smoke is also growing. Once-in-a-lifetime events are happening every summer. This is a different kind of exposure.’

State public health officials and climate experts are most concerned about the small particulate matter spreading through the air, a product of burning vegetation and manmade material such as cars, roads, and homes.

Erin Landguth, an associate professor at the University of Montana said: ‘We know that hospitalizations for asthma and other respiratory conditions spike within days or weeks of wildfires… The thought that this could potentially lead to effects later and how that can affect our immune system is really scary.’

This means new populations are at risk of diseases carried by animals and insects such as the West Nile virus, meningococcal meningitis and tick-borne encephalitis.

The study did not reflect on why dementia or multiple sclerosis may get worse with climate change.

It could be because elderly people are more at risk of health conditions generally during the heat, in part due to their age but also because they tend to live alone and may not drink enough.

Changes to external temperature can lead to extra stress on the brain, which makes it more vulnerable to processes ending up in disease such as dementia.

Multiple sclerosis means that nerve signals are slowed down.

Heat can temporarily worsen symptoms by slowing down these signals even more.

If the heat is due to constantly increasing global temperatures, symptoms may not improve.

One study of over three million Medicare patients in New England found that temperature increases of 1.5C led to a 12 per cent rise in hospital admissions for dementia sufferers.

Another study of over 22,000 headache visits to the emergency department showed that a 5C temperature rise was linked to a greater risk of any headache, particularly non-migraine headache.

The reasons for these changes were not clear, but the researchers speculated it could be down to temperature changes, ecosystem collapse, exposure to air pollution and food insecurity.

Your body sees temperature changes as stress, which can make you sick.

They also said it could be down to climate change causing more air pollution, which in turn leads to accelerated aging in the brain and arteries.

Global warming facilitates stagnant air through the increased heat, which can cause unhealthy levels of pollutants to linger.

Some air pollution particles are so small that they enter skin, and can accelerate brown spots, fine lines and wrinkles.

There was no consensus on why climate change might have an effect on strokes, but two studies found that colder temperatures led to increased strokes.

The researchers said that this could be because cooler temperatures increase the constrictions of blood vessels, which can cut off blood flow and oxygen to parts of the brain.

Extreme heat can also cause vulnerable people to suffer strokes.

In one study, scientists suggested that in the African ‘meningitis belt’, fine particles blown by the Harmattan winds intensifies meningitis transmission.

In the Czech Republic, flooding was associated with more cases of tick-borne encephalitis.

A limitation of the review was that all the studies took place in well-off countries, meaning the findings are not applicable to poorer regions, where climate changes may be more likely.

The findings were published in the journal American Academy of Neurology.

A report published on Wednesday showed that extreme weather is on the up, as ninety percent of the counties across the US suffered a weather disaster between 2011 and 2021.