Changes to land and climate caused by humans are to blame for the ongoing spread of dangerous pathogens from bats, a new study says.

The international team of authors have presented a stark warning for humanity if we want to avoid another viral pandemic similar to Covid.

The experts studied 25 years of data on land-use change and bat behaviour in subtropical Australia, between 1996 and 2020.

A scarcity of food for bats and the loss of their natural habitats, triggered by human land use and climate change, causes the movement of bats to more populated areas, they say.

This leads to spillover of Hendra virus – an infectious bat-borne virus – to its intermediate host, the horse, from which it can jump to humans.

Therefore, preserving and restoring natural habitats for bats could keep them away from such populated areas – and help avoid another lethal pandemic. 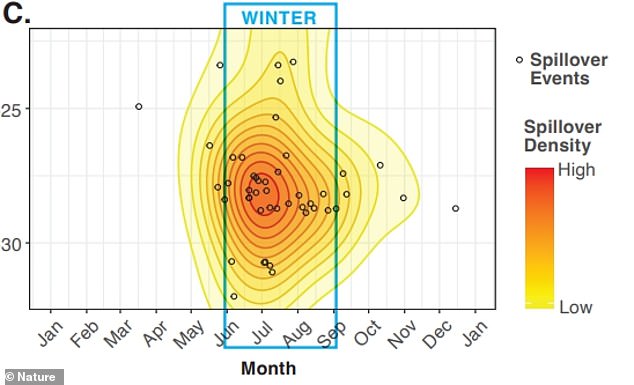 The researchers noted a high rate of spillover events during the Australian winter. A spillover is a virus’s jump from another species. Here, each dot is a spillover from a bat to a horse

The new study was led by Raina Plowright at Cornell University in Ithaca, New York, and published today in Nature.

WHAT IS A VIRAL SPILLOVER?

A ‘spillover’ event describes a virus’s jump from one species to another.

An example is the spillover of SARS-CoV-2, the virus that causes Covid, from a bat or pangolin to a human.

A spillover contrasts with a ‘spillback’ – a virus going from humans back into wild animals.

It refers to ‘spillovers’ (a virus’s jump from another species), which contrasts with a ‘spillback’ (a virus going from humans back into wild animals).

SARS-CoV-2 (the virus that causes Covid), SARS-CoV-1, Nipah, Hendra and possibly Ebola are all examples of viruses that fatally spill from bats to humans, sometimes after transmission through an intermediate host.

‘Zoonotic spillover is the transmission of a pathogen from a non-human vertebrate to a human,’ say Plowright and colleagues in their paper.

‘Spillovers of viruses from bats have resulted in the emergence and spread of viruses in the human population.

‘We observed rapid changes in bat behaviour that coincided with the emergence of Hendra virus.’

The black flying fox (Pteropus alecto) is the species most likely to excrete Hendra virus, although the virus infects other bats in the Pteropus genus too, such as the grey-headed flying fox.

The Hendra virus is not fatal to bats, nor does it cause ‘discernible disease’ in bats, but it can cause a highly fatal infection in horses and humans.

Amazingly, the Hendra virus has probably circulated in bats far longer than Europeans have occupied Australia, they add. 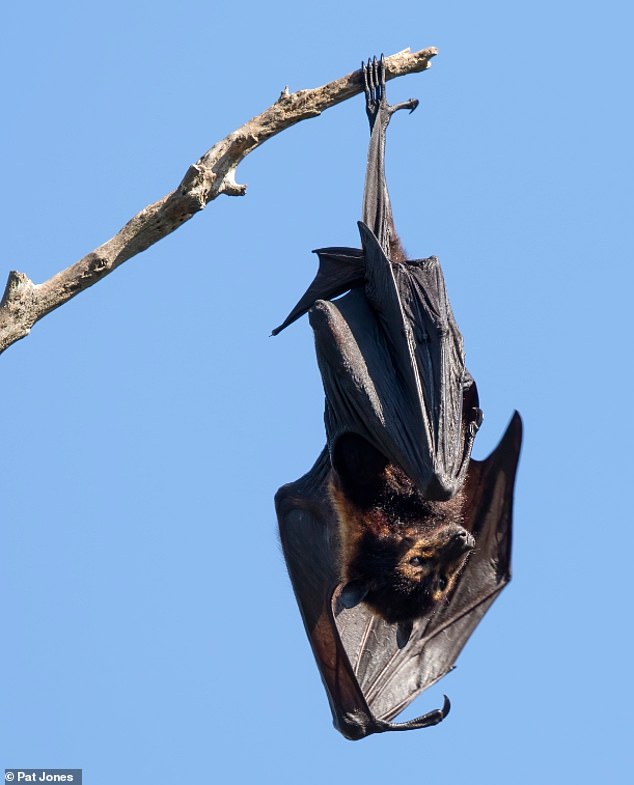 The grey-headed flying fox, a bat species native to Australia, are hosts of the Hendra virus, a deadly virus capable of spreading to humans. Pictured, a black flying fox (Pteropus alecto) hangs on a branch in an urban flying fox roost in Queensland, Australia

MELTING GLACIERS COULD CAUSE THE NEXT PANDEMIC, STUDY SAYS

Glaciers that are melting amid rising global temperatures could be the cause of the next deathly pandemic, a new study claims.

Scientists investigated how climate change may affect the risk of ‘spillover’ – a virus jumping to another species – by examining samples from Lake Hazen in the Arctic.

They found that the chance of a spillover event increases with the melting of glaciers, as the meltwater can transport pathogens to new hosts.

For the study, the team looked at a 25-year data set that included information on bat behaviour, distributions, reproduction and food availability, along with records of climate, habitat loss and environmental conditions.

The research focused on spillover to horses in the Australian subtropics, where the bat species primarily feeds on nectar.

Historically, the bats were nomadic, moving among roost sites to feed on the nectar of eucalyptus trees over hundreds of miles.

During the Australian summer, several tree species, including multiple eucalyptus species, are abundant and widely distributed provide food for the bats.

However, during the winter, few tree species provide food for bats, and the naturally limited distribution and abundance of these trees has been exacerbated by human activity – namely, clearing for urban development and agriculture.

When bats experience loss of winter habitat and food shortages in their natural settings, their populations splinter.

When populations break up, bats move near humans to agricultural and urban areas, where they feed in horse paddocks and pass on the virus to the horses.

‘Infected bats feeding in horse paddocks shed virus in excreta or spats that horses contact while grazing, leading to infection,’ the team say. ‘Humans are exposed via infected horses.’ 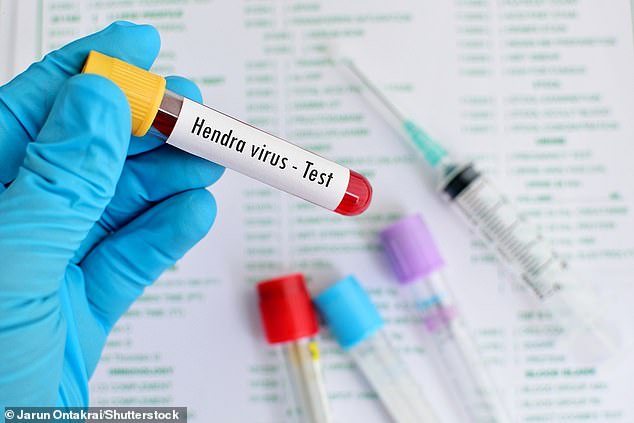 Hendra virus is a virus that infects large fruit bats (flying foxes). In humans the virus can be fatal (file photo)

The team note that in years when food was abundant in their natural habitats during winter months, bats emptied out of agricultural areas to feed in native forests, and away from human communities.

So preserving and restoring natural habitats could prevent pathogens that originate in wildlife from spilling over into domesticated animals and humans.

‘It provides a framework for examining causes of bat virus spillover and for developing ecological countermeasures to prevent pandemics.’

Earlier this year, the Hendra virus was detected in a Queensland horse for the first time in the Australian state for five years.

Biosecurity Queensland said they were working on containing the outbreak, having put down the horse and tested other animals on the property.

What is Hendra virus?

Occasionally the virus can spread from flying foxes to horses and horses can then pass the infection on to humans. A small number of people who had very close contact with infected horses have developed Hendra virus infection.

Hendra virus was discovered following an outbreak of illness in a large racing stable in the suburb of Hendra, Brisbane in 1994.

Hendra virus can cause a range of symptoms in horses. Usually there is a rapid onset of illness, fever, increased heart rate and rapid deterioration with respiratory and/or neurological (nervous system) signs.

In humans the virus can be fatal.

Symptoms typically develop between 5 and 21 days after contact with an infectious horse.