Switching from eating ‘land-hungry’ meat and dairy produce to foodstuffs like beans, lentils and nuts could remove 16 year’s worth of CO2 emissions by 2050, expert said.

Researchers from the US calculated that broad uptake of such plant-based protein alternatives could free up land to support more ecosystems that absorb carbon.

At present, around 83 per cent of Earth’s agricultural land is given over to meat and dairy -based production — much of which only produce low yields.

Reducing this figure, the team said, is a better way to combat climate change than waiting for ‘unproven’ large-scale technologies like atmospheric CO2 extractors.

Switching from eating ‘land-hungry’ meat and dairy produce to foodstuffs like beans, lentils and nuts, pictured, could remove 16 year’s worth of CO2 emissions by 2050, expert said

‘The greatest potential for forest regrowth, and the climate benefits it entails, exists in high- and upper-middle income countries,’ said paper author and environmental scientist Matthew Hayek of the New York University,

These, he added, are ‘places where scaling back on land-hungry meat and dairy would have relatively minor impacts on food security.’

In their study, Professor Hayek and colleagues mapped out the areas of the globe where land use for animal-sourced food production has squeezed out native vegetation, such as forests.

This allowed the team to determine where a shift in our diets to more plant-based foodstuffs could allow natural ecosystems to be restored — helping to offset global carbon dioxide emissions in the process.

The team concluded that — if the demand for land for meat production could be drastically lowered — vegetation regrowth in these locations could help to sequester around 9–16 year’s worth of fossil fuel emissions by the middle of century.

This would effectively double the planet’s so-called ‘carbon budget’ — the amount of fossil fuels emissions we can afford to release before we reach the threshold temperature rise of 2.7°F (1.5°C) above pre-industrial levels.

Exceeding this limit is expected to result in a significant rise in the number of severe impacts from climate change — including droughts and sea level rise.

‘We can think of shifting our eating habits toward land-friendly diets as a supplement to shifting energy, rather than a substitute,’ Professor Hayek said.

‘Restoring native forests could buy some much-needed time for countries to transition their energy grids to renewable, fossil-free infrastructure.’ 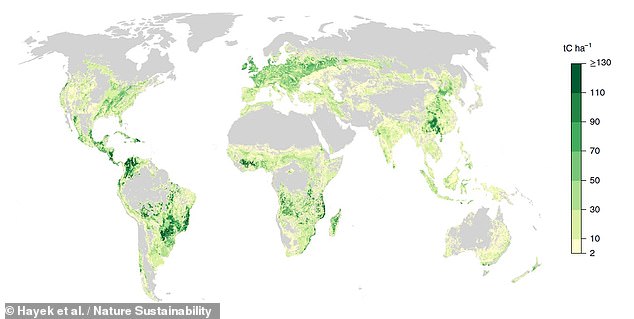 Professor Hayek and colleagues mapped out the areas of the globe where land use for animal-sourced food production has squeezed out native vegetation, such as forests. This allowed the team to determine where a shift in our diets to more plant-based foodstuffs could allow natural ecosystems to be restored and carbon to be sequestered out of the atmosphere — as depicted above, with darker greens representing more carbon storage potential

The findings could help locally targeted interventions as appropriate to help mitigate the effects of climate change, the team suggested.

‘Land use is all about trade-offs,’ added paper author and ecosystem scientist Nathan Mueller of the Colorado State University in Fort Collins.

‘While the potential for restoring ecosystems is substantial, extensive animal agriculture is culturally and economically important in many regions around the world.’

‘Ultimately, our findings can help target places where restoring ecosystems and halting ongoing deforestation would have the largest carbon benefits.’

Restoring natural ecosystems could have other benefits as well, said the team.

‘Reduced meat production would also be beneficial for water quality and quantity, wildlife habitat and biodiversity,’ explained paper author and ecologist William Ripple of the Oregon State University in Corvallis.

‘When coupled with reduced livestock populations, restoration reduces disease transmission from wildlife to pigs, chickens, and cows, and ultimately to humans.’

The full findings of the study were published in the journal Nature Sustainability.

HOW EATING MEAT AND DAIRY PRODUCTS CAN HURT THE ENVIRONMENT

Eating meat, eggs and dairy products hurts the environment in a number of different ways.

Cows, pigs and other farm animals release huge amounts of methane into the atmosphere. While there is less methane in the atmosphere than other greenhouse gases, it is around 25 times more effective than carbon dioxide at trapping heat.

Raising livestock also means converting forests into agricultural land, meaning CO2-absorbing trees are being cut down, further adding to climate change. More trees are cut down to convert land for crop growing, as around a third of all grain produced in the world is used to feed animals raised for human consumption.

As well as this, the nitrogen-based fertiliser used on crops adds to nitrous oxide emissions. Nitrous oxide is around 300 times more effective at trapping heat in the atmosphere. These fertilisers can also end up in rivers, further adding to pollution.

Overall, studies have shown that going vegetarian can reduce your carbon emissions from food by half. Going vegan can reduce this further still.