EXPRESS INFORMER > Travel > Climate change could cause ‘dust bowl’ in the US, study warns

Climate change could spark a ‘dust bowl’ in the US that is more devastating than what occurred during the Great Depression, researchers warn

The US is twice as likely to face a ‘dust bowl’ more devastating than what occurred during the Great Depression.

The stark warning comes from a study that used hundreds of climate simulations combined data from 1936 and present day greenhouse gases levels.

The results showed that if global temperatures rise more than 3.6 degrees Fahrenheit above pre-industrial levels, ‘dust bowl’ conditions could occur every 20 years.

Not only will the event bring intense heatwaves and massive droughts, but will also deplete the nation’s grain stores that would affect the world’s food system.

Dust bowl conditions in the 1930s brought extreme heat waves from 1934 through 1939 – when the US was enduring the Great Depression.

During this time, the nation experienced its hottest summers on record.

The land was arid and crumbling as a result of heatwaves and droughts that plagued the plain states that were home to thousands of new settlers.

The dust bowl was also sparked by the new farming practices and replacement of native prairie vegetation.

Tim Cowan, a researcher at the University of Southern Queensland in Australia, and lead author of a study in Nature Climate Change, said: ‘The 1930s Dust Bowl heatwaves were extremely rare events that we might expect to see occur once in a hundred years.’

‘Under today’s levels of greenhouse gases, they are more than twice as likely to occur, with their period-of-return reduced to once in around 40 years.’

Global warming was present in the 1930s, but the weather and climate changes were extremely small.

But now, nearly a century later, human-induced climate change is very apparent and is resulting in dire consequences, said senior author Friederike Otto, acting director of the Environment Change Institute at the University of Oxford.

If extreme heatwaves and drought reduce the vegetation as they did in the 1930s, heatwaves could become even stronger, threatening global food supplies,’ she said in a statement.

‘This scenario is more likely than ever, and should urge us to develop and implement more ambitious adaptation and mitigation plans.’

Mitigation refers to reducing the source of greenhouse gases, which are produced overwhelmingly by the burning of fossil fuels.

The warning follows a study conducted in March that shows a multi-year dust bowl dramatically reduces wheat supplies and reserves in the US, but also hinders the world’s food system.

The research suggest that at the four year mark of the event, US wheat exports would fall by half, and the country would exhaust 94 percent of its reserves.

A separate study published last year sounds the alarm of a megadrought in parts of the US that could last decades or even an entire century. 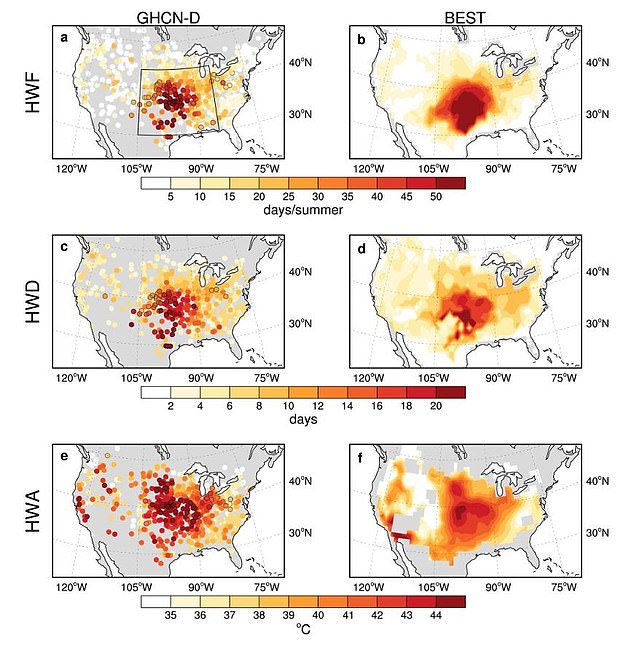 Dust bowl conditions in the 1930s (pictured) brought extreme heat waves from 1934 through 1939 – when the US was enduring the Great Depression. Experts say that if extreme heatwaves and drought reduce the vegetation as they did in the 1930s, heatwaves could become even stronger, threatening global food supplies

Parts of the US and Mexico have been plagued by a severe drought since 2000, making it the worse one to hit the area in the past 1,200 years.

The experts say the rising temperatures are to blame for about half the pace and severity of the current drought, which ranks the 11th worst to ever be detected.

A team from Columbia University used weather observation, tree-ring data and dozens of climate models to determine a drought more severe than anything from prehistory is likely to progress.

Lamont climatologist Richard Seager was one of the first to predict in a 2007 paper that climate change might eventually push the region into a more arid climate during the 21st century.

And he speculated at the time that the process might already be underway.

The effects of climate change in this area has been witnessed in the reservoirs of Lake Mead and Lake Powell, as well as the Colorado River – all have dramatically loss water over the years.

And California was plagued by deadly wildfires in 2019.