‘You are no better than me’: HSBC cleaner is praised for brutally honest note urging her ‘cruel’ boss to ‘be kind’ on her last day before retiring after 35 years

A cleaner who works at HSBC has gone viral after she penned a brutally honest note urging her ‘cruel’ boss to ‘be kind’ on her last day before retiring.

Twitter user Joe Cousins, from Southampton, shared his mother’s note in an online post, writing she had been cleaning banks for 35 years, adding: ‘Happy retirement Mum – always have the last laugh eh!’

In the note, the clenaer said she had chosen to leave after her manager had ‘dressed her down’ in an ‘aggressive’ way, adding: ‘So going forward, please all of you remember: in a world when you can be anything, BE KIND.’

Joe’s post quickly went viral and was quickly flooded with praise from other users, with one commenting: ‘Yess! What a woman. No one is better than anyone else.

The cleaner, from Southampton, who worked at HSBC, has gone viral after she penned a brutally honest note urging her ‘cruel’ boss to ‘be kind’ on her last day before retiring (pictured, a branch of HSBC in London)

‘I really hope this gets the attention it deserves because the bank needs to know lol.

‘Good on her. Happy retirement.’

Joe posted the note, writing: ‘And this is why I love my mum. She’s been cleaning banks for 35 years and today walked out with this lovely note left for that awful manager.’

The note read: ‘Hi ladies, tomorrow will be my last clean for HSBC. I have made up a bucket of cleaning materials for the next cleaner whoever that may be! 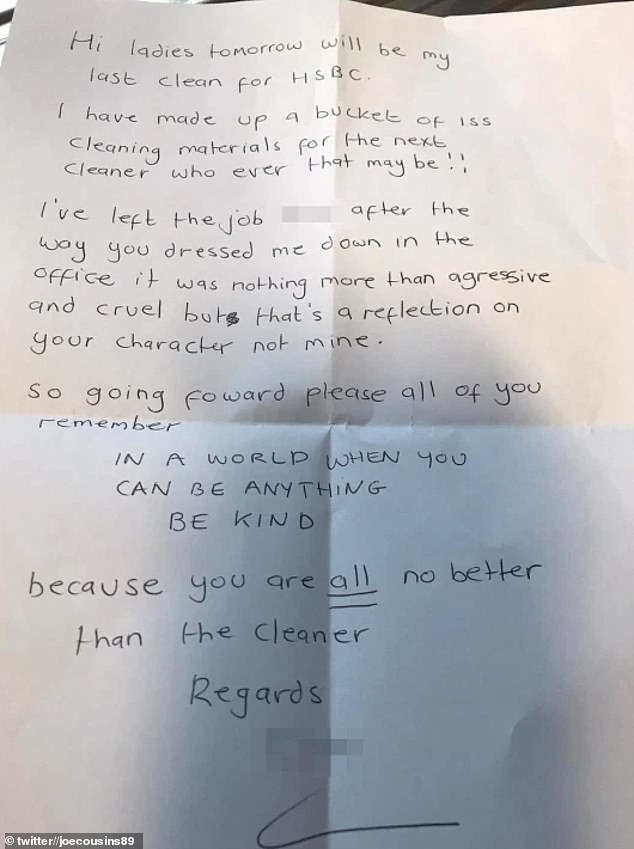 In the note, she said she had chosen to leave after her manager had ‘dressed her down’ in an ‘aggressive’ way

‘I’ve left the job [manager’s name] after the way you dressed me down in the office.

‘It was nothing more than aggressive and cruel but that’s a reflection on your character, not mine.’

She continued: ‘So going forward, please all of you remember: in a world when you can be anything, BE KIND.

‘Because you are all no better than the cleaner.’

Her son Joe shared the note on Twitter, saying he was proud of his mother for ‘walking out on an awful manager’

The tweet quickly went viral, with 144k likes on the platform in just days.

One person commented: ‘Your mum is an absolute queen and please give her all my love (and all of Twitters) for a happy retirement.’

Another wrote: ‘A manager dressing down someone in public. Always remember that a clown always needs an audience.’

One wrote: ‘Never understood why people think what they do for a living reflects their importance. I was raised to believe that a job is a job and anyone getting up and going to work deserves the same respect, whether they pick up the trash or run the company! 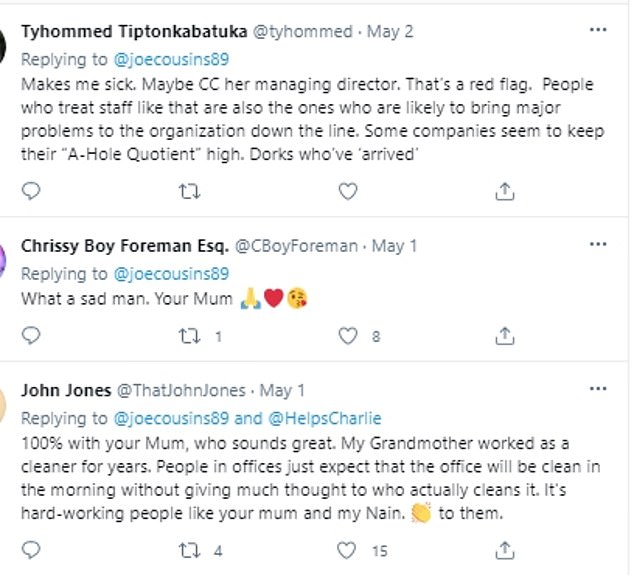 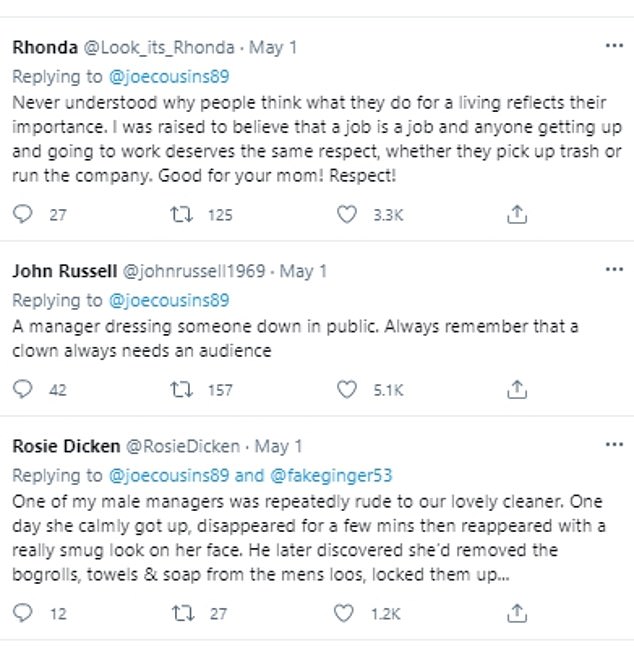 The tweet quickly went viral as other users flooded the post with praise for the cleaner, with some calling her ‘an absolute Queen’

‘Good for your mom, respect.’

‘Good for her. Kids are often rude to cleaners and dinner ladies in school too. I spend half my life pulling them up on it,’ a third added.

‘Makes me sick, ‘ another wrote, ‘Maybe cc her managing director. That’s a red flag. People who treat staff like that are also the ones who are likely to bring major problems to the organisation down the line.