CITY WHISPERS: Silver screen turns to gold for Cineworld’s vultures, who will be toasting extremely lucrative couple of weeks after betting against chain

But those betting against the world’s second-largest cinema chain will be toasting an extremely lucrative couple of weeks.

The company has long been a target of short-sellers sceptical of its ability to bounce back from the pandemic while struggling with a mountain of debt.

Under pressure: Cineworld has long been a target of short-sellers sceptical of its ability to bounce back from the pandemic while struggling with a mountain of debt

On August 16, according to S&P Global Market Intelligence data, about 15.1 per cent of its shares were classified as ‘on loan’ – a proxy for a short position.

This was one day before it admitted it was facing financial issues.

At the time, the shorted shares were worth £43.2million, but after the bankruptcy reports their value collapsed to £5.8million, a dive of 87 per cent and a horror show for normal investors.

However, the short sellers have made a profit of £37.4million in a fortnight.

Speaking of Cineworld, let’s not forget the businesses operating in its orbit that would suffer if it suddenly needed to shut lots of sites.

The Restaurant Group, which owns Frankie & Benny’s, is one of those firms.

But investment bank Peel Hunt says it could still have a blockbuster performance. 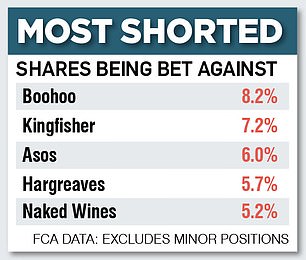 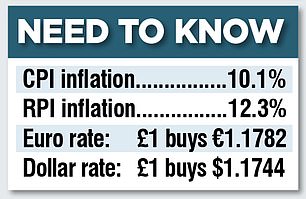 The fact that there have been fewer moviegoers has not so far hit TRG sales.

Maybe they should just start selling popcorn while they’re at it.

Being stock market darling not all glamour

Once you’ve grabbed everyone’s attention, the pressure is on to keep the high performance coming, lest you be written off as the financial equivalent of a one-hit wonder, as quickly forgotten as a former reality show star.

So it is for biotech firm Omega Diagnostics, whose impressive work during the pandemic saw its stock soar.

A failed fundraising earlier this year and a delay to its full-year figures will thrust the AIM-quoted group into an unflattering spotlight when it reports on Thursday.

At least there is one consolation, with the firm saying earlier this month that it expected to reap more from a recent sale than it previously anticipated.

Liam Condon, the new-ish boss of the chemicals and metals giant best known for making catalytic converters, has so far been a vocal advocate of the burgeoning hydrogen industry.

He has put his money where his mouth is so far – but sources said it was not clear yet if any new M&A will be in this sector and the company declined to comment.

Condon, an avid runner and polyglot, desperately wants the FTSE100 firm to play a major role in cleaning up the world’s emissions.

Whatever the next deal is, it will almost certainly be at least one shade of green.