The crypto world was rocked again last week – this time by the collapse of exchange FTX and another fall in the price of Bitcoin.

One person who avoided at least some of the latest pain is Peter Wall, head honcho at London-listed Bitcoin ‘miner’ Argo Blockchain. In March 2021, he became the first boss of a listed company to be paid exclusively in Bitcoin.

As he told an interviewer: ‘I actually woke up in the middle of the night and asked myself, ‘Why am I getting paid in fiat [government-issued currency]? Why don’t we just start paying ourselves in Bitcoin?’

Switch: Peter Wall became the first boss of a listed company to be paid exclusively in Bitcoin

But Whispers understands Wall quietly backtracked on the decision earlier this year and is now being paid in real money.

Bitcoin’s value has tanked by two-thirds since the start of this year – and Argo shares have fallen even more, by 91 per cent.

He told Whispers he felt ‘vindicated’ by the milestone.

Weston spent the pandemic assuring investors in the business, which has so far shunned internet shopping, that the fortune of online rivals would come back down to earth this year.

Could he mean Asos sinking 67 per cent, Boohoo 56 per cent and Missguided going bust?

Kier Group bosses could be getting a bloody nose over executive pay – for the second year in a row – at the contractor’s annual meeting on Thursday.

Proxy advisers Pirc and ISS have urged shareholders to vote down the firm’s 2021 pay report over concerns about hefty long-term bonus payments.

There remains ‘no compelling justification’ for the size of these awards, ISS said, especially when boss Andrew Davies saw a jump in salary from £595,000 to £750,000. 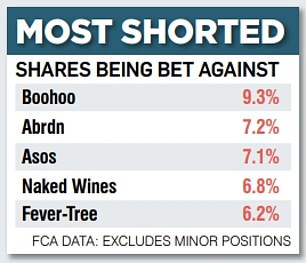 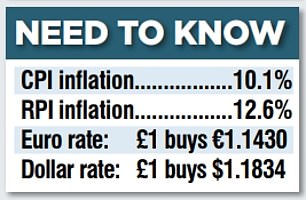 His total pay rocketed from £1.3million to £2.2million.

At the group’s last AGM, 26 per cent of votes pushed back against the pay report.

But the construction giant’s share price has almost halved this year – which could add more fuel to the fire.

There’s been little but tumbleweed on the London stock market for the last couple of months amid all the economic turmoil.

But independent British healthcare provider One Health has braved the listings desert and is pursuing plans for a flotation.

Founded in 2004, its services are free to GP-referred patients who are promised surgery six to eight weeks after an initial consultation.

Chairman Derek Bickerstaff describes the group as a ‘safety valve’ for the NHS as it relieves pressure on stretched waiting lists – offering procedures in orthopaedics, gynaecology and general surgery.

The flotation could raise more than £3million – which could fund growth beyond its current roster of 30 clinics.