The only primary school in the City of London is changing its name to distance itself from a 17th Century slave trader.

Governors at Sir John Cass’s Foundation Primary School said its name was ‘incompatible’ with the school’s values. It will now become The Aldgate School.

It announced on its website that the decision comes after the Black Lives Matter protests following the death of George Floyd in the US.

Two memorials to Sir John Cass, a bust and statue, are also set to be removed. 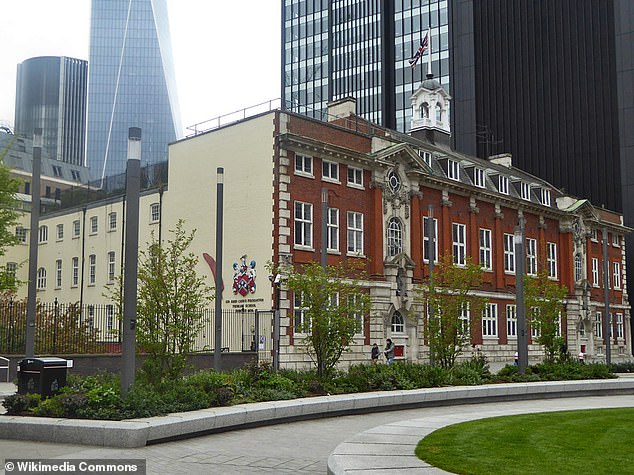 The new name will tie the school (pictured) to Aldgate, one of seven gates in the former Roman London wall which once stood directly outside the school

The new name will tie the school to Aldgate, one of seven gates in the former Roman London wall which once stood directly outside the school.

Sir John Cass’s Foundation was set up as an educational charity in 1748 and still funds the primary school.

Who was Sir John Cass?

Sir John Cass (1661- 1718) was a merchant, politician and Alderman for the ancient London ward of Portsoken, in 1711 was elected a Sheriff of London and later knighted.

Cass was responsible for helping the slave trade to establish across the Atlantic.

He dealt with slave agents in the African forts and Caribbean.

The Royal African Company was established by Royal  Charter under King Charles II. It gave a monopoly to the on trading in Slaves from ports in West. British slave trader Edward Colston played a large part in the running of the company.

The charity provides education for disadvantaged youth across London.

On its website, the foundation described Sir John Cass as ‘a merchant and politician, whose wealth posthumously was used to create the Foundation to deliver educational benefits to disadvantaged children’.

However, he was also a significant figure in The Royal African Company, which transported more African slaves to the Americas than any other institution during the Atlantic slave trade.

A statement from the school’s governing board, published on the school’s website, said it was ‘incompatible’ with the school’s values to be ‘celebrating’ Sir John Cass.

It read: ‘In June 2020, the Governing Board decided that the school should be renamed in light of Sir John Cass’s involvement in slavery, highlighted by the Black Lives Matter movement following the death of George Floyd.

‘The new school name should be one which is geographical rather than biographical, should retain a sense of the long history of the school and its links to the Sir John Cass’s Foundation and the Church of England, and should celebrate its unique position as the only state-maintained school in the City of London.’

The school adds that it is ‘committed to diversity’ and that ‘the way in which the curriculum is delivered in school will be reviewed, helping children gain a greater understanding of all histories.’

A Founder’s Day celebration will also be replaced with a new ceremony.

The school said the new name will be adopted as soon as legal approval is granted by the City of London Corporation.

The City of London Corporation has separately launched a three-month consultation into what to do with monuments associated with racism and slavery.