Citroen has confirmed the price of its tiny Ami electric vehicle for UK customers – and it will cost more than expected.

In France, the basic Ami costs from €7,390, which – based on current exchange rates – would suggest prices start from around £6,300 here.

However, Britons will need to pay more than that and won’t even get the steering wheel on the desired side of the car.

Citroen has revealed the left-hand-drive two-seat model will cost from £7,695 when first deliveries arrive this summer – and the single-seat ‘Cargo’ van version is £7,995.

Citroen’s super-small urban car: The Ami will be available in the UK from £7,695 this summer – which is more expensive than we originally thought it would be…

In theory, the Ami will become Britain’s cheapest car. But there is a catch; it’s not technically a car.

The 2.4-metre-long EV qualifies as a ‘light quadricycle’.

While this means it won’t feature the full complement of mandatory safety equipment needed for cars entering the market today, drivers as young as 16 can legally drive one on the road as long as they have an AM motorcycle licence for a 50cc moped.

The cheapest version is the standard Ami trim level, which comes with a digital speedometer, LED lights front and back, a panoramic sunroof and a USB charging point.

However, there are significant differences between the two vehicles.

While the Picanto can seat up to five people [at a push] with the addition of 255 litres of luggage space, has a top speed of 100mph and can travel for around 430 miles on a full tank of fuel, the Ami has just two seats, no boot, a flat-out speed of 28mph and a maximum driving range between charges of just 46 miles.

That said, the Citroen will cost a lot less to refuel. 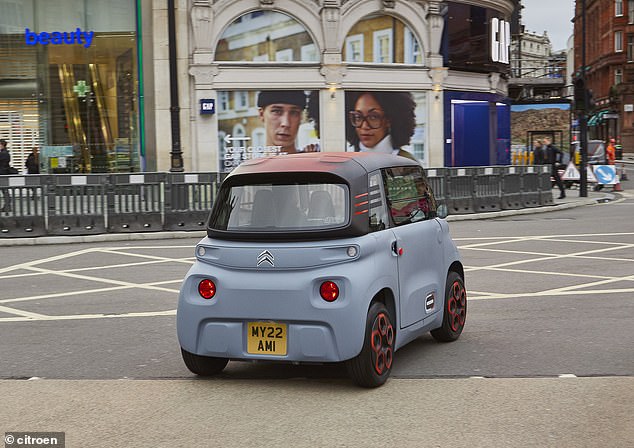 In France, the Ami starts from €7,390, which would suggest prices start from around £6,300 here. However, Britons will need to pay quite a lot more than that if they want one 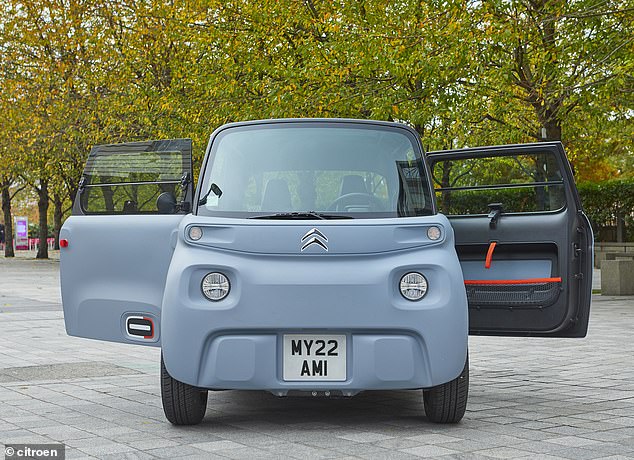 The 2.4-metre-long electric vehicle isn’t actually a car – instead it qualifies as a ‘light quadricycle’ 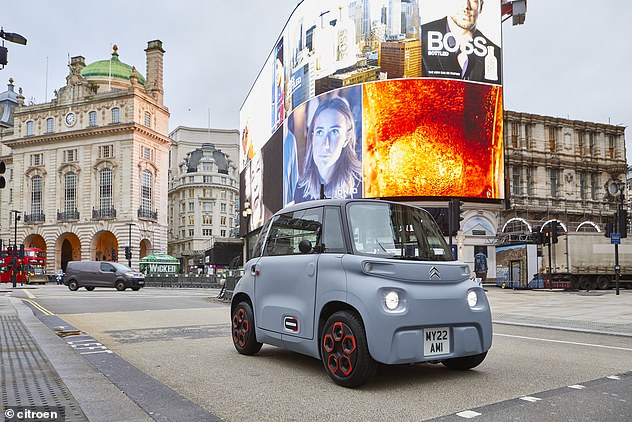 The examples sold in the UK will be from the same production run as the European-spec vehicles, meaning the steering wheel on the left-hand-side.

With the Ami’s compact 1.4-metre width, this won’t make too much of a difference in such a pocket-sized car.

It will come with plenty of customisation options at launch this summer.

For an extra £400, buyers can add a choice of three sticker packs, which are designed to be fitted at home. 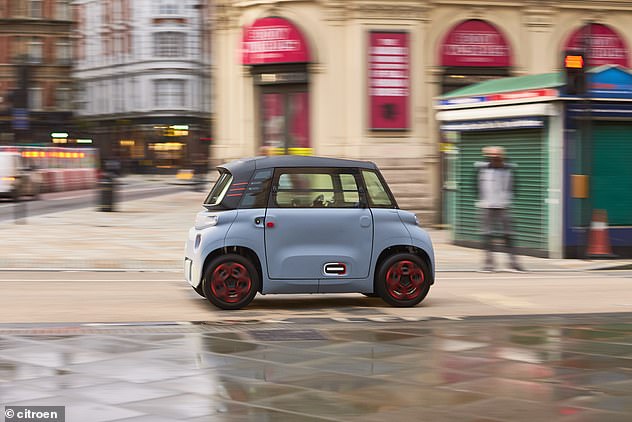 Being a light quadricycle, drivers as young as 16 can legally drive one on the road in Britain as long as they have an AM motorcycle licence for a 50cc moped 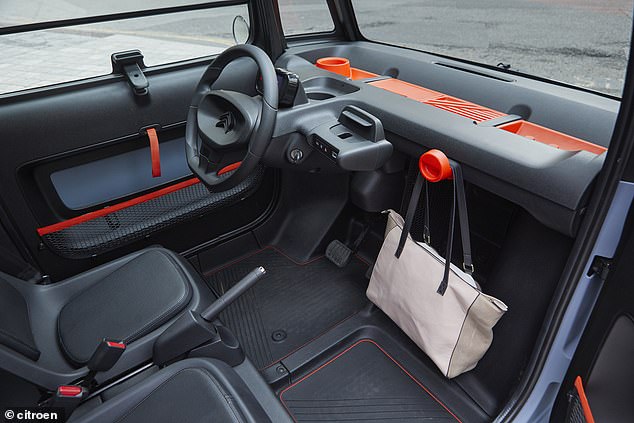 The examples sold in the UK will be from the same production run as the European-spec vehicles, meaning the steering wheel on the left-hand-side 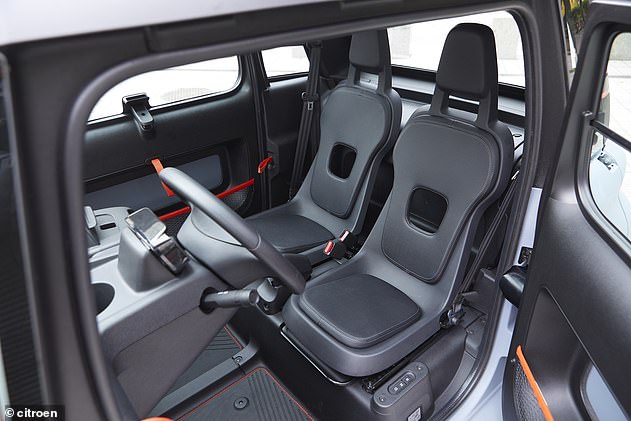 With the Ami’s compact 1.4-metre width, having the wheel on the left shouldn’t make too much of a difference in such a pocket-sized car

There are also two additional trim levels, with the Ami Pop and Ami Vibe specifications starting from £8,495 and £8,895 respectively with colour combos designated by Citroen. 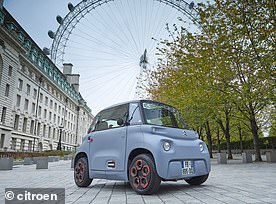 The single-seat Ami Cargo van – designed for businesses operating in cities to complete short-distance deliveries – will also be available this summer from £7,995.

It substitutes the passenger seat with a storage unit that boosts carrying capacity up to 400 litres for the transportation of parcels and packages.

All versions are powered by a 6kW electric motor and a 5.5kW battery, which can be charged via a cable built into the passenger door frame.

UK-spec models will all feature Type 2 connectors, allowing a full charge to be completed in just three hours from a home Wallbox or a public charging point.

Customers will only be able to order their Amis online, though Citroen says priority customers will be the ‘over 2,000’ who reserved one of the diminutive EVs since last year.

Interested customers will need to place a £250 refundable reservation fee, though Citroen has yet to announce when first deliveries will begin.

Buyers will be offered either home delivery for a small fee or collection from their nearest approved Ami retailer.

‘What’s really exciting is that we are launching Ami in the UK due to huge demand from the public – it’s a perfect example of our ‘Power to the People’ thinking.’ 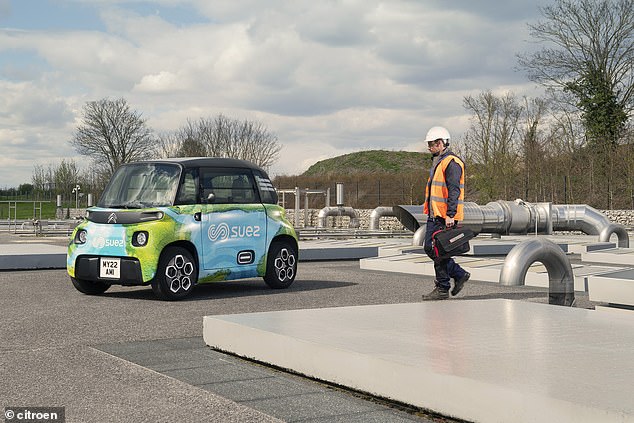 The single-seat Ami Cargo van – designed for businesses operating in cities to complete short-distance deliveries – will also be available this summer from £7,995 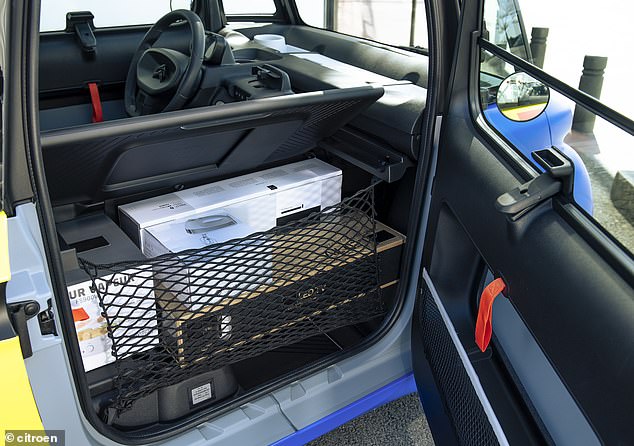 by Ray Massey for This is Money

In December 2020, we were given a first opportunity to try the Ami on UK roads, with a brief test drive in Coventry.

The first thing that grabs attention is its size and cubic styling.

It’s compact to the point of being minuscule in automotive terms. Tape-measure out, it’s just 2.41 metres long, 1.39 metres wide and 1.52 metres high.

Most of it is sculpted plastic on a metal frame. It may be basic, but it’s undeniably clever and very well executed.

To save costs, the two wide doors are identical. But they are hinged differently either side so open in opposite directions. 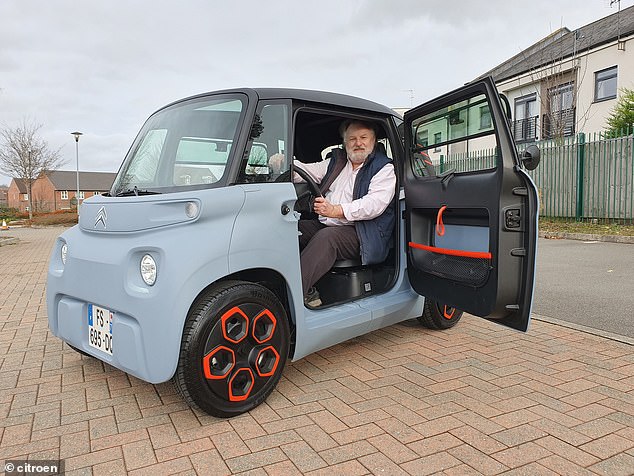 The driver’s door is hinged at the rear so opens outward from the front, Rolls-Royce style.

The passenger door is hinged more conventionally from the front and opens in the normal way.

It cuts costs because Citroen only need to make one door – which can be used both sides.

The same goes for the front and rear bumpers and side panels – all of which help to keep production costs down.

Inside it’s remarkably light and airy with great visibility thanks to the profusion of glass from a wide and high windscreen, generous side windows and a large fixed sun-roof – the glazing above the main bodyline covers half the total surface.

The side windows open manually and tilt upwards outside – just like the original 2CV. 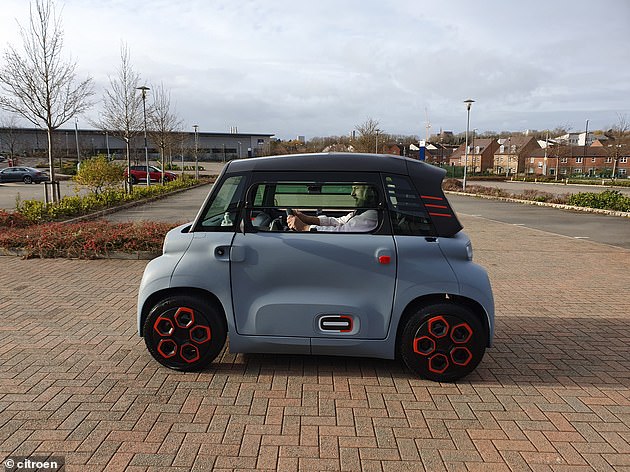 A tiny dashboard screen tells the driver their speed, battery level, range, and drive mode, but that’s pretty much it.

To the right of the steering wheel is a small holder for a smartphone which – via an app – provide sat-nav and infotainment options.

Such is the effort to keep production costs low, the interior door handles are fabric straps.

While there’s no boot, there are a few imaginative storage cubby holes include cargo nets in the door recesses, bright orange removable inlay trays below the windscreen, and a hook for handbags or takeaways.

With a wheel at each corner it will turn on a sixpence. The turning circle is a mere 7.2 metres, which is perfect for fast U-turns on narrow roads and parking in tight spaces. 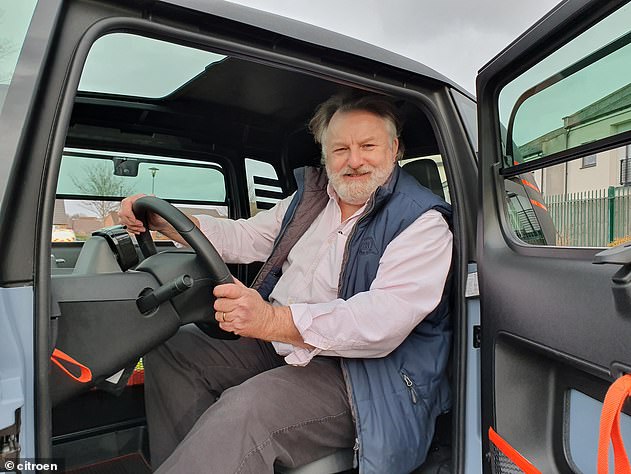 The moulded plastic seats might not look it but are surprisingly comfortable, says Ray. However, luggage space is almost non-existent, so you’ll need to travel light

The little Ami is fully in its element at lower speeds, zipping through city streets for which it has been designed primarily as an ‘urban mobility’ alternative to bicycles and electric scooters.

Anyone who’s been behind the wheel of an electric golf buggy hurtling down the fairway with their golf bag and clubs strapped in the back will instantly recognise the sensation.

It gasps and wheezes up steep inclines as the power drops.

And if you get really cold, the heater not only zaps some of the power but makes such a racket that it’s best to wrap up warm to avoid using it.

Ride and handling is also not its strong suit, to put it mildly.

Rough as old guts, in fact. It shakes, rattles and rolls like the milk bottles in an electric milk float.

The moulded plastic seats might not look all that cosseting but are surprisingly forgiving, despite the skateboard-like suspension qualities, which are as compliant as that of a Challenger tank riding over a cratered Salisbury Plain.

Taking it out of the city – to Coventry’s infamous ring-road, for instance – is a fabulous test of nerve and driving skill – and you really have to be on the ball as you become a teeny 28mph chicane for other drivers.

Yet for all of its short comings [pardon the pun], it really is a hoot to drive. It’s great fun, as long as you restrict yourself to slower roads.