Cinderella gives stepmothers a bad name… and the evil character should be written to be more kind, says Kirstie Allsopp

The wicked stepmother’s cruel treatment of Cinderella has been drawing hisses from theatre audiences for centuries.

But now the famous character has finally won some sympathy – from TV star Kirstie Allsopp.

With Cinderella set to return in Andrew Lloyd Webber’s forthcoming West End production, Allsopp, 49, has criticised the ‘profoundly damaging’ effect the story has on stepmothers’ image.

‘Is there any hope it has a fairer, kinder depiction of stepmothers?’ tweeted Miss Allsopp, who has taken on the role with her long-term partner Ben Andersen’s children Orion and Hal.

‘So many children have/will have step-parents. Depicting them as evil is profoundly damaging,’ she continued.

‘Does it not occur to anyone that the reason so many people have had bad experiences with step-parents may in part be the evil depictions of them in almost every book/play/film? 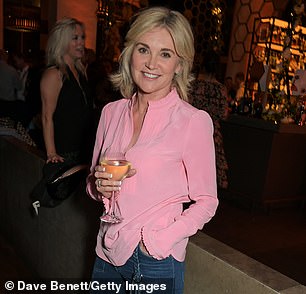 ‘This is not ‘woke’ or ‘PC’, though I’ve no problem with being either, it is common sense.’

Anthea Turner waded into the big debate on the depictions of step mothers last February as she claimed that despite not having an ‘umbilical cord connection,’ the bond between her and her ex Grant Bovey’s three daughters is more special because they chose it.

‘Had it not been for them, I might have pushed for more IVF,’ she told Closer.

‘But one day I thought, ‘Why am I doing this to myself when I have these three amazing kids.’

The radio DJ, 39, is married to musician Jesse Wood, 44, and stepmother to his children Arthur, 18, and Lola, 15, whom he shares with first wife.

‘Blended families are commonplace but the representation of step parents (especially mums, it never seems to be the stepfather) in kids fiction needs to change to suit the times,’ she tweeted.