Ciara turned heads when she stepped onto the red carpet as she arrived at the 7th Annual Imagine Ball in Los Angeles earlier Sunday evening.

The Level Up singer, 36, made a fashion statement and donned a black minidress with platform boots as she attended the special event.

The beauty was accompanied by other celebrities who stopped by, including former professional basketball player, Earvin ‘Magic’ Johnson, 63.

Fashionable: Ciara, 36, turned heads as she arrived at the 7th Annual Imagine Ball in Los Angeles earlier on Sunday evening

The Goodies hitmaker attended the star-studded charity event by donning a belted, black mini dress that accentuated her slim waist.

The fashionable off-the-shoulder ensemble showcased the performer’s long, toned legs as she posed for a quick photo session.

Ciara slipped into a pair of shiny, black platform boots to add an edgy look to her outfit.

For a finishing touch to her dress, the talented star added a pair of stylish, black gloves.

Edgy: The Goodies hitmaker opted for a faux leather belted minidress and platform boots as she attended the charity event 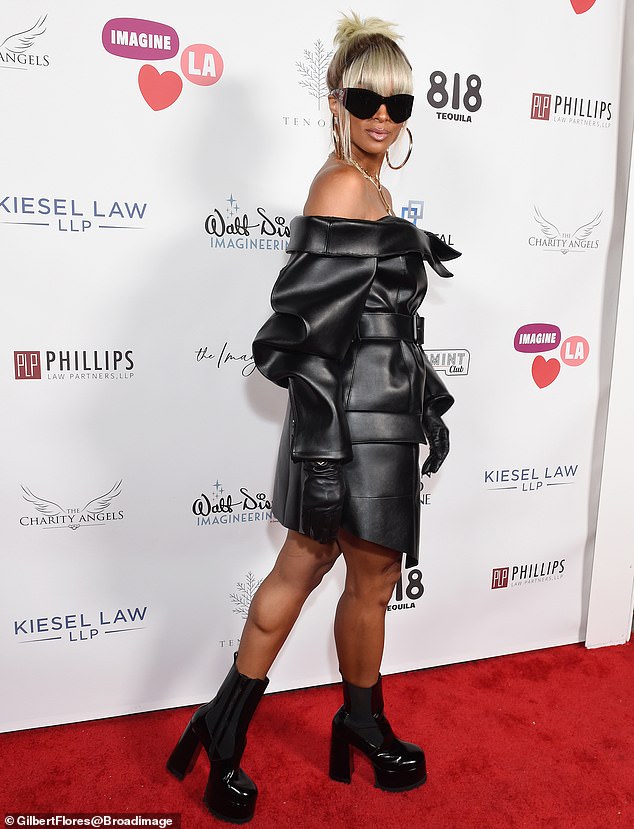 Stunning appearance: The beauty appeared to be in high spirits as she paused for photos on the red carpet 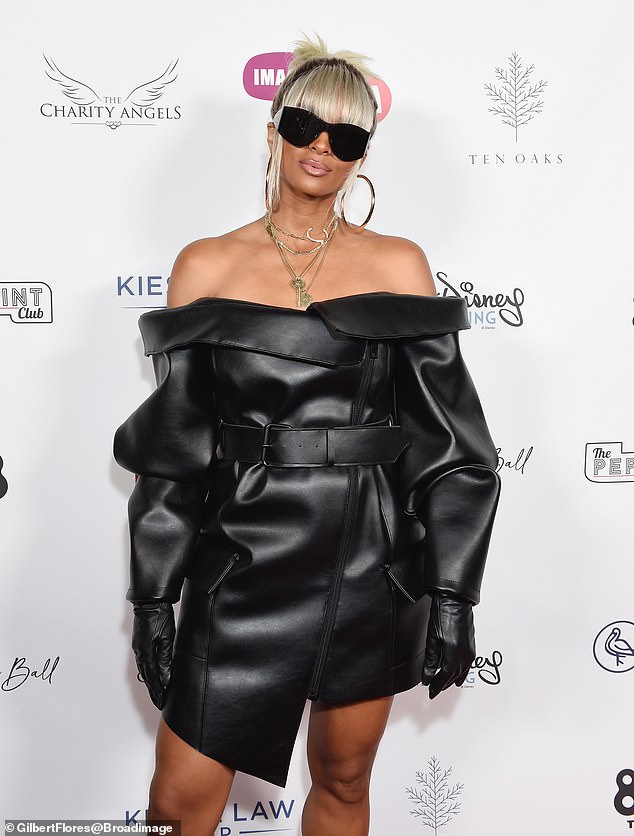 Accessories: For a pop of color to her monochromatic ensemble, Ciara added gold earrings and various gold necklaces

The star’s blonde hair was pulled up into an up do, allowing her bangs to fall straight onto her forehead.

To accessorize her look and for a pop of color, Ciara added a pair of large, gold-hooped earrings, along with an assortment of gold necklaces.

The Grammy award-winning singer threw on a pair of black sunglasses to protect her eyes from the bright flashes from the paparazzi’s cameras.

The 7th Annual Imagine Ball is a special charity event that is put together to help raise funds for the nonprofit organization called Imagine LA.

The nonprofit was created to end the cycle of family poverty and homelessness and assists families to have housing stability, according to the official website. 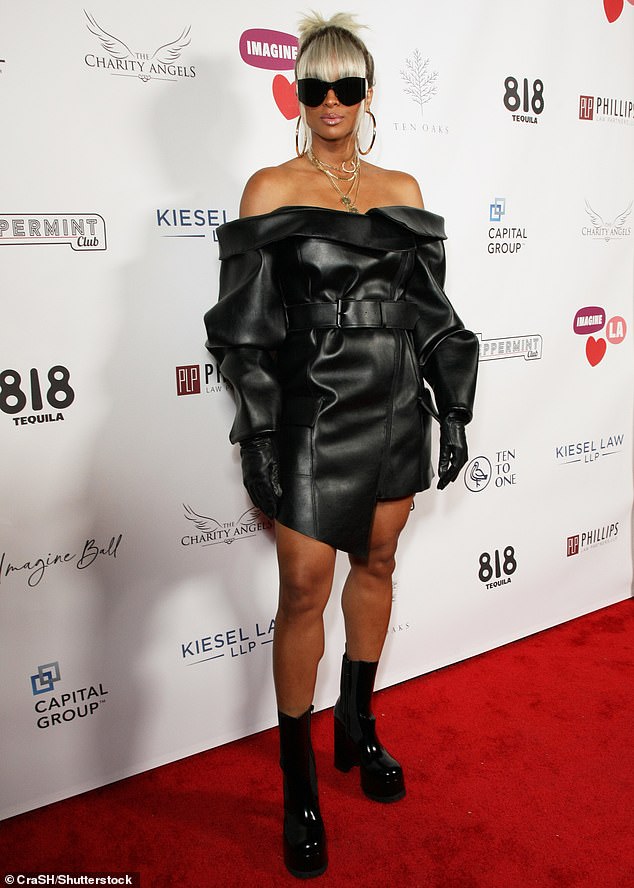 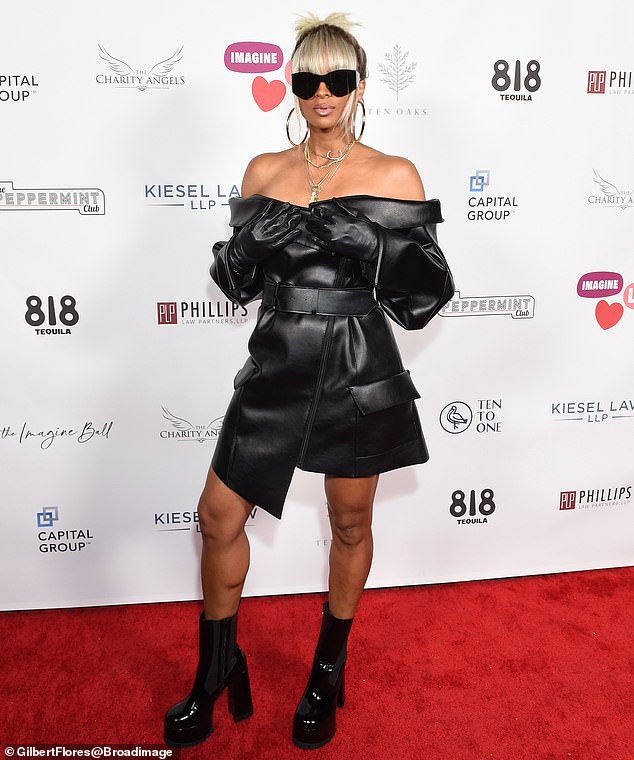 Special guests: The special charity event has both comedy and musical performances during the evening 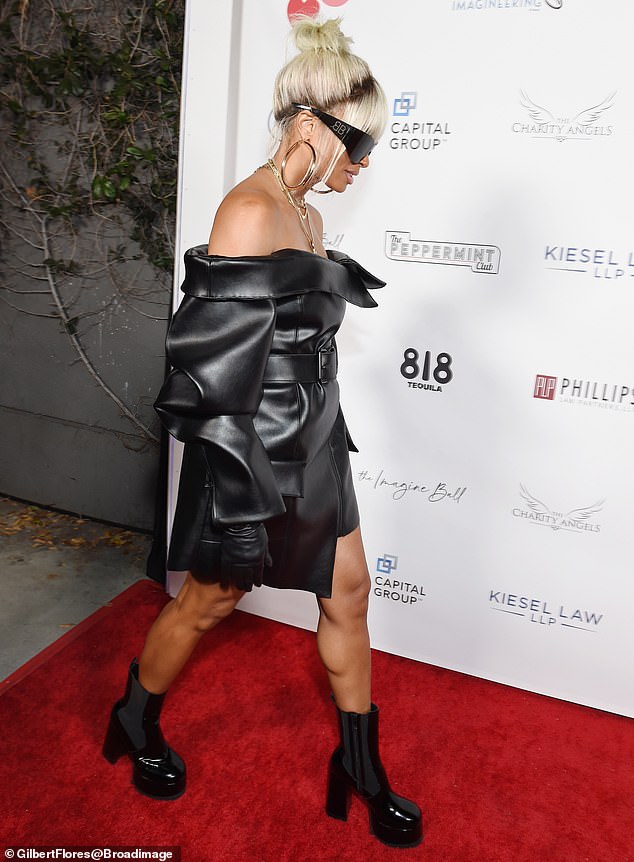 Show-stopping arrival: Ciara was pictured stepping onto the red carpet before posing for a few snaps

Along with Ciara, other stars who made an appearance at the charity event included former professional basketball player, Magic Johnson.

The famed sports player dressed to impress as he arrived at the charity ball. He donned a dark-green suit which he paired with a white dress shirt.

The star added a blue patterned tie and slipped into a par of brown-colored dress shoes.

The former Lakers star was honored with the special Rise Together Award during the event. 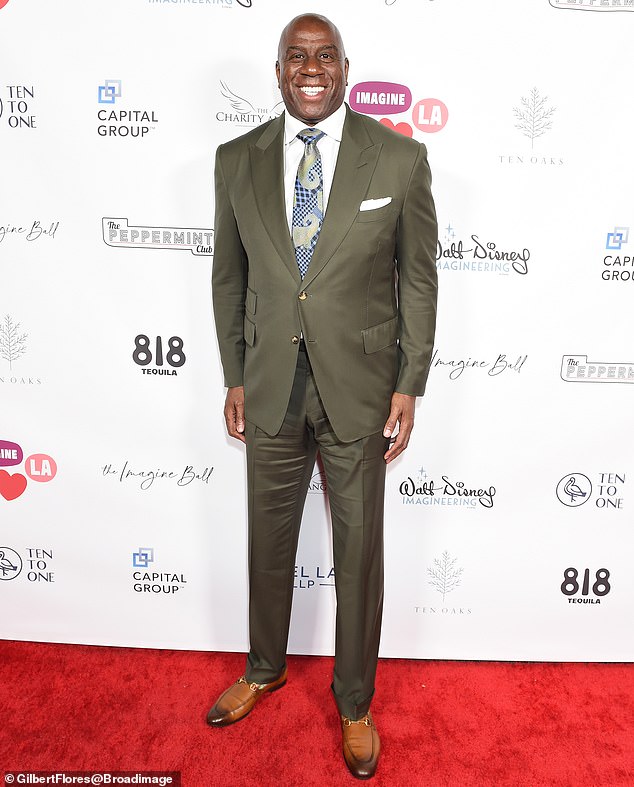 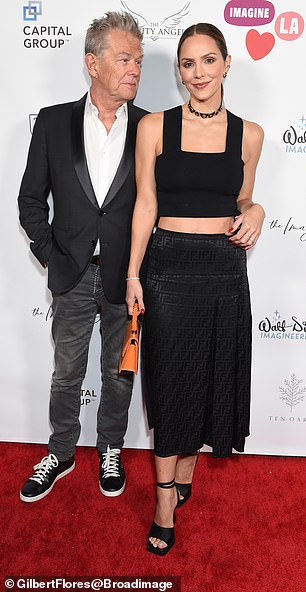 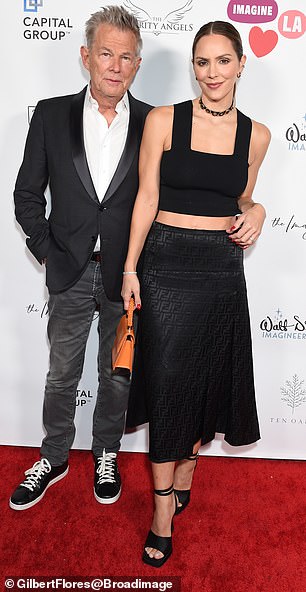 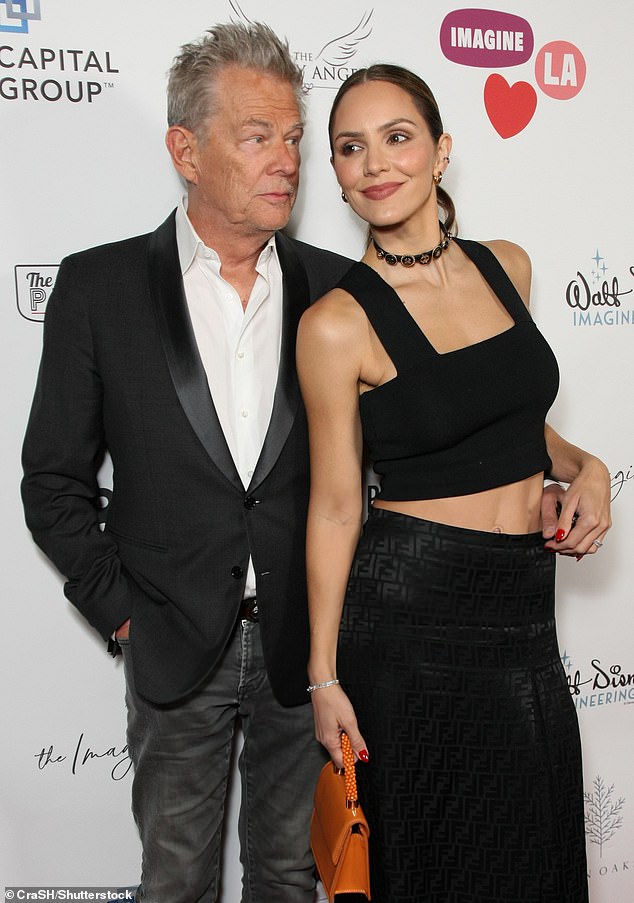 True love: David, 72, explained to People, that age difference has not hindered his marriage to Katharine, 38

Canadian musician and composer, David Foster, also was in attendance on Sunday evening.

The performer, who has won a total of 16 Grammy awards throughout the course of his career, kept his look stylishly casual.

The Best Of Me singer wore a pair of gray jeans along with a white dress shirt. He added a black suit jacket on top to complete his ensemble.

His wife and American Idol alum, Katharine McPhee, accompanied her husband and cheered him on as he performed during the ball.

She donned a sleeveless cropped top with thick straps along with a black satin, Fendi skirt. The singer slipped into a pair of black, open-toed heels to complete her look for the evening. 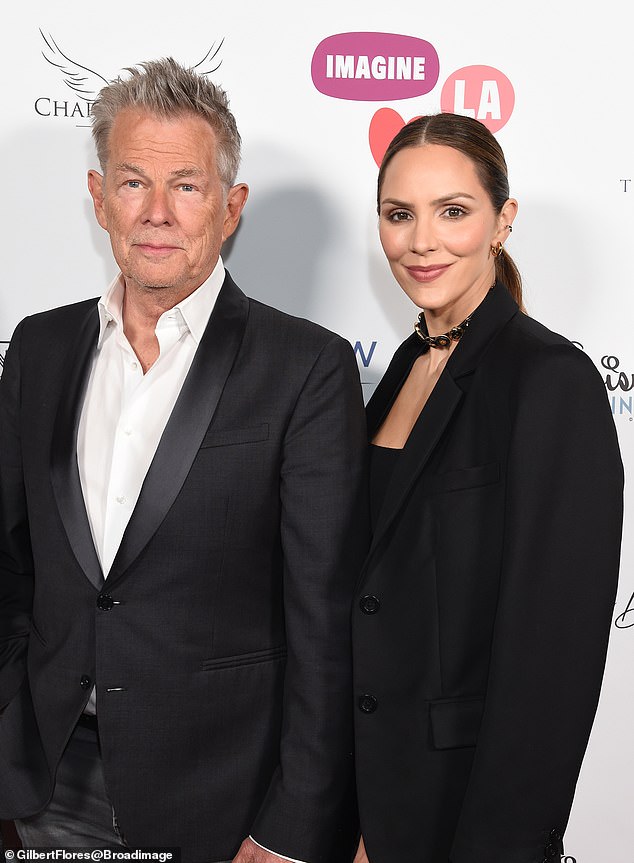 Lovebirds: David and wife, Katharine McPhee, posed for adorable photos together on the red carpet

All-black ensemble: Similar to Ciara, Katharine also donned an all-black outfit as she attended the event 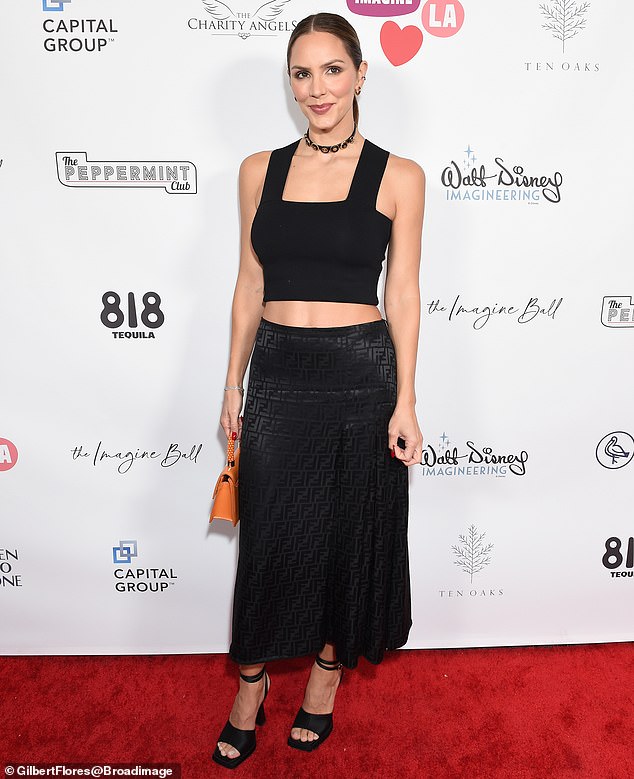 Adorable: David and Katharine were first linked in 2017, and tied the knot two years later in 2019

The couple were first linked in 2017, and tied the knot in 2019. The 72-year-old musician opened up to People earlier this year about the age difference between himself and his wife, who is 38.

‘People always make the reference with Kat and I with the age difference, but I’ve always said there’s so many things that can bring a marriage down, and age difference is just one of them,’ David stated.

‘There’s so many things that can go wrong. We think we have it pretty together,’ David concluded.

Katharine was also pictured with Pia Toscano, who is also a former American Idol contestant. She donned a shimmering, long-sleeved minidress which she paired with black, strappy heels.

The beauty is set to release her debut album called, I’m Good, later this month on October 14. 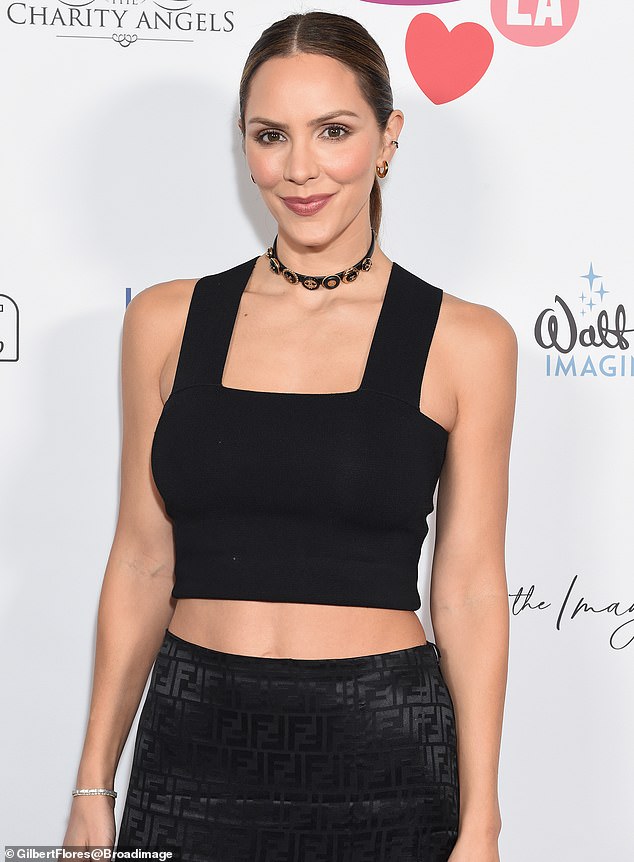 Chic: The talented singer donned a black cropped top which she paired with a stylish Fendi skirt 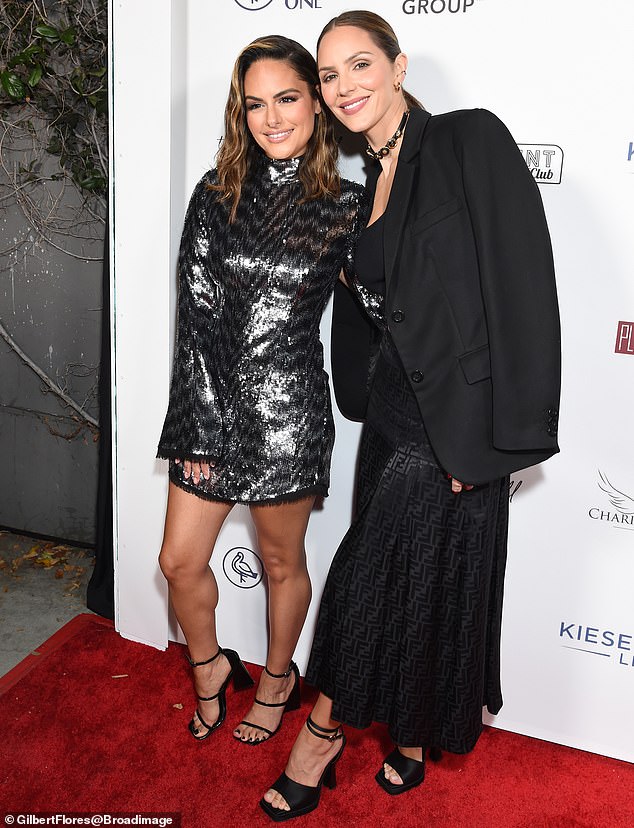 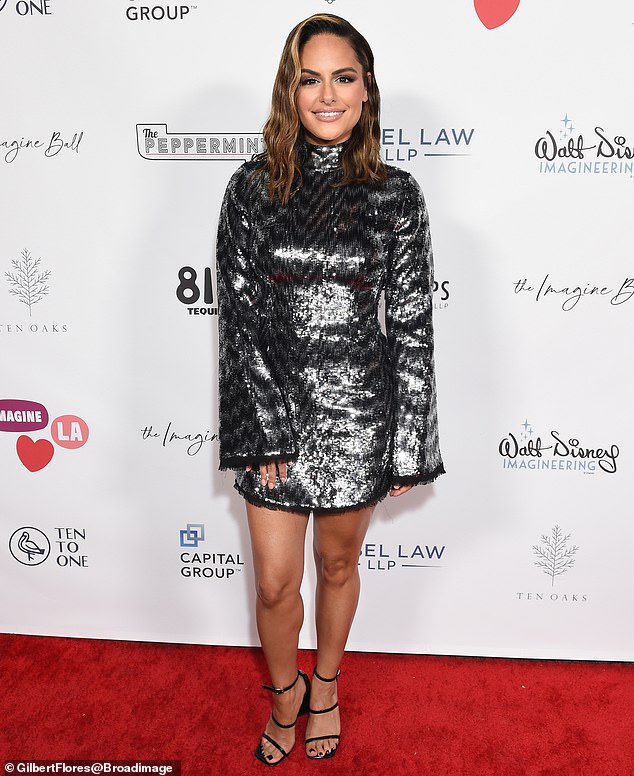 Beautiful: The talented singer opted for a shimmering silver minidress with long sleeves at the Imagine Ball