50 Years At The Opry

Springtime On The Farm

What a repertoire Dolly Parton has. Not just the string of classic country songs she has written, but the one-liners.

Much of her humour is defiantly self-deprecating: ‘I haven’t aged that much, but I have certainly aged my plastic surgeons.’

And then there’s her No 1, top-of-the-hit-parade gag: ‘It costs a lot of money to look this cheap.’ 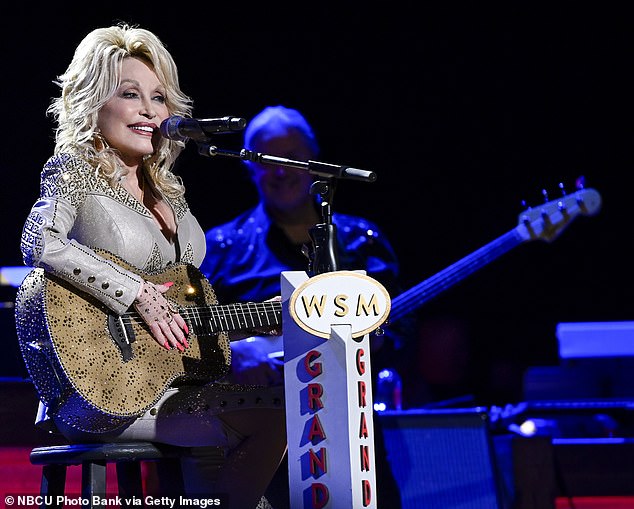 Dolly’s big quips were to the fore as she celebrated half a century of success and fame in 50 Years At The Opry (BBC2) with a command performance at the Ryman Auditorium, ‘the mother church of country music’ in Nashville.

She delivered some of her greatest numbers with lashings of American sincerity, thanking God and her fans in equal measure, before launching into Joleen, Coat Of Many Colours and 9 To 5.

Away from the audience, just talking to the camera, she revealed a softer side to her voice with a solo version of the Hank Williams gem I’m So Lonesome I Could Cry. She’s still got that aching throb in her tone that made her a star.

The 75-minute special featured too many filler performances by other acts. Where the show really fell down, though, was its failure to recognise what an influential figure Dolly Parton was in an era when country gals were supposed to sing loud and then shut up.

Ken Burns’s eight-part documentary Country Music on BBC4 told her story much better last year, tracing how she broke free from the shackles of a music business run entirely by men in the 1970s.

In her gold stiletto platforms and a cleavage full of rhinestones, she doesn’t look like a feminist icon. She dropped one hint of it, saying: ‘There was a lot of good ol’ boys in those days, and if they didn’t have double standards they’d have no standards at all.’

But she performed probably her greatest song without explaining that it was written expressly to enable her to break her contract with her oppressive, manipulative manager and go solo.

Lost paradise of the night:

We watched through mists and from the air as Lake District shepherd Andrew Harrison guided his flock down Scafell Pike on The Great Mountain Sheep Gather (BBC4). Right now, you’d have to be a sheep to be allowed out there.

Knowing she needed every ounce of flattery and charm to escape, she called the song I Will Always Love You.

If you don’t know Dolly’s version, you’ll definitely remember Whitney Houston’s. The woman from the Smoky Mountains wasn’t the only diva on display. Villanelle returned, as a new episode of Killing Eve arrived on iPlayer.

It airs on BBC1 this Sunday, though the Mail published a sneak preview last week.

If you happened to have missed that, the verdict is that the international assassin has gone awfully dowdy. Dolly’s wardrobe easily trounces Villanelle’s.

Another strong woman was strutting her stuff on Springtime On The Farm (C5) — not presenter Helen Skelton but Louise, the lop-eared sow, had just delivered three female piglets in the sty at Highclere Castle. Highclere is where Downton Abbey was filmed, and Lady Carnarvon who runs the farm was toying with the idea of calling the litter after Lord Grantham’s girls: Mary, Edith and Sybil.

That wouldn’t be smart. One will dump every male that dares to try it on, one will find her suitors mysteriously vanish in the night, and the third will run off with a highly unsuitable pig from the wrong background.

It’s a recipe for disaster.

If this show does not suit costume drama addicts, it’s ideal for fans of James Herriot. Deft editing means the stories switch back and forth with plenty of pace, and there was lots of 2am lambing. It’s a welcome escape.