Dogs are the most highly evolved creatures in the universe. They might not be able to talk, drive or hold a screwdriver, but why would they need to? They’ve got us.

Think about it: dogs live in our warm homes and spend their lives sleeping or playing or getting their tummies tickled. When did you ever see a pooch with its head in its paws, fretting over the electricity bill? Money worries are for mugs like us, not mutts like them.

Rescue dog Elina, on 12 Puppies And Us (BBC2), lounges in her basket and snacks on mince, mixed with manuka honey by her adoring owner, yoga teacher Kirsten.

That’s not cheapo supermarket honey, oh no — manuka costs upwards of £25 a jar. And the lucky mongrel doesn’t even have to put her nose in her bowl because Kirsten spoonfeeds her. 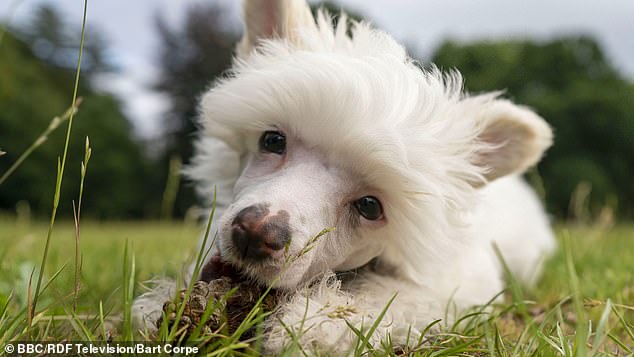 Puppy Fabio has life sussed. He’s a Chinese Crested Powderpuff, a breed so affectionate that they are also known as Velcro dogs

Elina had a hard start in life, abandoned at the side of the road in Cyprus. But she’s on Easy Street now. Kirsten fell in love with her because she looked ‘wise’. Wise? That animal is a blooming genius.

Puppy Fabio also has life sussed. He’s a Chinese Crested Powderpuff, a breed so affectionate that they are also known as Velcro dogs. They stick to you.

Owner Alyssa treats him like a dolly, dressing him up in designer clothes that match her own. He’s got a bow in his ears and, when he’s asleep, Alyssa ties little doggy trainers on his paws.

Walking in hi-top sneakers might be a problem for some pups, but not Fabio — he travels by pram.

Because this is BBC2, occasional tips on dog training are thrown in. But the pets aren’t really the point: what’s fascinating about this six-part series is the behaviour of the besotted humans.

Father-of-five Reggie has a dog phobia and was adamant that he wanted nothing to do with the slobbery Staffie cross, Sage, that his wife Cheryl bought for their children. But Sage worked his canine magic, and Reggie started to fall in love despite himself.

Ratings triumph of the year:

The UK debut of I’m A Celebrity (ITV) brought the biggest telly audiences — aside from the Queen’s Covid broadcast and the like — since Gavin And Stacey last Christmas: 12 million. It’s back to its irresistible best.

He insisted that he’d never take the blasted creature for a walk, but immediately conceded that ‘stranger things have happened this year, I suppose’.

A day later he was crouched on the pavement, picking up after Sage. That’s the incontrovertible proof that dogs are in charge — they are the true masters and we’re the obedient servants who clear up their mess. Dogs are Paul O’Grady’s usual subject, but his Great British Escape (ITV) saw him getting pally with alpacas instead.

He visited a farm near his home in Kent which runs mindfulness sessions in fields where dozens of these South American ruminants are grazing. Paul tried crossing his legs and focusing on the moment, but his attention span is too short for meditation. ‘No form of yoga’s for me, no,’ he sniffed.

The pleasure of his local travelogue is his refusal to be impressed by much. Trudging down to the sea’s edge to try shrimp fishing, he grumbled: ‘Tell you what, this shingle might look good but it’s a nightmare to walk on.’

And unlike most comedians exploring the British landscape for telly, he doesn’t want to drum up the tourist trade. ‘Don’t come down on a bike,’ he warned, ‘riding four abreast, thinking you’re in an Enid Blyton book, cos you’re not.’

He can be as mardy as he likes, but there was no disguising the beauty of Romney Marsh, filmed during the summer heatwave. The way the shallow lakes reflect the clouds is unearthly, as though the sky has been painted onto the ground.

Now there’s something to meditate on.