Here’s how the staff at Britain’s wildest hotel know when a hen party on the top floor went with a bang.

It isn’t just the half-empty bottles of vodka in the toilet, and the broken stiletto shoes over the floor.

It isn’t even a question of whether the bow-tied male stripper, or ‘butler in the buff’, went home with a satisfied smile and a hefty tip.

What the clean-up crew look for, revealed The Grand Party Hotel (BBC1), is a puddle of fake tan in the Jacuzzi. That’s the surest sign of alcohol-fuelled, pre-nuptial excess — a dozen shrieking women guzzling Prosecco in the hot-tub, in a kind of bridesmaid soup. 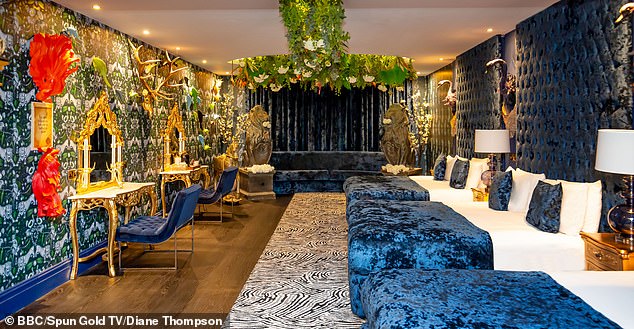 For revels like these, only the swankiest venue will do, and the Shankly Hotel in Liverpool offers sheer class dipped in glitter with a plastic cherry on top.

Every party suite doubles as a dormitory with six, 12 or even 24 beds. Think of it as a Christmas office do with no escape.

You and all your colleagues could drink yourselves into a stupor, then collapse into bed without ever leaving the room.

And the decor! This is what the Palace of Versailles would have looked like if they’d had leatherette and spray-painted polystyrene in Louis XIV’s day.

One set of rooms, imaginatively named the Jungle Floor, included 6ft-tall fake stone lions and plastic rhino heads on the wall. The first guest was an ‘Instagram influencer’ named Jade and she was understandably impressed.

If this were a Channel 4 show, the film-makers would be wallowing in the monumental tackiness of it all. But it’s the BBC, and Auntie was a little bewildered — horrified by how cheap and nasty it was, but afraid of appearing snobbish by saying so.

Panorama of the week:

‘Some people pay millions for a view like that,’ said high-rise tenant Max, admiring the Shard from his window in Council House Britain (C4). ‘I can just get up, have my cornflakes in my underwear and watch it in the morning.’ Luxury!

The documentary was only comfortable when it focused on new general manager Lyndon, hired to sort out the hotel’s grim online reviews.

In his jacket with its green suede collar and scarlet hankie, he looked as though he’d fit right in — but his workers had other ideas. ‘If he comes in all guns blazing,’ warned one with an ominous grin, ‘I don’t think it’s gonna work out.’

The staff didn’t like being chided for leaving the rooms half cleaned, or being called work-shy. And Lyndon didn’t seem to understand the pride they took in helping get parties started, by downing shots of limoncello. The hotel’s director had to take Lyndon on one side and explain that, at the Shankly, the employees expect to be treated like guests.

Of course they do. At a party, everyone’s your best mate.

Lyndon didn’t get it. No surprise, then, that a caption at the end of the hour told us he’d left ‘to pursue a new opportunity’.

The sea lions in London Zoo: An Extraordinary Year (ITV) were preparing to pursue new opportunities at another menagerie, and their keeper Alex was beside herself. She spent more time with her beloved animals than she did with her family and she couldn’t cope with seeing them sent away. Bereft, she was on the point of chucking the job in altogether. Then the pandemic struck and the zoo cancelled all animal transfers. The sea lions were staying put.

One lovely shot saw the alpha male sea lion, Dominic, rearing up to clasp Alex in his flippers, while she flung her arms around his neck. When zoo documentaries capture moments like this, they are amazing.

The female huntsman spider, filmed mating to the soundtrack of Je T’Aime by Serge Gainsbourg and Jane Birkin, was less affectionate. She ripped her boyfriend apart and ate him. I bet her hen party was real carnage.