Who Wants To Be A Millionaire? Celebrity Special (ITV)

We needed that. ­Britain’s Got Talent (ITV) is back, and the show was ­bursting with superb upbeat acts to send the ­nation’s spirits surging.

BGT can be a ruthless spectacle — in years gone by the judges have shattered the dreams of one would-be star after another, ­pressing their raspberry buzzers to cut performances short from the very start. But this was an opening episode crammed with winners.

Either the standard of the ­country’s amateur choirs, dancers, comics and ­magicians has ­suddenly improved or impresario Simon Cowell took the decision to give us lots of early treats.

These included a dazzling father-and-son magic act, which ­challenged Cowell to think of a number and sign a playing card (so far, so ordinary) and proceeded to pull off a staggering stunt that went far beyond sleight of hand. 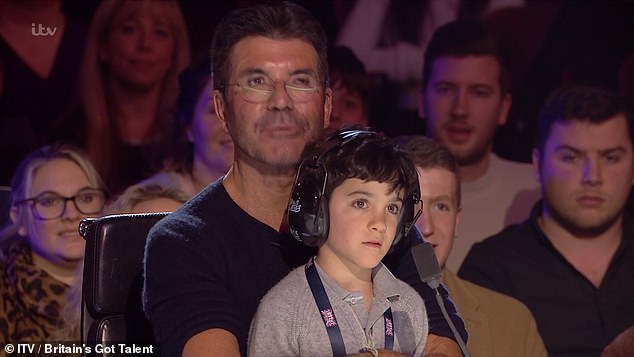 Judge Simon Cowell beckoned little Eric, aged six, from the audience to join in the applause

Cowell wrote down his son’s name, Eric, and picked the five of hearts. Conjuror James Piper unveiled a handwritten poster that said ‘five of hearts’ in curlicued ­letters — then flipped it upside-down. Magically, the letters now read ‘Simon and Eric’.

Cowell beckoned little Eric, aged six, from the audience to join in the applause, and in doing so highlighted my persistent gripe with BGT: too often it looks stage-managed.

Does Eric follow his dad to every audition? If not, was it just a ­coincidence that he was there for this trick . . . or did Cowell have prior warning of what was about to happen? If so, the magic evaporates.

Villain of the Weekend:

The face of Mr Bellasis (Adam James), as he learned some disagreeable news in Belgravia (ITV), was quite the picture. What a pity those fine houses didn’t need gargoyles. His snarl made him the perfect model.

The same applies to those cut­aways when members of the audience are caught ­whispering comments that sum up the moment.

Either the director is filming ­hundreds of people in the crowd all the time, which is a creepy thought, or we’re looking at actors.

Britain’s Got Talent is at its best when the sparkle is spontaneous. Scripted ad-libs from the cheap seats can only spoil that.

Ant and Dec were at pains to point out that the auditions were filmed before lockdown. They had less to say about what will happen when it’s time for the live rounds.

In fairness, their guess is as good as anybody’s, and coronavirus has already put the kibosh on their Saturday Night Takeaway finale.

If the final has to be postponed, let’s just all agree that the wonderful Sign Along choir are 2020’s BGT champions. Children with all sorts of disabilities and ­communication disorders filled the stage, joined by singers for a ­fabulous version of This Is Me, from the musical The Greatest Showman. Reader, I blubbed.

Inspirational 18-year-old Jade Kilduff started signing to songs to help little brother Christian, four, learn to talk despite his ­cerebral palsy. Their faces painted with glittery rainbows, her choir demonstrated how wonderful Britain’s carers are, and why we must never take them for granted again. 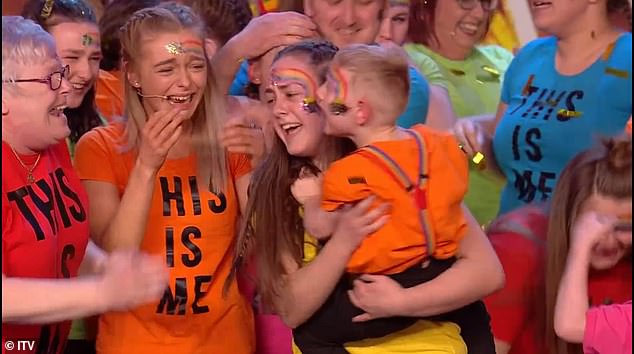 If the final has to be postponed, let’s just all agree that the wonderful Sign Along choir are 2020’s BGT champions 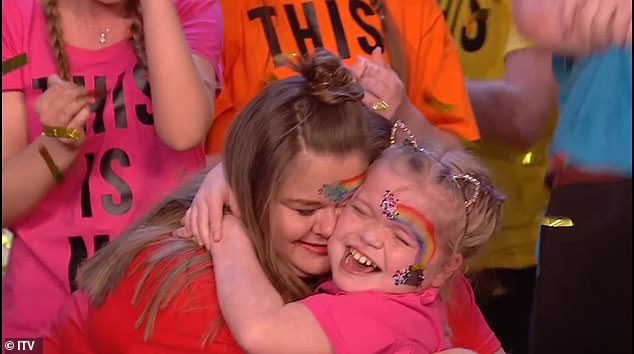 Children with all sorts of disabilities and ­communication disorders filled the stage, joined by singers for a ­fabulous version of This Is Me, from the musical The Greatest Showman

The other big Bank Holiday telly treat starts tonight: Quiz, (see Pick Of The Day, left). As a warm-up, Jeremy Clarkson ­presented a celebrity edition of Who Wants To Be A Millionaire?

He needn’t have bothered. This gameshow has survived more than two decades because it’s fascinating to see what the ­pressure of gambling a colossal sum on every answer can do to ordinary people — the ones Clarkson dismisses as ‘librarians from Merthyr Tydfil’. Celebs don’t feel the same pressure.

As a result, they’re far less interesting. Richard Osman, a quiz host on House Of Games, said he would take no risks — then lost £32,000 on a wild guess. He was watchable, but he’s no librarian from Merthyr Tydfil.