Sucking on her nicotine vape like she’s siphoning gasoline, smalltown detective Mare Sheehan is a single mother to her whole damn neighbourhood.

Mare (Kate Winslet) scolds petty criminals the way other mums give their teenagers a telling-off for sneaking out on a school night. Drug addicts and petty thieves are her naughty toddlers.

It’s no coincidence that her name means ‘mother’. She’s not Mary or Maria, she’s Mare — spelt ‘mère’ in French. And she’s a force of nature. 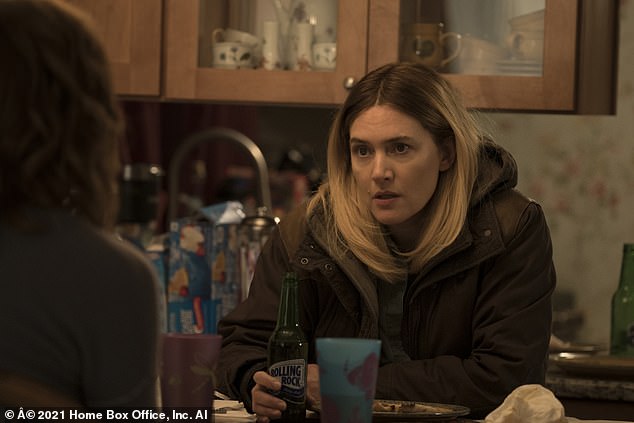 Hollywood is full of British actresses, but none of the others would dare tackle this role

‘Doing something great is over-rated,’ she tells her police partner, Colin. ‘People expect that of you all the time. What they don’t realise is you’re just as screwed up as they are.’

There’s one episode still to come in this series, so no spoilers here if you haven’t seen the show yet. But I promise you will — Mare Of Easttown (Sky Atlantic) has become the best crime drama for a decade.

Winslet is magnificent. Permanently scowling, her face puffy and her hair scraped back, she stomps the streets like a hangover in search of a fistful of paracetamol.

Hollywood is full of British actresses, but none of the others would dare tackle this role. Not only is it doggedly unglamorous, with Mare the grandmother to a three-year-old boy, but it demands a working-class American accent and coarse swagger. One hint of Jane Austen among these Bruce Springsteen characters would ruin the show’s authenticity.

The opening hour appears to set up a standard crime story, with a murdered girl found in the woods and a complex array of suspects . . . most of them people Mare has known all her life.

On one level, the plot continues to follow a standard pattern. Mare’s chief of police is losing patience with her. She’s paired with a new partner whose methods frustrate her. The investigation alienates her friends and family.

But this predictability is an illusion. The real story is packed with shocks. Something unravels in episode two that leaves you speechless — and, after that, there’s no way to guess what will happen next.

The visual style borders on American Gothic, as the electrics go out and mist swirls through the town. Crimes overlap more crimes: child abuse, domestic violence, kidnap, rape, murder and robberies fuelled by drugs and alcohol. 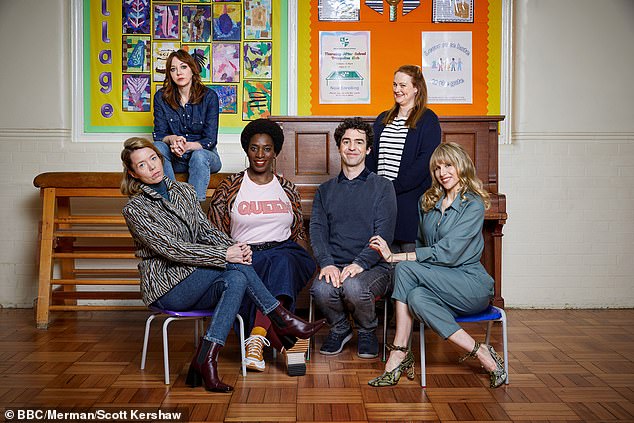 This series of Motherland, co-written by Catastrophe’s Sharon Horgan, has made the comedy gentler, paring back its moments of excruciating embarrassment and revealing sadder, kinder aspects to its characters

And, on a deeper level still, this is a drama about the effects of grief and mental illness on an extended family.

The last TV crime epic to try anything half so ambitious was Breaking Bad. Mare Of Easttown is even better than that.

Anna Maxwell Martin also delivers an extraordinary performance as a mum at the end of her tether in Motherland (BBC2). She’s so different from the devious police pen-pusher she portrays in Line Of Duty, she’s almost unrecognisable.

This series of Motherland, co-written by Catastrophe’s Sharon Horgan, has made the comedy gentler, paring back its moments of excruciating embarrassment and revealing sadder, kinder aspects to its characters.

Sweet stay-at-home dad Kevin (Paul Ready) is being kicked out of the house by his estranged wife, and is starting to fall for Liz (the marvellous Diane Morgan).

Liz doesn’t quite know what to do with his timid affection, but she knows what isn’t going to happen. ‘Get off!’ she snaps, if he so much as brushes her elbow.

Meg (Tanya Moodie) makes light of her cancer diagnosis, but she might be terminally ill. Even the appalling Amanda (Lucy Punch) is showing hints of a likeable vulnerability, after lunch with her monstrous mother (Joanna Lumley).

This show has become much more than a series of skits at the school gates. I hope it runs for years.