CHRISTOPHER STEVENS reviews last night’s TV: A house so full of music that even the doorbell plays its part

This House Is Full Of Music

The problem with getting everything delivered via online shopping is that the doorbell always goes at the most inconvenient moments — when you’re halfway through shaving, or down the end of the garden.

Teenage concert pianist Jeneba Kanneh-Mason was losing herself in the opening bars of Chopin’s Etude in E Major, on This House Is Full Of Music (BBC1), when a chime came from the front door.

The 17-year-old’s despairing smile said it all. She leapt from the stool, seized a parcel from the importunate Amazon employee and returned to the piano in a more turbulent mood. 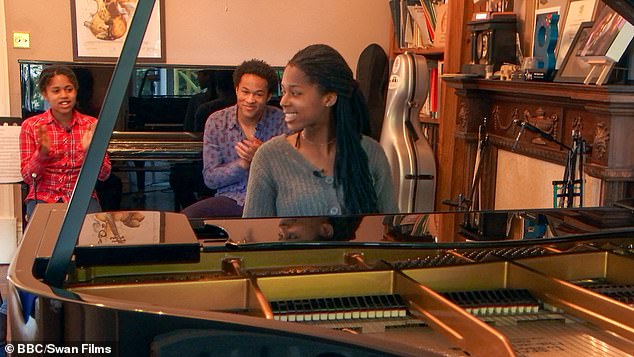 Chopin said he could never write a more gorgeous melody than this one. It is sometimes called the ‘tristesse’, meaning ‘sadness’, and this time Jeneba began to play as though her heart was breaking. The middle section erupted into a furious cascade of notes, full of frustrated anger, before settling down into grief.

All the emotions of lockdown poured out in three minutes. Even the doorbell played its part.

Jeneba, a finalist in 2019’s Young Musician Of The Year competition, is a truly extraordinary instrumentalist, but what’s more astonishing is that she’s one of seven siblings, all exceptionally talented. One of her brothers, cellist Sheku, became famous in an afternoon when he played at a royal wedding, but judging from this hour-long home recital, every one of them is a phenomenon. Aminata, 14, says that music is as natural to them as breathing. It’s almost as constant too — they all practice for nine hours a day.

That presents problems with all of them living at the family home during the coronavirus restrictions. They take it in turns on the pianos, and practise violins and cellos in every other room . . . even the loo.

Getting teenagers out of the bathroom is hard enough, even when they’re not working on a tricky passage from Shostakovich.

The sheer variety of music they chose for this documentary, presented by Alan Yentob, was boggling. Sheku and a family friend, Plinio, played an arrangement of the folk song Scarborough Fair on guitar and cello in the garden with the foxgloves dancing.

Royal insight of the weekend:

Harry and Meghan hoped they could abdicate their Palace duties while keeping their status. The Queen: Duty Before Family? (C5) pointed out what the pair forgot — the abdication crisis of 1936 haunted HM’s life. Any repetition was destined to fail.

Then all the family joined in an African-American spiritual, full of lush harmonies like a Hollywood orchestra in the Fifties. And when the neighbours went outside to clap for the NHS, they kicked up a lively klezmer tune on clarinet and accordion.

Their mother was born in Sierra Leone, their father’s family comes from Antigua, the younger girls go to a Catholic school in Nottingham and they all love Jewish dance music. Fabulous! In a society where divisions are being exacerbated by sour protests, what a joyful sunburst of hope this family is. They embody everything that is best about Britain today.

This is a programme I know I shall watch again and again.

Family talent was also on display as The Voice Kids (ITV) returned, with Will.i.am and his fellow judges looking for the best singing schoolchildren. Twins Betsy and Nancy won applause for their raucous enthusiasm as they squawked through Bring Me Sunshine. But their big sister Connie proved a showstopper when she let rip with a West End musical number, blasting it out like Ethel Merman.

Though the judges aren’t supposed to know who is singing till they turn their chairs around, a suspicion lingers that much of the show is scripted. When invited to pick a coach, the children always hesitate, milking the tension like pros, even if they’re only seven years old.

But if it’s stage-managed, does that matter? This is still solid family entertainment.