How To Keep Your Dog Happy At Home

Let’s Fishing Enjoy is the incoherent slogan of a restaurant called Zauo in Tokyo, where diners scoop fat bream or flounder from a shallow pond beside their boat-shaped tables. 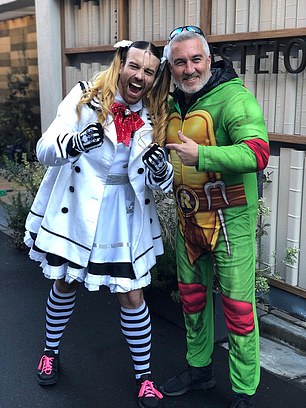 Paul was supposed to be the innocent abroad, out of his comfort zone, in Paul Hollywood Eats Japan

Minutes later they are tucking in to the freshest sashimi, or raw fish. Paul Hollywood Eats Japan (C4) saw the Bake Off judge try it — looking such a fish-out-of-water himself that he was lucky not to end up gutted on a plate.

Paul was supposed to be the innocent abroad, out of his comfort zone. But there’s nothing innocent about the hair-gelled baker and he ended up looking simply uncomfortable.

Whether he was silently gritting his teeth in a karaoke booth or go-karting with a cross-dressing wrestler called Ladybeard, Paul never lost the uneasy air of a man who has travelled halfway round the world to make a show he doesn’t understand. The concept of wry, self-deprecating humour is beyond him — he thinks ‘wry’ is a fancy name for brown bread.

Laughing at himself is alien to his nature, so he was constantly trying to turn the format into something he understood: a foodie travelogue.

Like those other over-inflated egos on sticks, Gordon Ramsay and Gregg Wallace, Paul loves to boast about his ‘palate’. He honestly believes he has a superior ability to taste and swallow food, as if eating makes him an artist.

Taking a deep-fried, knotted eel spine between wobbly chopsticks at a tempura restaurant, he declared: ‘It’s like a Michelin-starred pork scratching.’ The fluorescent orange contents of a Pancan or tinned bread tasted ‘chemically’, he said.

Viewers could guess that much by looking at our screens. There was no evidence of a mystically enhanced palate in those descriptions.

Unable to poke fun at himself, Paul has an instinct for mocking others. At a remarkable ramen bar called Nakiryu, where chef Kazumasa Saito spends 12 hours a day concocting noodle broths steeped in complex flavours that he sells for just seven quid a bowl, the lad with the Liverpool accent thought he’d have a laff.

Good health of the night:

Historian Ruth Goodman visited a ruined abbey on Inside The Factory (BBC2) to discover how monks looking for the elixir of immortality invented something else by accident . . . boozy liqueurs. Well, that’s their story.

As he slurped his ramen, he produced a Pot Noodle and invited Chef Saito to sample it, pretending it was a British delicacy. The cook complied and remarked with grave politeness: ‘I would not buy this for myself.’ Paul snorted like a schoolboy who has tricked a teacher into treading in something unmentionable. Ever since Clive James discovered the Japanese gameshow Endurance — in which young men competed to see who could survive sadistic tortures the longest — British telly has delighted in marvelling at the weirdness of the Orient.

But if the best we’ve got to offer Japan is a boorish, self-important show-off, I’d say the joke is on us.

The prize for sending himself up in a good-natured way went to Ben Fogle, who took his black labrador, Storm, to a pets-and-owners yoga class, to try ‘doga’, in How To Keep Your Dog Happy At Home (ITV). All the other mutts were golden labradors and retrievers and they climbed all over Ben. By the end of the session, his sweatshirt was thick with moulted dog hairs. ‘My wife will think I’ve been with a blonde!’ he wailed.

We don’t really need lessons in keeping our pooches happy in lockdown, because most of them are just thrilled to have us at home every day. But it’s fun to meet the celebrities’ best friends.

The double Olympic champion boxer Nicola Adams, one of Britain’s greatest ever sportswomen, dotes on her tiny Pomeranian, Bailey, who is at her heels even in the gym. ‘He might look cute and harmless,’ she said, ‘but he’s got a good mean stare.’