EXPRESS INFORMER > News & Politics > CHRISTOPHER STEVENS: Is that an unzipped egg… or bald Gregg Wallace with a big grin?

CHRISTOPHER STEVENS reviews last night’s TV: Is that an unzipped egg… or bald Gregg Wallace with a big grin?

Buying the birthday presents for Bouncing Gregg Wallace must be so easy. The simplest things fill him with excitement.

Let him unwrap a yo-yo or a hula hoop and I bet his little face would be beaming all day long.

He watched a truck unload a dumpster full of iron ore into a skip on Inside The Factory (BBC2) and his joy was unconfined.

‘Wow!’ he bellowed. ‘Woo-wee! I have never seen a lorry empty its load so fast. Incredible!’ 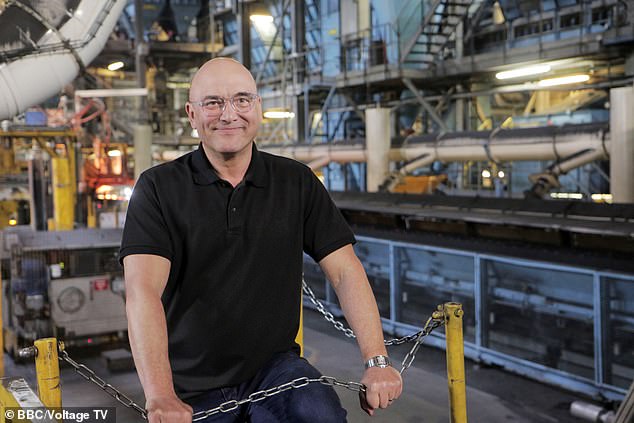 Obviously, gravity being what it is, sackfuls of potatoes or boxes of crisps would have tumbled out at exactly the same speed as the unsmelted iron. But telling that to Gregg would be heartless.

He’s still at that age where he thinks a big slice of cake tastes better than a small one. A movie with ten car chases is twice as good as a movie with only five. And heavy things fall faster.

Bouncing Gregg didn’t gawp in wonderment at the heap of iron ore in its dust cloud for long. He bounded away to see the next exciting machine, with a grin stretching around his bald head like an unzipped egg.

This edition of the ‘how-things-are-made’ show came from the Le Creuset plant in northern France. Here, the enterprising French produce iron cookware for export to us Brits, so that we can make Lancashire hotpot.

If you’re wondering how we managed before the Common Market, historian Ruth Goodman had a fascinating story about stew during the Industrial Revolution. I’m not being sarky: it was genuinely interesting.

Mother love of the night:

Prue Leith, unlike certain Bake Off judges we could mention, usually keeps her family life out of the limelight. But she talked candidly about adoption in Journey With My Daughter (C4), often in tears. What a showstopper.

Before heading to the cotton mills for a 12-hour shift, Manchester mums would chop some veg and a scrag-end of mutton into the family’s ancient black pot and take it to the street’s communal oven, or the bakery, where it could simmer all day long. Come nightfall, a hot meal was waiting.

Think of that next time you watch Belgravia. All the male weavers at Mr Charles Pope’s cotton factory are cooking up insurrection, but their working wives are smarter: they’ve got a hotpot stewing for when everyone gets home.

Charles and Diana Ingram were in the mother of all stews by the end of the second part of Quiz (ITV). They appear, in Chris Tarrant’s words, ‘as guilty as sin’, after the Major cheated his way to the jackpot on Who Wants To Be A Millionaire?

But there was a whiff of redemption, as the Ingrams’ barrister (played by Helen McCrory) popped up and stared into the camera as if we were the jury and she was about to wrap us around her finger.

How will she convince us that these colossal chancers were honest quizzers who won the pay-out fair and square? I am agog to find out.

This true-life drama has been all kinds of wonderful, not least because of the pitiless portrayal of the TV execs as vain, swaggering bullies and sycophants. It is ITV’s answer to the BBC sitcom W1A, except that here all the incompetence and back-stabbing ends in a national scandal.

Do they realise how appalling they look . . . and do they secretly love it?

The poor old Ingrams, who now eke a living by selling home-made jewellery at craft fairs, can’t be enjoying it much.

Think of that perennial pub conversation where friends name the actor who would play you in a story of your life.

If Matthew Macfadyen is cast in your shoes, you know you’re in trouble. The word ‘hangdog’ was coined to describe his face.