Unless you are Martin Luther King, no one over 40 should be bleating on about their ‘dream’.

Grow up. Face the fact you’re never going to be a test pilot, a rock musician or a Vogue model.

This is particularly important if you’ve got four children and your vision involves spending £2 million to uproot the family, as Sarah Beeny’s husband Graham wants to do. 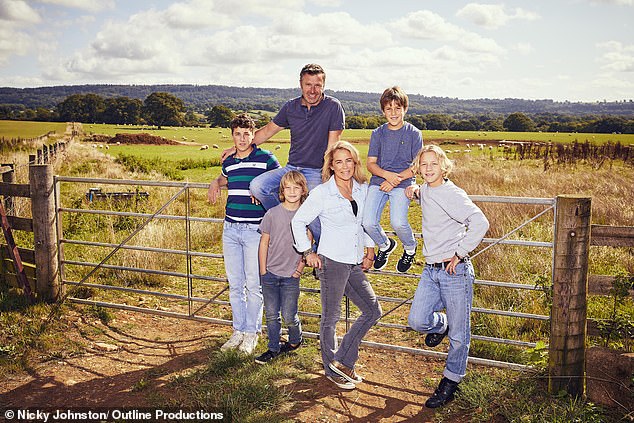 The property show presenter spelled it out bluntly that she didn’t share his ‘dream’, at the beginning of New Life In The Country (C4). But Graham, an artist, insists on selling up in London to build a miniature stately home in a Somerset field.

‘I am putting everything I have in his hands,’ she said glumly. ‘I went along with it because he’s wanted to do it all his life. Sometimes you’ve just got to jump into the abyss.’ How much of this was Sarah, 48, playing up her fears for the camera, and how much was real marital tension, is up to the viewer to decide.

But throughout the first episode she sounded like an unhappy woman trying to convince herself to accept an idea she hates.

The only time she sounded relaxed was on a visit to their house in the city, the place where she says she expected to live for the rest of her life. She showed us her favourite rooms: ‘I’m really comfortable in London — when I come back, I do feel I’ve come home. That’s hard to rub out.’

Meanwhile, Graham was trundling round a field on the Somerset Levels, like Capability Brown in a digger, planning where to put the landscaped gardens and the follies. The couple tried to start work on an ornamental lake, while they waited for a visit from the planning officer. That lasted about ten minutes, before Sarah left her husband to it.

Safe gamble of the night:

The world’s smallest bicycle, barely 6in high, came in to The Repair Shop (BBC1). Two chirpy sisters told how their grandad would ride it, sporting a top hat . . . and how he’d bet anyone a fiver they couldn’t ride it, too. He never lost his money.

Their four boys threw themselves into the adventure, helping on a neighbouring farm at lambing time. The farmer wasn’t convinced, though. He glanced at Sarah and Graham, shouting encouragement from the sidelines like proud parents at school sports day, and muttered: ‘Townies!’

The whole enterprise appears to be a disaster. Maybe that’s simply the way their marriage works best, and after eight weeks Sarah will have learned to love making cheese and keeping bees in her rural idyll.

For now, her life looks so strained at the seams that it’s almost embarrassing to watch. It’s certainly nothing like the usual paeans to country living that we get from Ben Fogle and Kate Humble. If you can bear the discomfort, this is a very different sort of show.

Former newsreader Michael Buerk was going over familiar ground on How Britain Won WW2 (C5), a 165-minute epic that would have been far better broken into five or six half-hour segments.

Last year he presented a series about the devastating effect of the Blitz on ordinary British lives, and parts of this overlong documentary drew on the same research. The rest promised to tell stories of everyday heroes.

When Buerk and co-presenter Arthur Williams stuck to this brief, for example with a portrait of teenage Dunkirk defender Alec Jay, it was excellent.

But too many segments focused on the top brass, such as Air Chief Marshal Hugh Dowding, or celebrity characters such as Ian Fleming.

Other stories, about Bletchley Park and the French Resistance, were just too well known. The show had a good idea, and then lost sight of it.