Christina Ricci’s estranged husband James Heerdegen has filed a temporary retraining order against the actress where he makes blistering claims that she is a drunk and addicted to popping pills.

In court documents obtained by DailyMail.com, Heerdegen claims that Ricci would get into drunken rages in front of him and their six-year-old son Freddie, black out and then have no idea what she did when she would finally come to.

Heerdegen also claims that he had to check their son’s bottles after pumping her breastmilk for fear of it being contaminated with alcohol she drank from the night before.

‘Prior to our separation in June of 2020, [Ricci] would drink to excess on an almost daily basis causing her to engage in emotionally abusive and offensive conduct directed towards me wherein Petitioner during her rants and raves would typically call me a ‘fu**ing cu*t,’ he wrote in the filing.

Heerdegen claimed Ricci would ‘typically ”black out” after drinking to excess, and upon waking, have no memory of the events and/or abusive conduct that she had engaged in’.

The filing comes after Ricci detailed how she once had to hide knives in the house because she feared Heerdegen could kill her after he allegedly said he would only feel sorry for her if she was ‘dismembered into small pieces’.

A judge granted Ricci a restraining order against her Heerdegen on Wednesday.

In court documents obtained by DailyMail.com, Heerdegen claims that Ricci would get into drunken rages in front of him and their six-year-old son Freddie. They’re pictured in January 2019

The documents also include messages between Ricci and Heerdegen where she apologizes for her alleged outbursts.

‘I get it this time,’ Ricci writes. ‘This morning was a huge alert’.

In other messages Ricci he labels herself a ‘monster’ and says she’s ‘detoxing.’

Heerdegen claims at one point she was so drunk she fell over while holding their baby in her arms and says she drives their son in a car while under the influence.

He goes on to claim that Ricci once terminated a pregnancy without his knowledge.

The 40-year-old actress has also accused Heerdegen of allegedly beating her, throwing her into a fire pit and mocking her with pig noises before she filed for divorce in June last year.

Ricci’s allegations were included in a request for a domestic violence restraining order against Heerdegen, which a judge approved late on Wednesday.

Photos of bruises on her hands, wrists and arms were included in the court documents, which were obtained by TMZ, as proof of Heerdegen’s alleged abuse.

As a result, a judge ordered Heerdegen to remain at least 100 yards away from Ricci and their son Freddie. He also cannot have visitations with the boy and must stay away from the family’s dog. 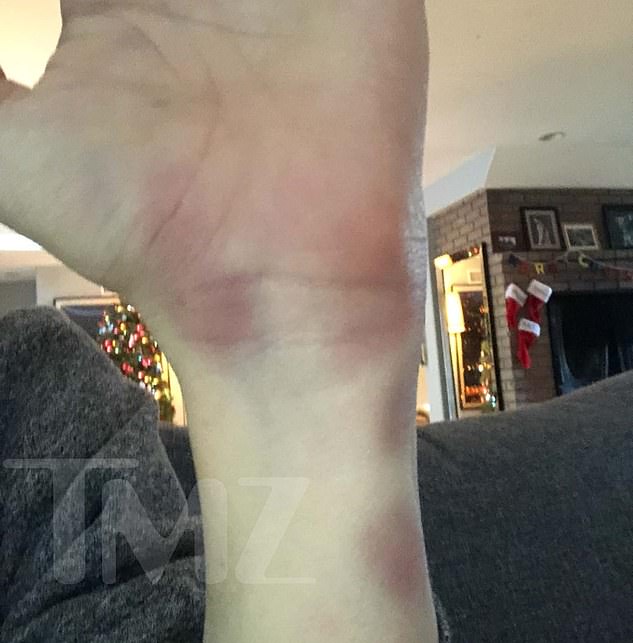 Photos of bruises on her hands, wrists and arms were included in the court documents, which were obtained by TMZ , as proof of Heerdegen’s alleged abuse

He said Heerdegen, who works as a cinematographer, intends to file his own restraining order against Ricci that he claims will reveal ‘her abusive conduct fueled by alcohol and substance abuse’.

In the filing, Ricci claimed the alleged abuse at the hands of Heerdegen started in late 2019.

During a family vacation in New Zealand that year, the Addams Family star claimed she feared Heerdegen ‘could kill me’ because of comments he made.

‘He said the only way he could feel sorry for me is if I were dismembered into small pieces,’ Ricci alleged in the filing.

‘That night I hid all the knives in the cabin where we were staying. I feared for my life and the life of our son. I slept in a separate bedroom with Freddie and I locked the door.’

She claims Heerdegen ‘brutally attacked’ her in December 2019 where he allegedly beat her, spat at her and mocked her with pig noises.

This incident was what Ricci said sparked her decision to divorce her husband of eight years. 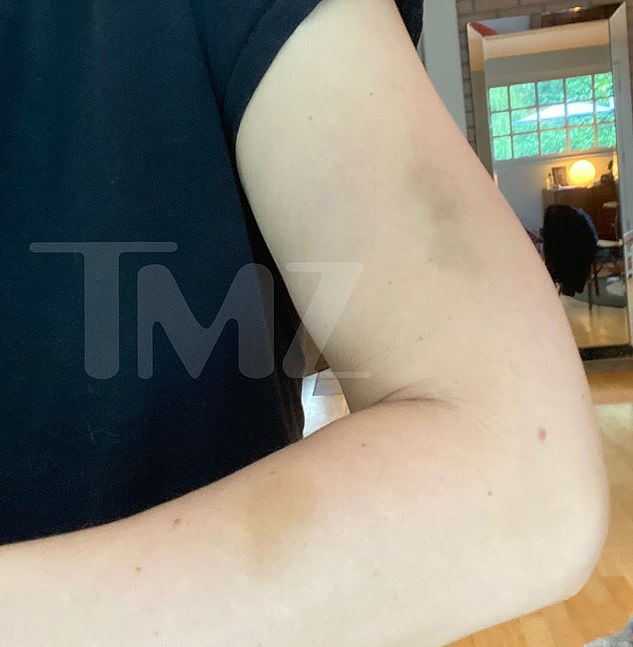 Painful: The actress, 40, gave proof of her injuries, which she said were a result of Heerdegen’s attacks, after she ‘found herself trapped in a house with a violent abuser’ during lockdown 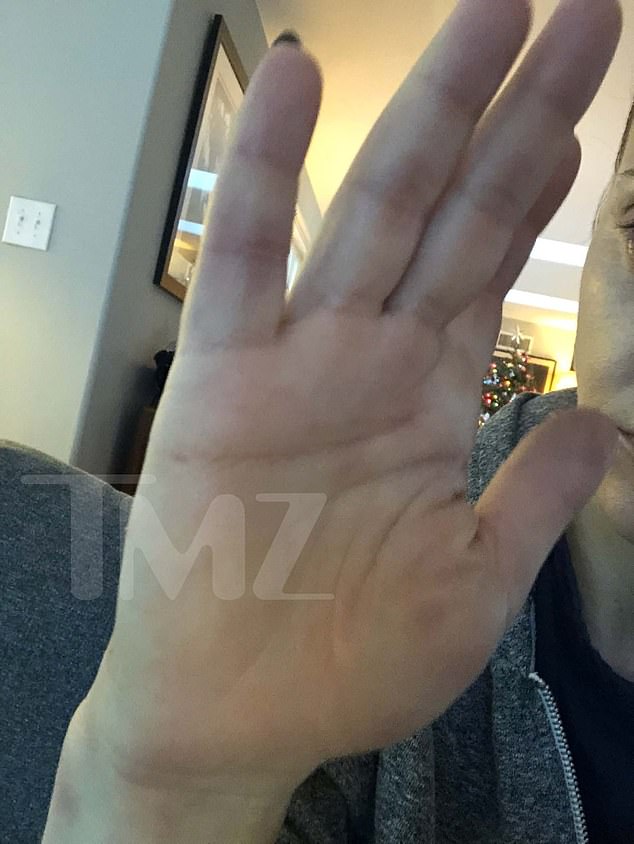 Injuries: Ricci, who is represented by lawyer Samantha Spector, submitted court photos of bruises and other injuries she said were a result of Heerdegen’s attacks on her

Ricci claims she told Heerdegen she wanted a divorce but it was hindered by the start of the COVID-19 pandemic in March when lockdown quarantines were first initiated.

She said in the filing that she found herself ‘stuck in the house with a man who had physically and emotionally abused me, and knew that I wanted to end the marriage’.

Ricci alleges that Heerdegen ‘focused solely on punishing and terrorizing me 24 hours a day… I was afraid to sleep at night.’

The filing details two instances in June where Heerdegen allegedly physically attacked her.

The first was June 2 when she claimed Heerdegen allegedly chased her through their house to stop her from calling 911.

‘He grabbed my wrists and hands, dragged me, and slammed my body into the fire pit we have in the yard,’ she said in the filing. ‘I suffered cuts, bruising, and soreness of my hip, which still causes me pain today.’ 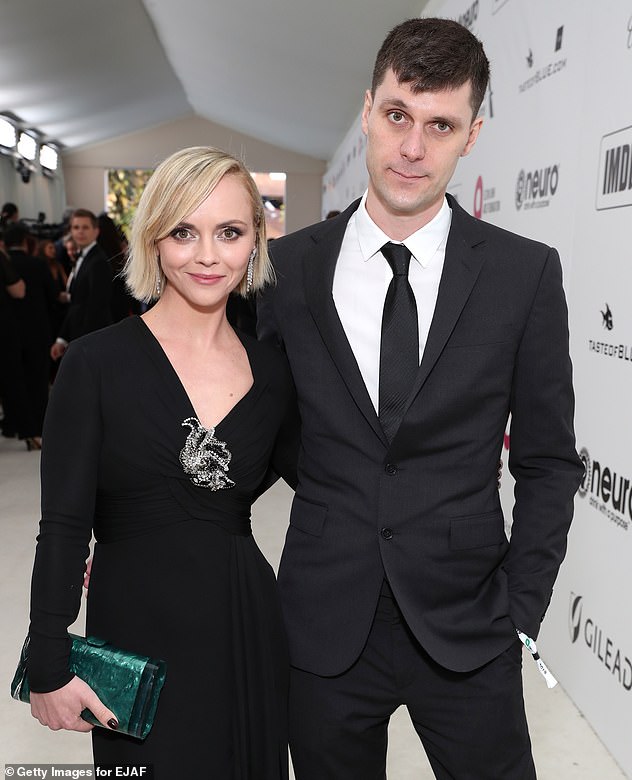 The couple married in 2013 after two years of dating. Ricci filed for divorce in June 2020 citing irreconcilable differences as the reason why she wants to end the marriage. They are pictured in February 2019

The second occurred on June 25 when Ricci alleged that her estranged husband followed her through the house while ‘screaming at me, spitting on me, throwing coffee at me and throwing a chair at me’ in front of their son.

She called 911 in that instance was given an emergency protective order against him that prohibited any contact between the couple.

The court documents detail Ricci’s fear that Heerdegen will harm their son, claiming that he has allegedly threatened to ‘abduct’ the boy.

In addition to the restraining order she requested, Ricci also asked the court to block Heerdegen’s potential efforts to ‘humiliate and embarrass’ her with audio and video clips he amassed during their relationship.

The couple married in 2013 after two years of dating. They met on the set of ABC’s Pan Am.

Ricci filed for divorce in June 2020 citing irreconcilable differences as the reason why she wants to end the marriage.

She is asking for sole custody of their only son.