Christie’s bosses are facing a lawsuit over a £1.3million ancient clay tablet after it was seized in the US amid suspicion it was looted from Iraq after first Gulf War

The ancient clay tablet carries a fragment of the Epic of Gilgamesh, a poem composed more than 4,000 years ago in Mesopotamia. Pictured: Gilgamesh in a statue from 700BC

Christie’s is being sued over the sale of an ancient clay tablet that bears part of a poem regarded as the world’s oldest surviving work of great literature.

The US Department of Homeland Security seized the 3,600-year-old artefact eight months ago, after investigations suggested it had been looted from Iraq after the first Gulf War.

The Hobby Lobby, a Christian-run retailer paid £1.3million to have the Gilgamesh Dream Tablet in its Museum of the Bible in Washington DC.

It filed a lawsuit in Brooklyn, New York, on Tuesday against Christie’s and the unidentified seller of the antiquity, accusing the auction house of ‘deceitful and fraudulent conduct’.

The tablet carries a fragment of the Epic of Gilgamesh, a poem composed more than 4,000 years ago in Mesopotamia – most of which corresponds to modern Iraq.

It tells a story of male tyranny, friendship, heroism and grief over its 12 tablets.

The poem is preserved in one of the earliest writing systems, named after the ‘cuneiform’ or wedge-shape dents made in wet clay with reeds by the scribes who wrote it.

US prosecutors are now seeking to return the 6in by 5in section, which tells of Gilgamesh’s dreams, to Iraq.

The office of the US attorney for the Eastern District of New York said it was imported illegally to the US in the 2000s.

According to court documents, the authorities traced the tablet’s ownership back to 2003, when an unnamed American antiquities dealer bought it from the family of a Jordanian dealer in London.

After the tablet was imported and cleaned, experts in cuneiform recognised it as a portion of the Gilgamesh epic. In 2007, the US dealer sold the tablet, claiming the tablet had been inside a box of items purchased in a 1981 auction in San Francisco, the court papers said. 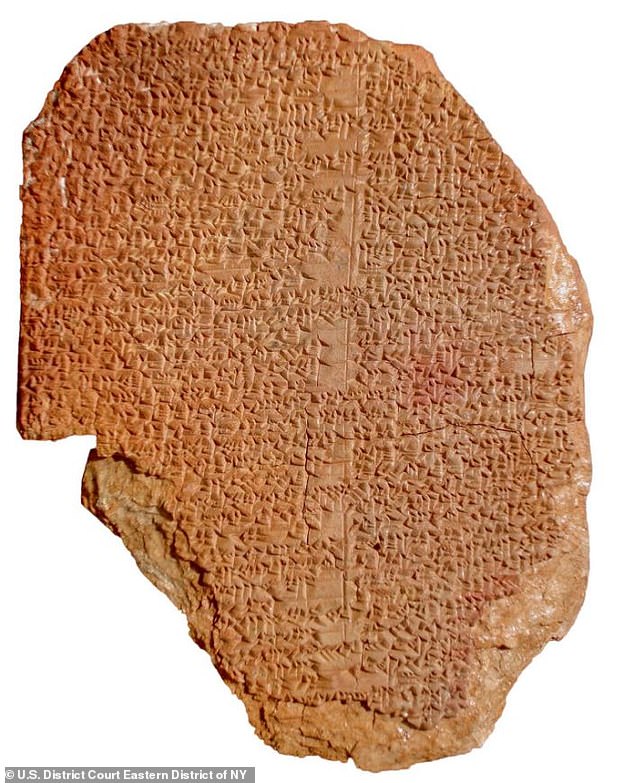 The poem is preserved in one of the earliest writing systems, named after the ‘cuneiform’ or wedge-shape dents made in wet clay with reeds by the scribes who wrote it

A subsequent owner provided that letter to Christie’s, but ‘advised that the provenance would not withstand scrutiny and should not be used in connection with a public sale’, the US Attorney’s Office said.

Through its London office, Christie’s sold the tablet to Hobby Lobby in 2014, but when, three years later, a curator at the bible museum tried to find out more about its provenance, the auction house withheld information, the authorities claim.

The Hobby Lobby suit claims ‘fraud and breach of express and implied warrant’, and seeks the return of what it paid.

Christie’s said: ‘This filing is linked to new information regarding an unidentified dealer’s admission … that he illegally imported this item, then falsified documents over a decade ago.’ It said the ‘illicit activity’ pre-dated Christie’s involvement.

US state attorney Richard P Donoghue said: ‘A major auction house failed to meet its obligations by minimising its concerns that the provenance of an important Iraqi artefact was fabricated, and withheld … information that undermined the provenance’s reliability.’

Prosecutors said the bible museum had co-operated with the investigation. The tablet is in the custody of the Department of Homeland Security.